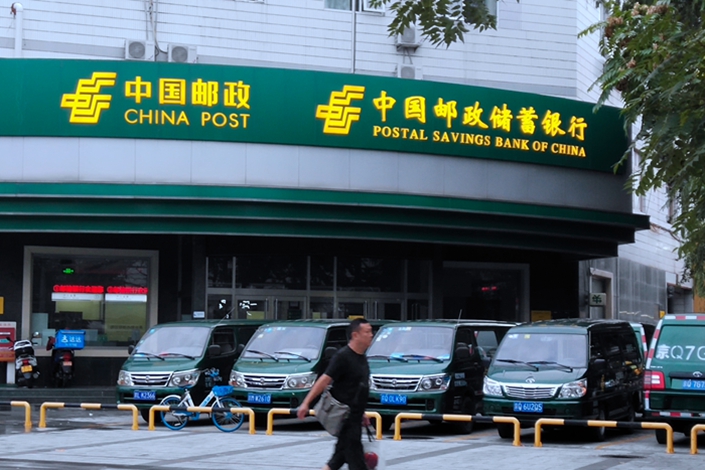 Postal Savings Bank of China (PSBC), one of the country’s largest state-owned lenders, has chosen a new president just days after winning approval from regulators for an A-share initial public offering (IPO).

Caixin has learned from multiple sources that the PSBC will nominate veteran banker Guo Xinshuang as president, filling a position that’s been vacant for 10 months since Lü Jiajin resigned to take up a new position as deputy president of state-owned Bank of Communications Co. Ltd, another of the country’s top lenders.

Guo previously served as an executive director of China Export & Credit Insurance Corp., also known as Sinosure, which provides export credit insurance. The appointment has not yet been formally announced.

On Tuesday, Guo was named a deputy general manager of PSBC’s parent company, China Post Group Corp., according to a company statement (link in Chinese). China Post Group ranked 101 in the 2019 Fortune Global 500 list in terms of revenue.

PSBC, which listed in Hong Kong in September 2016, announced on Oct. 24 that the China Securities Regulatory Commission had approved its application to list in Shanghai and made a further announcement on Tuesday that it would start the book-building process with investors on Friday to determine the price at which the shares will be offered. The IPO prospectus said the company plans to issue 5.2 billion shares on the Shanghai Stock Exchange. Although the document didn’t specify how much the bank plans to raise, based on its closing share price of HK$5.08 in Hong Kong on Friday, the listing could bring in as much as 23.7 billion yuan.

Guo’s appointment comes five months after another change at the top of the company, when Zhang Jinliang, the former president of state-owned China Everbright Bank Co. Ltd., was appointed chairman, filling a position that had been vacant for seven months after incumbent Li Guohua left to join telecom group China Unicom. A senior manager of a joint stock commercial bank told Caixin at the time that this was “the first time that a professional banker has run PSBC.”

The shake-up at the top of PSBC follows the bank’s involvement in a string of scandals that have come to light over the past three years, raising concerns about the lender’s risk management and compliance capabilities.

In December 2017, PSBC was fined 520 million yuan for violating lending rules by helping China Guangfa Bank conceal bad assets. In January 2018, it was fined 90.5 million yuan over a massive fraud involving the sale of 3 billion yuan of wealth management products by one of its sub-branches to raise money to repay forged discounted bills of exchange. Just last month, three branches in Zhejiang and Jiangsu provinces were fined for ineffective loan management.

PSBC was set up in 2007 by state-owned China Post Group Corp., leveraging its parent’s massive nationwide network of post offices to provide basic financial services, especially to small and midsize enterprises and rural and low-income customers. PSBC has some 40,000 outlets nationwide, the most of any Chinese commercial bank.

The lender has been included on the list of “large state-owned commercial banks” by financial regulators since February 2019 and had total assets of 10.1 trillion yuan at the end of the third quarter, surpassing Bank of Communications to become China’s fifth-largest commercial bank. The bank reported a net profit of 54.3 billion yuan for the first nine months of 2019, a 16.3% year-on-year increase, and a nonperforming loan ratio of 0.83%, the lowest among large state-owned banks.