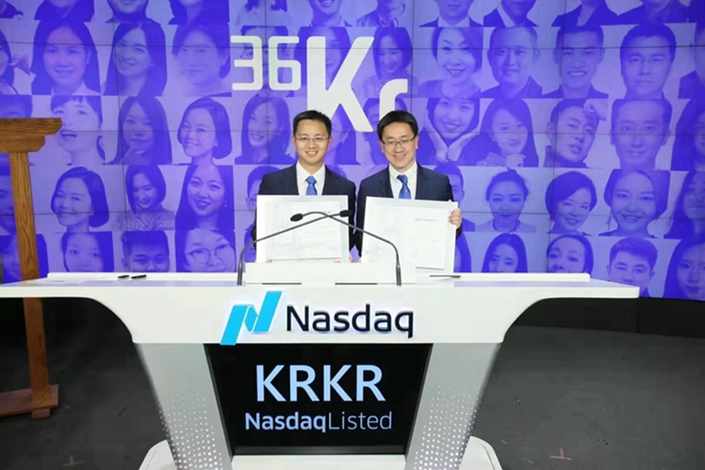 36Kr CEO and Co-Chairman Feng Dagang (right), and Liu Chengcheng, the company’s founder and co-chairman, pose for a photo Friday at the trading debut of the company’s shares on the Nasdaq in New York. Photo: IC Photo

Two Chinese companies making initial public offerings (IPOs) on the Nasdaq raised significantly less than they had hoped, the latest in a string of Chinese listings to lower their targets amid cooling investor sentiment.

The two disappointing listings signal that investors are no longer content to blindly sink money into rapidly growing, money-losing Chinese companies. The change has hammered valuations as startups slash their IPO targets to adapt to the new environment.

36Kr Holdings Inc., a Beijing-based news and data provider, raised $20 million in its Friday debut. It finished the day down 10%, after slashing its initial offering from 3.6 million to 1.4 million American depositary shares (ADSs) at $14.50 apiece, the low end of its indicative price range. The firm initially aimed to raise $100 million, according to a prospectus filed with the U.S. Securities and Exchange Commission in September.

On the same day, health and wellness product retailer Ecmoho Ltd. raised $44 million by offering 4.4 million ADSs at $10 apiece, falling short of its goal to raise $150 million. Shares of Ecmoho rose 1% on Friday.

The two firms’ poor results follow a wave of Chinese companies that have scaled back their IPO ambitions. On Tuesday, home rental agency Q&K International Group Ltd. raised $45.9 million in its Nasdaq IPO, less than half of its target. Youdao Inc., an online dictionary and translation provider owned by internet giant NetEase Inc., was likewise forced to cut its offering by 68.3%, settling for $95.2 million in its IPO last month.

“Asset prices are clearly inflated in China, and I think they are getting a severe discount when arriving on U.S. exchanges now,” said one financial insider who works closely with some of the firms now going to market. “These small capital raises are just adding fuel to the fire that no one trusts these companies. They are trying to list at all costs. Many have unproven business models.”

He noted that U.S. office-sharing company WeWork’s recently aborted IPO and subsequent rescue has reinforced how inflated valuations are for many fast-growing but cash-burning companies. “I think [the] WeWork debacle probably has a big impact right now on showing how the market is fighting back against inflated valuations,” he added.

In October, WeWork secured $9.5 million in a takeover bid from Japanese conglomerate SoftBank Corp., valuing the co-working giant below $8 billion despite a $47 billion estimate in January.

WeWork had planned one of the biggest IPOs in recent years, before investor concerns over huge losses and a complicated corporate structure forced it to withdraw. Investors have also lost patience with money-losing ride-sharing companies Uber Technologies Inc. and Lyft Inc., with both firms’ share prices plunging after IPOs earlier this year.

In addition to lukewarm investor sentiment, Chinese startups face a potential blow from the U.S. government. The White House is reportedly weighing a plan to block Chinese companies from listing on U.S. stock exchanges amid an ongoing trade dispute between the world’s two largest economies.

Doug Young contributed to the report