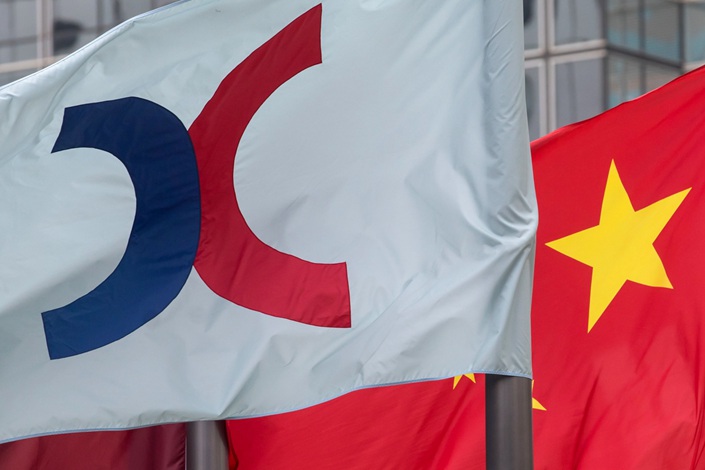 The flag of the Stock Exchange of Hong Kong is seen at the Central district in Hong Kong. Photo: Bloomberg

(Bloomberg) — The slump in Hong Kong equities risks turning into a rout as the protests gripping the city show only signs of escalating.

The Hang Seng Index lost 2.1% as of 10:47 a.m., heading for its lowest close in a month. Local developers and landlords suffered the brunt of the selling as all stocks dropped — a broad risk-off session that’s only happened twice before in the last three years. Recent ebullience fueled by trade war optimism has faded after clashes turned increasingly violent.

Swings in stocks are now becoming more extreme, with traders rushing to buy volatility. It’s been a swift reversal from just last week, when improving sentiment globally meant the Hang Seng measure joined many of the world’s stock benchmarks in overbought territory.

Travel disruptions continued Wednesday, after a night in which students clashed repeatedly with police at a university and roads were blocked and fires set across the city. Trains were not stopping at at least 22 stations in the morning.

“We’re seeing ongoing attrition in Hong Kong with no clear resolution in sight,” said Gerry Alfonso, executive director of the international business department at Shenwan Hongyuan Group Co. “Economic data in Hong Kong isn’t positive. It looks like we’re going to have a tough end to the year.”

The gap between peaks and troughs in the Hang Seng index has widened since August, as headlines on trade and protests affected sentiment more than before. Traders rushed to buy volatility again Wednesday, with the Hang Seng’s version of the VIX rising 9%. Volume for both put and call options also surged.

That’s even as Alibaba Group Holding Ltd. won approval to forge ahead with a Hong Kong share sale that could raise at least $10 billion in the city.

To Kenny Wen, a strategist at Everbright Sun Hung Kai Co., the best way to play the market is to not play it at all.

“It’s very hard to tell which level is safe now,” Wen said by phone. “Investors should cut their exposure until there is some clarity in the ongoing situation in Hong Kong, as well as the trade talks.”

China’s relationship with the U.S. on trade is especially pertinent for Hong Kong as the city’s biggest stocks derive the majority of their earnings from the mainland. Increasing uncertainty on both trade and the protests in Hong Kong is likely to keep investors nervous for now.

“There’s not enough certainty,” said Airy Lau, investment director at Fair Capital Management Ltd. He has no exposure to Hong Kong-listed shares after exiting his positions between May and August. “I don’t think investors expect a resolution to the protests any time soon.”