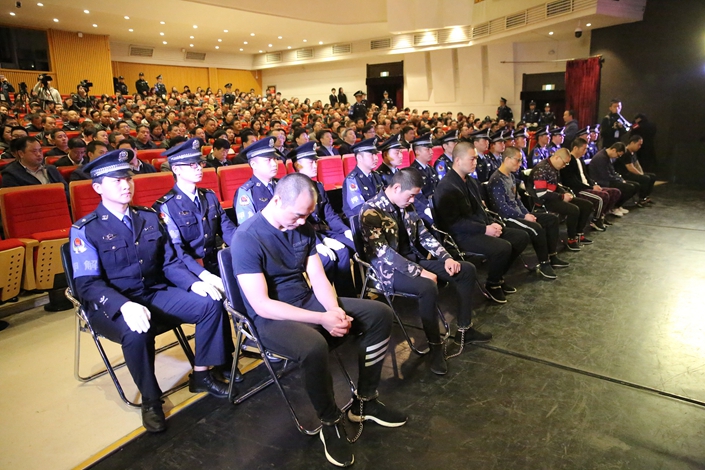 Defendants get sentenced in a predatory lending case in the northwestern city of Xi'an in March. Photo: VCG

In May, a man named Song took out a small online loan of 1,500 yuan ($214) through an app he had downloaded onto his phone. But within five months, his total borrowing had exploded to 350,000 yuan after the platform bombarded him with push notifications and adverts from 55 other connected loan apps luring him to use them to repay his original debt.

The case was revealed by the Ministry of Public Security (MPS) during a briefing last week to highlight criminal activity on the internet that’s become so pervasive it prompted the authorities to start a special campaign in January called “Internet Cleanup 2019.” Part of the offensive involves cracking down on entities that infringe on citizens’ privacy through the acquisition of personal information and data. As of the end of October, the police have investigated almost 46,000 cases of internet crimes and arrested nearly 66,000 suspects for offenses including computer hacking, internet fraud, online gambling and cybersex, the MPS said.

One key focus of the campaign is a practice known as predatory lending, where unscrupulous money lenders use various means to deceive or coerce borrowers to take out loans they don’t need or can’t afford and that carry unfair or abusive terms. To find customers and control lending risks, the online lenders leverage data that’s been collected illegally and pay for support services from companies that provide technology, data and payment solutions.

Unscrupulous and shadowy online lending platforms use the data for risk management to identify fraudulent borrowers, but they also use it to market their loans and collect debts by calling or texting the contacts they have acquired. They often set up “traps” that target young people who can’t live on their income and lure them by offering unsecured loans, Wang Yingwei, head of the Office of Cyber Security of the Ministry of Public Security, said at the briefing.

The MPS highlighted the case of Tianke Anhua (Beijing) Technology Co. Ltd., which developed “Alpha Elephant,” a system consisting of hundreds of apps that offered a “one-stop” shop for online lenders. The system was powered by data companies that provided risk control and debt collection support, as well as third-party payment companies for fund settlement.

“Alpha Elephant” obtained personal information through data scraping and sold it to loan sharks at 0.2 yuan to 1.8 yuan per inquiry to help lower lending risk and support debt collection, according to the police.

Big data companies engaged in data gathering, mining and analysis have mushroomed in China since 2013, coinciding with a boom in the internet finance industry that had a voracious appetite for information on consumers and customers.

Hangzhou-based Tongdun Technology, founded in 2012, was one of the early entrants and became a darling of the financial industry. It has secured more than $200 million in investment through several rounds of fundraising since 2013. Temasek Holdings Pte Ltd., the sovereign wealth fund of the Singapore government, invested in Tongdun in 2017, and IDG Capital, a U.S.-based investment firm, has also provided funding, records show.

In a statement on Friday after the MPS briefing, Tongdun acknowledged shortcomings in its management of clients and its failure to prevent companies using its products for illegal purposes.

But amid growing evidence of violations of privacy and misuse of data, China’s financial and law enforcement authorities have started to take a much tougher line against the industry. Beijing’s local financial regulator is conducting a blanket probe of all big data companies operating in the region to find out whether they are illegally gathering personal information online. The China Banking and Insurance Regulatory Commission’s Beijing branch issued a formal document last month specifying what financial institutions can and cannot do with big data, barring them from working with debt collectors that employ illegal collection methods.