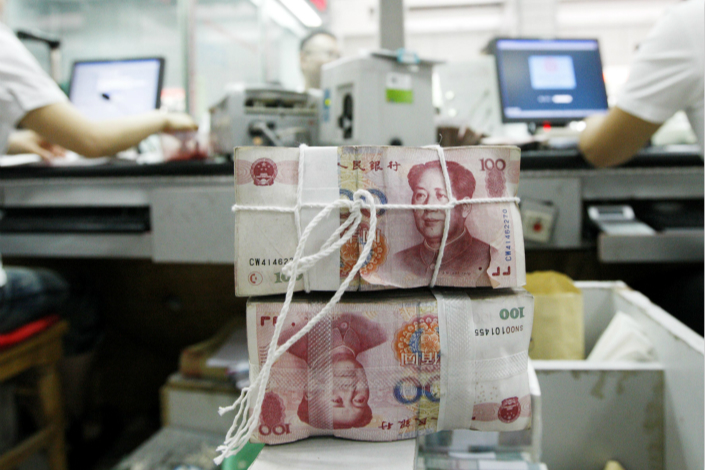 Multiple industry sources said regulators are likely to roll out an extension in order to allow banks to handle the unwinding of their existing asset management products in a more orderly fashion.

China’s financial authorities may extend the deadline for the country’s asset management industry to comply with a sweeping new regulatory framework for a second time after some institutions complained of difficulties in meeting the original target of December 2020.

Analysts at Zhongtai Securities, a Shandong province-based brokerage that offers asset and wealth management services, sent a message to clients on Tuesday that the deadline for compliance will be extended for three years to the end of 2023, Caixin has learned. Several sources close to the central bank and the China Banking and Insurance Regulatory Commission (CBIRC) told Caixin that the note was inaccurate and incorrect, but did not elaborate. Neither agency has commented publicly on the brokerage’s claim.

If true, this would be the second time regulators have extended the deadline since an initial draft of the rules released in November 2017 gave asset managers until June to comply. That goal was subsequently pushed back by 18 months to the end of 2020 when the final version of the regulations was released in April 2018.

China decided to overhaul rules for the asset management industry, which is worth an estimated $16 trillion, as part of an economy-wide campaign to rein in financial risks and control leverage in the financial system that had reached levels the government and international institutions such as the International Monetary Fund warned were dangerous. The revamped asset management rules were aimed at reining in off-balance-sheet “shadow banking” activities that were increasingly seen as a risk to financial stability.

Many commercial banks, faced with having to make significant changes to their asset management operations, baulked at the deadline and lobbied regulators to extend their grace period. Sources with knowledge of the matter have previously told Caixin that around July, the CBIRC held talks with large banks — including Industrial and Commercial Bank of China Ltd., Agricultural Bank of China Ltd., China Construction Bank Corp., Bank of China Ltd. and Postal Savings Bank of China Co. Ltd. — about their progress in implementing the cleanup demanded by the rules. The lenders requested another extension to the grace period for compliance of three to five years.

In September, China’s former securities czar, Xiao Gang, added his voice to the chorus of criticism over the end-2020 deadline, describing it as “unrealistic and unfeasible.”

As a result of the concerns, financial authorities started discussing the possibility of a three-year extension, and in September some relevant regulatory bodies agreed in principle to make the change, Caixin has learned. However, the final decision needs to be taken at a higher level and it remains uncertain if an extension will be granted and how long the grace period will be. No regulatory body has been authorized to release information regarding the extension and multiple sources in the banking industry have told Caixin that they have not received any notice of a change.

A senior regulatory official told Caixin that some banks had previously said that they could complete the compliance process on time or even earlier than the current deadline, but they have now backtracked.

One of the key problems for banks has been unwinding what’s known as non-standard debt assets, one of the most opaque corners of the shadow-banking industry. These are off-balance-sheet, illiquid long-term assets that are not traded on official exchanges, and they include loans to companies stipulated by regulators as off-limits: real estate developers and local government financing vehicles. These types of assets have been included in many of the banks’ asset management products and are mostly kept off their balance sheets.

In July 2018, the regulators issued more-detailed guidelines that clarified some of the original rules and gave managers more flexibility to deal with their investments in non-standard assets to avoid a chaotic sell-off of assets before they matured by institutions rushing to comply with the deadline. A longer grace period would allow many of these non-standard assets to mature naturally, taking pressure off the banks.

"The disposal of non-standard assets is a dynamic process, and in reality it’s difficult to carry out,” one executive with a large commercial bank told Caixin. “Now it seems that the reality is not easy to operate, and it’s difficult for the banks to move those off-balance-sheet assets back onto their balance sheets.”

Multiple industry sources said regulators are likely to roll out an extension in order to allow banks to handle the unwinding of their existing asset management products in a more orderly fashion.

The Chinese name of the new regulatory framework for the asset management industry, mentioned in the first paragraph, is: 关于规范金融机构资产管理业务的指导意见.