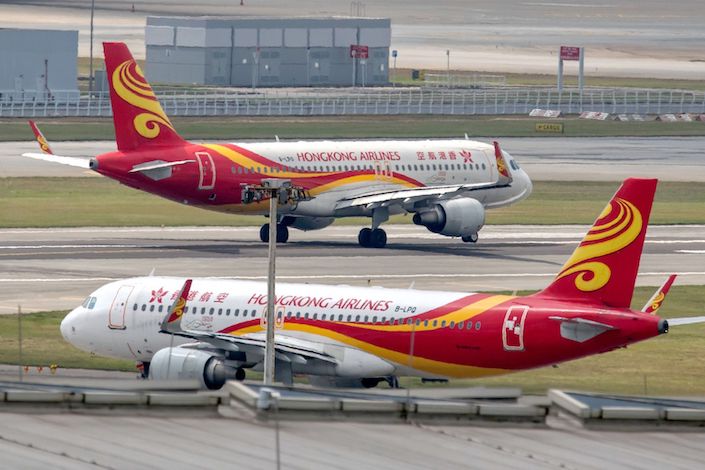 (Bloomberg) — Seven planes of embattled Hong Kong Airlines were seized by the city’s Airport Authority after the company failed to make some payments, deepening concerns about the future of a carrier that nearly lost its flying license because of financial difficulties.

The seizure was made in accordance to the Airport Authority Ordinance, the government body said in an email Tuesday, citing a section of the rules that addresses overdue charges. The statute allows the authority to sell the planes if the charges aren’t paid within 60 days of the detention.

Hong Kong Airlines, whose fleet consists of 39 Airbus SE planes, said the company’s operations remain normal, but some of its aircraft haven’t been scheduled for operation and were suspended from service under the Airport Authority’s arrangement.

The move is the latest sign that Hong Kong’s aviation sector, Asia’s busiest for international traffic, is facing its toughest year since the global financial crisis after months of protests drove away visitors and tipped the city’s economy into recession. Cathay Pacific Airways Ltd., Hong Kong’s dominant carrier, has warned it’s bracing for a significant deterioration in earnings.

“Typically, aircraft being seized is a prelude to operations being shut down” for an airline, said Paul Yong, an analyst at DBS Group Holdings Ltd. in Singapore. “Load factors are running below breakeven, so carriers are losing money on flights in and out of Hong Kong. So what’s happening at Hong Kong Airlines is not surprising.”

For closely held Hong Kong Airlines, which was struggling even before the demonstrations flared in June, the plane seizures show the carrier continues to grapple with liquidity challenges despite averting closure earlier this month.

Neither Hong Kong Airlines, which is backed by Chinese conglomerate HNA Group Co., nor the Airport Authority elaborated on the missed payments, but the South China Morning Post reported earlier that the company could owe between HK$11 million ($1.4 million) and HK$17.2 million in parking and other fees.

The airline avoided becoming the first carrier to collapse in the city in more than a decade after the Air Transport Licensing Authority, or ATLA, said Dec. 7 it wouldn’t take further action on condition that Hong Kong Airlines raise and maintain enough cash to satisfy the regulator. The authority had threatened to revoke the company’s license because of its financial difficulties.

Authorities made repeated requests for the airline to provide details on its financial situation following changes to its board of directors last year and reports of business difficulties.

The economic slowdown didn’t help, and the impact of the protests left the 13-year-old carrier ill-equipped to face an inevitable downturn that has hit peers across Asia, from Cathay to Qantas Airways Ltd. and Cebu Air Inc.

The aviation sector has been a prominent casualty during the unrest, particularly when protests sparked by a contentious extradition law spread to the airport in August and temporarily paralyzed operations there. Retail, tourism and many other industries have also taken a hit.

Hong Kong Airlines has taken various measures to ease its troubles. The company has delayed paying some of its staff and announced route cancellations, including to Vancouver and Ho Chi Minh City. It also stopped providing in-flight entertainment from the start of December. Concerned about deteriorating finances, ATLA on Dec. 2 gave the company just five days to raise more cash or risk losing its license.

Should the situation deteriorate, passengers face low odds of securing full refunds on tickets despite regulations aimed at helping consumers in the event an airline fails, according to Shukor Yusof, founder of aviation consultant Endau Analytics.

Ranked 24th out of 100 in the SkyTrax 2019 World Airline awards, Hong Kong Airlines’ jetliners have been flying as far as North America and Australia. With cheaper fares than Cathay, the carrier’s troubles have revived memories of Oasis Hong Kong Airlines, which went bust in 2008 after less than two years operating as a lower-cost, long-haul carrier.