By Guo Yingzhe and Wen Simin 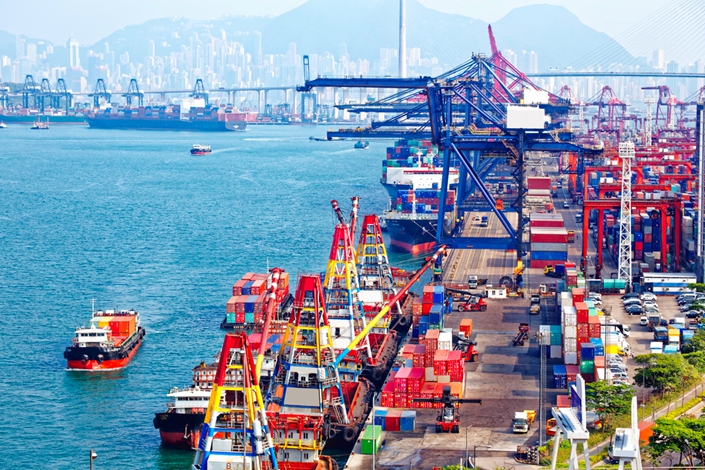 After a tough 2019, Hong Kong’s trade sector will likely experience another bad year in 2020. The region’s exports could drop 2% in 2020, hit by the slowdown in the global economy and the “proliferation of protectionism,” the Hong Kong Trade Development Council (HKTDC) estimated in a new report.

Exporters across all major industries and sectors in Hong Kong have become more pessimistic about the outlook, according to the report which was released Wednesday. The HKTDC Export Index hit a record low of 18.8 for the fourth quarter, the first time the reading has dropped below 20 since the index started in 2006, the council said. The reading was also weaker than the previous low of 22.3 in the fourth quarter of 2008 in the depths of the global financial crisis. The index gauges the near-term prospects for exports based on a survey of 500 Hong Kong traders in six main sectors. A reading below 50 indicates a downward trend and a pessimistic outlook.

“On the whole, Hong Kong exports are under unprecedented pressure, largely on account of operational disruption and the uncertainties arising from trade protectionism and geopolitical frictions,” Alice Tsang, assistant principal economist at the HKTDC, wrote in an article on the council’s website. “Overall, protectionism is seen as the biggest threat to Hong Kong’s 2020 exports, with high tariffs and lingering uncertainties set to disrupt trade and investment flows, while increasing the risk of a deep and protracted global slowdown.

“One potential bright spot, however, is that the latest Sino-US trade agreement may deliver at least short-term relief, though there is unlikely to be a complete rescindment of the punitive tariff regime any time soon.”

The HKTDC’s survey showed that 65% of Hong Kong exporters anticipate a drop in their total sales in the coming year and 58.5% said Sino-U.S. trade tensions will have a negative impact on their exports over the near term, although that’s an improvement on the 61% recorded in the previous quarter.

Read more
In Depth: Why Hong Kong Faces a Recession

Nevertheless, 2020’s expected performance will be an improvement on this year. Government data show growth in Hong Kong’s goods exports turned negative in November 2018 and, in the first 10 months of 2019, the city’s total exports fell by 5.1%, although Tsang pointed out that was “not markedly worse than that suffered by a number of the region’s other economies” such as South Korea and Japan. The HKTDC forecasts that the full year decline will be 4%.

The weak performance reflects the global downturn in trade amid sluggish demand across the world and persistent trade friction. In October, the World Trade Organization’s economists lowered their forecast for merchandise trade growth in 2019 to 1.2% in volume terms from an April estimate of 2.6% and down from 3.0% growth last year. They also cut their projection for 2020 to 2.7% from a previous 3%.

Most of Hong Kong’s exports are made up of re-exports — goods that have been imported from another customs region and then exported again in the same state. From January to October, re-exports accounted for 98.8% of total exports, data from the census and statistics department show. This type of trade has been “deeply affected by the international trade environment,” Nicholas Kwan, research director of the council, told a briefing.

Although the world’s two largest economies are set to reach a partial trade deal to deescalate the trade war, the HKTDC warned that “protectionism is likely to prevail and broaden in its application” and urged the city’s exporters to diversify their markets and production.

Trade is not the only factor hurting Hong Kong. Retailing and tourism, two pillars of the economy have slumped over the past six months amid the social unrest that’s gripped the city. The Asian financial hub slipped into a technical recession in the third quarter as its gross domestic product shrank 3.2% from the previous three months, the second straight quarterly decline.