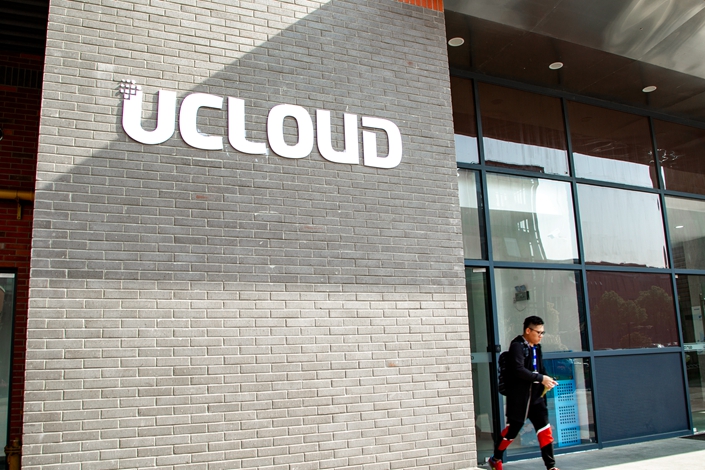 UCloud's headquarters in Shanghai on April 8.

A homegrown cloud services provider has gotten the go-ahead to list on China’s new high-tech board, which will make it the first company with a dual-class share structure to go public on the Chinese mainland if all goes to plan.

Shanghai-based UCloud Technology Co. Ltd. has been given the all clear from the China Securities Regulatory Commission (CSRC) to list on the STAR Market, the country’s new Nasdaq-style tech board, according to a CSRC statement (link in Chinese) dated Friday. UCloud and its leading underwriter will consult with the Shanghai Stock Exchange, which hosts the board, to determine when the IPO might take place.

If successful, UCloud will become the first listed company with a dual-class share structure in China’s market for A-shares, or yuan-denominated equities that trade on the mainland’s stock exchanges.

Many technology companies, including Facebook Inc. and the Chinese e-commerce giants Alibaba Group Holdings Ltd. and JD.com Inc., use shareholding structures with weighted voting rights, which enables their founders to retain control of the companies after they go public. Allowing IPOs with dual-class shares may give the Shanghai Stock Exchange a better shot at competing against its rivals in Hong Kong and New York.

China has long sought to lure high-profile Chinese technology companies to list at home, but a ban on dual-class share structures pushed many of the best-known firms, including Alibaba and Tencent Holding Ltd., to list abroad. Hong Kong Exchanges and Clearing Ltd., which operates the city’s stock exchange, reversed its ban on companies with weighted voting rights in April 2018 after years of debate and the loss of Alibaba’s $25 billion IPO to the U.S. in 2014.

In October, mainland stock buyers got their first chance to trade Hong Kong-listed shares with a dual-class share structure after smartphone-maker Xiaomi Corp. and on-demand services platform Meituan Dianping, both of which use the structure, were included in a stock connect program that makes Hong Kong-traded stocks available to traders on the mainland.

The STAR Market, whose proper name is the Science and Technology Innovation Board, opened for trading in July and has become a testing ground for reforms that aim to make domestic stock markets more attractive places to list for innovative companies in emerging industries. The board has adopted a new IPO mechanism based on a registration system rather than one that requires detailed regulatory approval for every listing. It is the only board on the mainland to allow dual-class listings.

If the IPO is fully subscribed, the three executives could end up holding a combined 23.1% of total shares, leaving them with 60.1% of the voting rights, the prospectus said.

UCloud’s revenue grew 41.4% last year to 1.2 billion yuan ($170 million), according to the prospectus. It became profitable in 2017, and last year posted a net profit of 77.1 million yuan. But its net profit in the first three quarters of 2019 plummeted 84.5% year-on-year to 10.7 million yuan, a drop that the company attributed to lowering pricing, rising costs, slowing industry growth and fierce market competition. It also warned that the decline will continue into 2020, possibly pushing the company into the red.