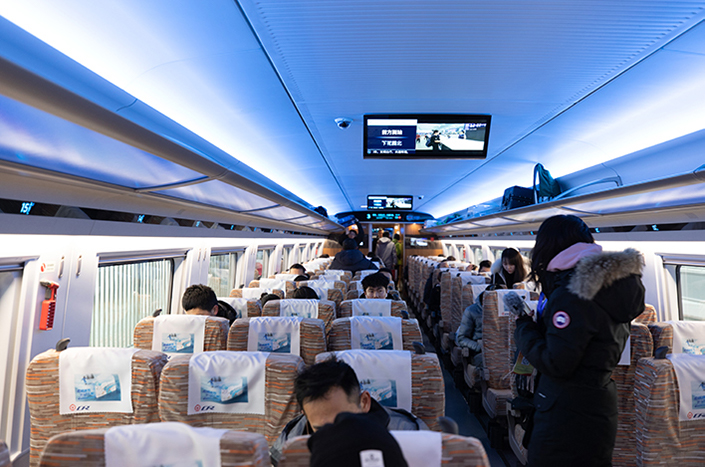 A high-speed railway that connects Beijing with a ski resort area to its northwest went into operation Monday, completing a key infrastructure link between the two cities that will co-host the 2022 Winter Olympics.

The 174-kilometer (108 miles) Beijing-Zhangjiakou line – better known as the Jing-Zhang high-speed railway — is slashing the travel time between Beijing and the Zhangjiakou Winter Olympics Village from 3 hours to just 47 minutes.

The line into Beijing-adjacent Hebei province allows for a maximum designed speed of 350 kilometers per hour. Construction began in 2013 as part of the Beijing-Baotou railway system, which connects the nation’s capital with Inner Mongolia. It was expanded with two other lines to the winter resort towns of Yanqing and Chongli in 2014, shortly after China won the right to host the 2022 Winter Olympics Games. Construction of the Jing-Zhang high speed railway began in 2016, after delays due to opposition from residents living along the proposed line.

Despite its completion well in advance of the 2022 Olympics, the line has not been without controversy. Construction of the route’s Beijing section faced strong pushback from local residents and officials in 2015, even though the government ultimately prevailed in negotiations. More than 300 families expressed their opposition to the project due to noise and environmental concerns, forcing the railway operator to suspend construction and lay out alternative plans to reach an agreement with the public.

After hosting the Summer Olympics in 2008, Beijing will be the first city to have hosted both the Summer and Winter Olympics. Previous venues for the 2008 games will be utilized again for winter events, including the Water Cube, Bird’s Nest and National Indoor Stadium. Restricted by Beijing’s gentle terrain, ski events will be held in nearby mountainous Zhangjiakou and Yanqing, where usually arid slopes will be carpeted with powdery man-made snow. Officials and businesses hope the event will provide a boost to the region’s economy, and place Beijing among the ranks of the world’s top skiing destinations.