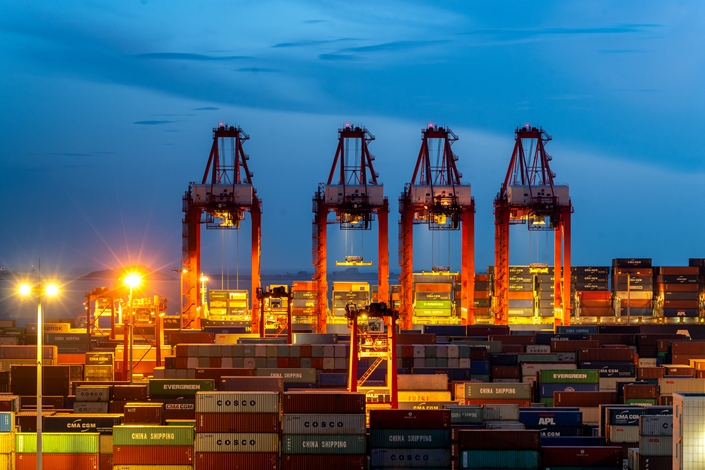 China’s trade numbers finished 2019 on a strong note as growth of both imports and exports accelerated in December amid improving manufacturing activity and positive signs in China-U.S. trade relations, a customs official said (link in Chinese) at a briefing Tuesday.

Goods exports grew 7.6% year-on-year to $237.7 billion last month, ending four straight months of contraction, data (link in Chinese) released Tuesday by the General Administration of Customs showed. The December growth rate was the highest since March and beat the median forecast of a 4% increase by a Caixin poll of economists (link in Chinese).

Imports in December jumped 16.3% from the same period in 2018 to $190.9 billion, the second consecutive monthly increase after six straight months of decline. The pace of growth also beat the Caixin median forecast of a 9% increase.

Higher domestic demand was one reason for last month’s better-than-expected import growth. An improvement in operating conditions in the manufacturing sector over the last two months has led to an increase in the imports of some raw materials and energy products, said Huang Guohua, a deputy head of the customs administration’s statistics and analysis department.

Huang also attributed the surge in trade to higher global commodity prices, rising corporate confidence due to the progress in the China-U.S. trade talks, and a low comparison base. In December 2018, the country’s imports and exports declined 7.6% and 4.4% year-on-year, respectively.

Economists from research firm Capital Economics Ltd. said the improvement in imports was “the result of higher import prices rather than stronger import volumes,” so it would be premature to conclude that there has been a marked pickup in domestic demand.

China’s imports from the U.S. rose for the second straight month, growing 7.8% year-on-year to $11.2 billion in December as China started exempting some U.S. goods from additional tariffs in line with the trade war de-escalation. “In December, imports of American soybeans and pork rose sharply,” said Zou Zhiwu, a deputy head of the customs administration.

But exports to the largest economy continued to shrink, down 14.6% year-on-year to $34.4 billion last month. Trade data (link in Chinese) for the whole of 2019 showed that the U.S. has been replaced by the Association of Southeast Asian Nations (ASEAN) as China’s second-largest trading partner. Trade with the U.S. shrank by 14.6% to $541.2 billion last year, while trade with ASEAN rose 9.2% to $641.5 billion. The European Union remained China’s largest trading partner.

China has promised to substantially expand purchases of American goods and services as part of the phase one trade deal that is slated to be signed Wednesday. Zou said he doesn’t think that increasing imports from the U.S. would mean fewer imports from other countries, because “China has a huge market and our trade is diversified.”

He also said the U.S. decision on Monday to drop China from its list of currency manipulators was the “right choice.”

Economists from Nomura International (Hong Kong) Ltd. expect “volatile monthly readings of trade growth over the next couple of months,” due to distortions from the Chinese New Year holiday, as traders may have rushed to clear customs in December ahead of the incoming holidays in January.