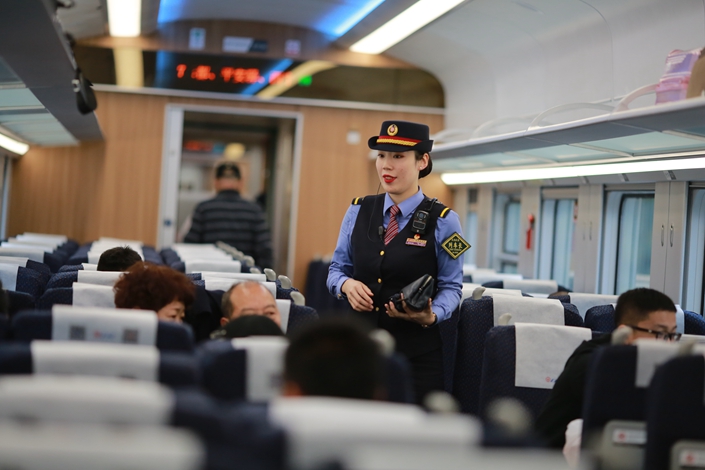 Caixin's snapshot of the operating conditions in China’s services sector fell to its lowest reading in three months in January. Photo: IC Photo

Expansion in China’s vast services sector softened for the second consecutive month in January as growth in new business and employment slowed, a Caixin-sponsored survey showed Wednesday, adding to evidence that the economy was cooling even before the outbreak of the deadly coronavirus started to impact activity.

The Caixin China General Services Business Activity Index, which gives an independent snapshot of operating conditions in the services sector, fell to 51.8 in January, the weakest reading in three months, from 52.5 the previous month. A number above 50 indicates an expansion in activity, while a figure below that points to a contraction.

The downbeat reading follows a slowdown in industrial activity seen in the Caixin Manufacturing Purchasing Managers Index (PMI) for January released on Monday, which fell to a five-month low of 51.1. China’s gross domestic product (GDP) rose 6.0% year on year in the fourth quarter of 2019, unchanged from the previous three-month period, stoking expectations that the economy had stabilized after a five-quarter deceleration.

The services sector accounted for about 53.9% of China’s GDP in 2019, government data (link in Chinese) show. Along with slowing expansion in the country’s manufacturing activity, the Caixin China Composite Output Index, which covers both manufacturing and service companies, came in at 51.9 in January, down from 52.6 in December.

"China’s economic recovery was not strong enough due to limited improvement in demand, and some companies didn’t replenish inventories,” said Zhong Zhengsheng, director of macroeconomic analysis at CEBM Group, a subsidiary of Caixin Insight Group. “As the current pneumonia epidemic is putting pressure on the economy, policymakers need to make efforts to ensure no major disruptions to improving business confidence."

The services PMI survey was carried out from Jan. 13 to Jan. 22, ahead of the beginning of the Lunar New Year holiday and before the scale of the coronavirus outbreak was publicly known and human-to-human transmission was confirmed. Since Jan. 23 the government has taken draconian measures to stop the virus spreading, including putting Wuhan, the city at the epicenter of the virus, into quarantine.

Total new business grew at a slower pace in January than the previous month, partly due to slowing domestic demand, according to the Caixin survey of roughly 400 companies in the services sector. The gauge for new export business expanded at a faster rate than December. The employment index for January remained in expansionary territory but fell for the fourth month in a row as companies’ efforts to reduce costs weighed on staff hiring, according to the survey. A measure of input costs rose at the weakest pace in 10 months and services companies cut selling prices for the second month in a row in a bid to boost new orders.

Since December, China has been grappling with the outbreak of the fast-moving new coronavirus. The death toll from the epidemic has surged, standing at 426 as of 10 a.m. Beijing time Feb. 4. There were 20,472 confirmed cases in China and 23,214 suspected cases as of Tuesday. The government has taken a raft of measures to prevent the spread of the virus, which has hit economic activity hard – notably travel, tourism, leisure and retailing. Manufacturing has also been curtailed as the government extended the Lunar New Year public holiday to Feb. 2 from Jan. 31 and companies in some regions, including Shanghai and Guangdong province, were told not to resume production until Feb. 9.

Economists expect the epidemic will have a negative impact on first-quarter GDP growth and many have already lowered their forecasts. UBS AG forecasts GDP growth could drop to 3.8% year-on-year, down from 6.9% a year earlier, according to a Feb. 3 report. Its analysts say that if the outbreak lasts well into the second quarter, GDP growth for 2020 as a whole could drop to below 5%, compared with 6.1% in 2019, which was a 29-year low.

Economists at Macquarie Securities Ltd. and Goldman Sachs Group Inc. see first-quarter GDP expansion sliding to 4% before recovering in the second half of the year. Macquarie now sees full year growth at 5.6% and Goldman Sachs lowered its full year 2020 growth to 5.5% from 5.9%, warning that a more prolonged outbreak could see the rate drop to 5% or below.

The government has started to ramp up efforts to protect its financial markets from volatility and ensure the interbank market, which oils the daily wheels of the financial system, has plenty of liquidity. The central bank normally withdraws liquidity from the interbank market to mop up the cash injections made before the Lunar New Year. But on Monday and Tuesday, the central bank added a net 550 billion yuan ($79 billion) through reverse repurchase agreements and cut interest rates on the repos by 10 basis points.

In a statement on its WeChat account, the People’s Bank of China said the cash injections showed its determination to stabilize expectations and restore market confidence.