China Gets Back to Work, but Finds Few Customers 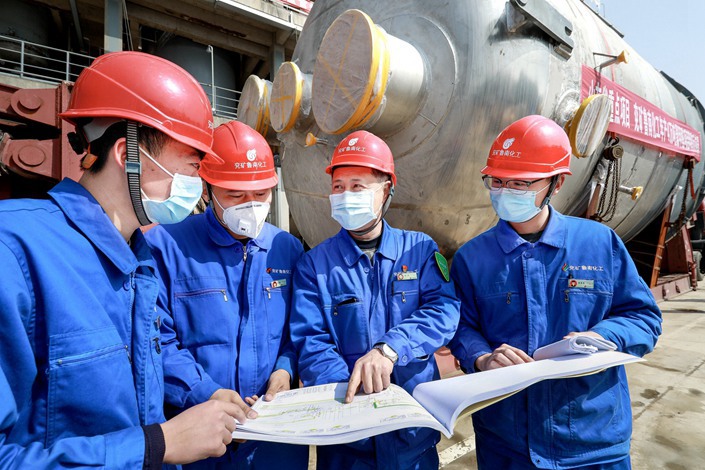 Nearly all of China’s largest companies have reopened and the majority of the country’s labor force has returned to work, the country’s industry regulator said, though they will have to contend with ongoing subdued demand as virus fears linger at home and bring other economies to a halt.

Outside of Hubei province, the epicenter of the epidemic where businesses remain closed, more than 95% of large-scale enterprises have resumed work, and 80% of workers have returned to their posts, reported Vice Minister of Industry and Information Technology Xin Guobin at a Friday press conference (link in Chinese) with the State Council.

However, small and mid-size businesses lagged behind, Xin said, with only about 60% open for business more than a month after the end of the Lunar New Year holiday, which was extended multiple times due to the epidemic.

Demand for many goods and services, already ailing at home amid quarantine measures and travel restrictions, is now beginning to suffer abroad as major sources of Covid-19 infection shift outside of China’s borders in what the World Health Organization (WHO) has deemed a global pandemic.

In February, at the height of China’s outbreak, freight volume on the country’s busiest coal railway dropped for a fourth consecutive month as the coronavirus smothered both coal output and demand. The same month, China’s smartphone shipments fell 54.7% year-on-year, while its already-flagging car sales plunged 80% from the same period in 2019 as Covid-19 disrupted supply chains and kept consumers at home.

But in recent weeks, the government has pushed to bring the economy back on track and encouraged resumption of work as new Covid-19 cases have dwindled, with few new infections being reported each day outside of Hubei. However, lack of reliable data has called claims about the work resumption rate into question.

Some localities struggling to meet back-to-work targets have resorted to feigning electricity consumption and other metrics, a Caixin investigation has found. Some companies attempting to reopen have also encountered numerous stumbling blocks including bureaucratic restrictions, labor shortages, logistics difficulties and risks of cross-infection between staff.

One of Apple Inc.’s production facilities in Southwest China's Sichuan province was operating at half of its usual capacity as recently as Thursday, while the China Association of Automobile Manufacturers said Friday that even though most production facilities are back online, automakers are still running below 40% of capacity.

Still, those that have managed to resume operations are now facing canceled orders and losing business from abroad, as Covid-19 cases in countries including Italy, Iran, South Korea, France and Spain soar into the thousands.

The pandemic has brought turmoil to global markets, with the Dow Jones Industrial Average dropping nearly 10% Thursday in the biggest sell-off since 1987. The same day, Europe’s benchmark index suffered its worst day in history and Canada’s main gauge experienced its worst day since 1940.