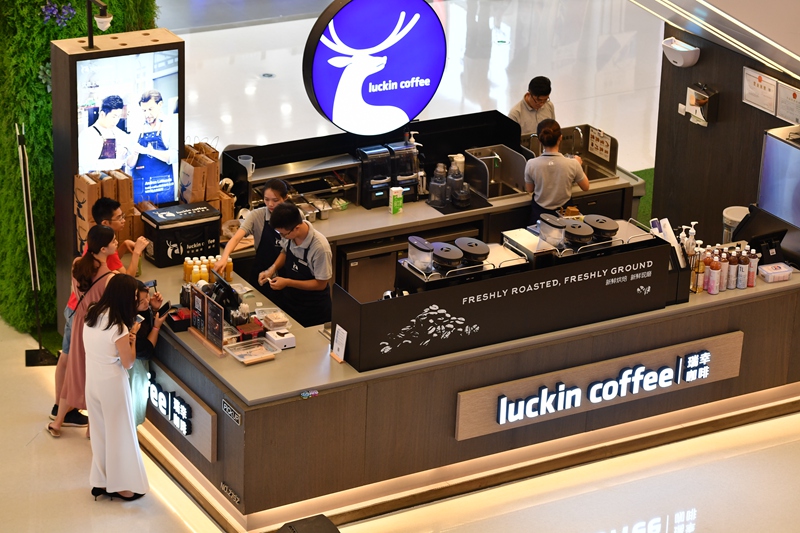 Customers pick up their orders at a Luckin store in Shanghai.

China’s upstart Luckin Coffee wowed investors with astonishing growth and an ambitious narrative that it was a successful challenger to Starbucks in the making. And then it all blew up in an unexpected way.

In 2½ years, Luckin rose from nothing to become China’s biggest coffee chain with 4,500 shops, outnumbering Starbucks in the world’s most populous country. The company debuted on Nasdaq last May with a $561 million initial public offering only 18 months after its founding. In just six months, Luckin’s market value shot up more than 20-fold to nearly $12.5 billion.

Investors were dazzled by Luckin’s lightning-fast growth and technological sheen — all transactions are made on its mobile app, and stores offer only pickup services. The company raised more than 17 billion yuan ($2.4 billion) during its less than three-year lifespan through sales of shares and bonds as well as loans from more than 190 institutional investors.

But the implosion also took place at record speed — 11 months after its public listing. On April 2, Luckin stunned the market by disclosing that nearly half the revenue it reported in the last three quarters of last year, or 2.2 billion yuan, was fake. The company blamed Chief Operating Officer Liu Jian for the misconduct and said it initiated an investigation of Liu and four other employees, according to Luckin’s filing with the U.S. Securities and Exchange Commission. Liu hasn’t commented on the allegations.

Although there has never been a lack of skeptics and short sellers who saw Luckin’s success as largely hype, the news dropped a bomb on the market and crushed Luckin’s stock, which was already under pressure from the Covid-19 pandemic.

Luckin’s shares have since tumbled 83%, wiping out more than $5 billion in market value. Investors sold 447 million Luckin shares on the open market in three days after the disclosure, equivalent to total transactions over the previous 40 days. Trading was suspended April 7 pending further disclosures.

Luckin’s troubles put its founder and Chairman Lu Zhengyao under the spotlight. Known as Charles Lu, the 50-year-old businessman from Fujian province also founded and controls Hong Kong-listed rental car specialist Car Inc. and ride-hailing service provider UCar Inc. For Lu, the U.S. market debut of Luckin was a long-sought dream that failed with his car rental business. Car Inc. gave up a U.S. listing plan in 2012 because of headwinds facing Chinese companies in the U.S. after several accounting scandals.

Luckin’s strategy focused on rapid expansion. Its cash-burning subsidies reminded many of Car Inc.’s efforts to seize market dominance after Lu founded it in 2007. Market views of Lu’s business approach have long been sharply divided. While some applauded his shrewd capital maneuvers, others said his companies often engaged in reckless expansion taking on risky heavy debt.

Personnel, resources and investors linked to Lu’s Car and UCar backed Luckin’s expansion. That startup strategy has backfired. Car Inc.’s Hong Kong-traded shares have lost more than half their value since Luckin’s fraud disclosure amid concerns the company could face its own credit crunch due to its connection to Luckin through Lu. The company’s credit rating was subsequently downgraded.

Although questions remain about the reasons for and details of the financial fraud at Luckin, the fallout has spread beyond the company and its affiliates to a broader range of U.S.-listed Chinese enterprises.

Short sellers like Wolfpack Research and Muddy Waters Research, which blew the whistle on Luckin, make money by identifying stocks that may be overvalued, sometimes because of undisclosed accounting irregularities. These organizations then borrow shares of the target company and sell them ― a practice known as “selling short” ― betting that the stock’s value will fall so they can buy shares at a lower price to replace the borrowed equities and pocket the difference.

Some Chinese executives said Luckin tainted the reputation of Chinese companies in the U.S.

“It is because of companies like Luckin that markets’ confidence in Chinese companies’ stocks has been damaged,” one executive said. “They should take legal responsibility.”

Lu refused to comment for this article. But he issued a public statement April 5 apologizing for the scandal and vowing to take responsibility. He said the company expanded too rapidly and ran into problems. Caixin contacted Luckin's media relations department for comment as well. A person from the department said its public statements are its official replies and refused to say more.

Meanwhile, Luckin stores remain open for business in China. After news of the scandal, many consumers rushed to cash in coupons that the company distributes liberally.

Luckin’s misconduct looks like déjà vu of a wave of shorting U.S.-listed Chinese companies set off by fraud scandals nearly 10 years ago, said a person from a foreign investment bank. It also reflected long-standing cracks in China-U.S. coordination of financial supervision that offer room for dodgy business practices. Without a resolution for this problem, overseas-listed Chinese companies will always be under a shadow, the person said.

China’s securities regulator harshly criticized Luckin after the fraud disclosure and pledged to assist U.S. regulators in an investigation. But Chinese regulators’ enforcement powers over Luckin will be limited because it’s registered in the Cayman Islands and traded overseas, analysts said.

It all started in late January when short seller Muddy Waters Research said it would short Luckin’s stock after it received an 89-page anonymous report accusing the company of fabricating financial figures.

The unattributed report posted on Twitter alleged that the number of items sold per Luckin store per day was inflated by at least 69% in the third quarter of 2019 and 88% in the fourth quarter, based on 11,260 hours of store video that the report’s authors said they viewed. Luckin denied all fraud allegations.

Luckin’s shares plunged as much as 26% the day the report was made public. But some investors, including short seller Citron Research, cast doubts on the report’s accuracy and methodology.

A Luckin shareholder told Caixin that the company’s board convened a meeting right after the report was posted but adjourned without taking action, citing questions about the trustworthiness of the report and difficulties in obtaining related materials.

As the fuss faded, some investors noticed that Luckin delayed the release of its annual report, the first after its listing. Caixin learned from separate sources that Luckin auditor Ernst & Young detected irregularities when it reviewed the company’s 2019 financial statements.

Two people close to Luckin’s board told Caixin that Ernst & Young reported “suspicious transactions” to the board in mid-March and demanded related financial records from top management, including Lu. Later, the auditor concluded that there were more than 2 billion yuan of inflated revenues. Luckin set up a special committee to investigate.

The fraud allegation raised by Muddy Waters was partly proved, although the method of fraud was different, according to the two sources.

In its April 2 statement, Lucking blamed COO Liu for the misconduct. One person said Liu was suspended to assist the internal investigation.

“The result of the internal probe will come soon,” the person said.

Liu was named Luckin’s COO in May 2018 and is little known to the public. He became a board member in February 2019. Before joining Luckin, he was a veteran manager at Lu’s Car Inc. and UCar Inc., according to Luckin’s IPO prospectus.

Another person close to the board said Luckin will report its internal probe results to the U.S. securities regulator and may face massive class action lawsuits.

“Someone will go to jail,” the source said.

Despite becoming a darling to investors, Luckin has long been a target of short sellers who bet its business model would fail. One short seller told Caixin that Luckin boosted its valuation with the rapid addition of stores rather than profitability. That means the company relies on cash to support expansion and may collapse suddenly if the capital chain breaks, the investor said.

Also troubling was Luckin’s heavy spending to attract customers with free coffee and deep markdowns. In 2018, Luckin charged an average of 9.1 yuan ($1.30) per cup of coffee, losing money on every cup it sold. A cup of Starbucks coffee sold for around 30 yuan.

But Luckin executives are good at managing investor expectations, said a manager at a Beijing-based hedge fund. During the IPO roadshow, Lu convinced many investors that Luckin would someday become a combination of Starbucks, Costco and Amazon.

Short sellers who bet on Luckin’s collapse were repeatedly disappointed as Luckin always reassured investors and pushed up its share price.

On Jan. 10, Luckin sold 12 million American depository shares (ADSs) in a secondary offering, attracting more investors. Capital Research Global Investors and Melvin Capital both significantly increased their holdings in the first quarter, while Lone Pine Capital sold out its stake by April 2, according to market records.

A Joy Capital spokesperson told Caixin the company will use legal measures to protect its interests. Joy Capital, which took part in both A and B financing rounds for Luckin in 2018 before it went public, didn't sell any of its holdings and is exposed to huge losses, the spokesperson said.

Centurium Capital condemned the fraud in a public statement. The company sold 25% of its Luckin holdings for $232 million before the scandal.

Co-founders Lu and Qian Zhiya, or Jenny Qian, also cashed out part of their holdings through stock pledges. According to a Goldman Sachs statement April 6, Lu, Qian and Lu’s sister Sunying Wong pledged a total of 515 million class B shares and 95.4 million class A shares of Luckin to secure a $518 million loan from several lenders. The lenders took actions to sell the shares after the loan was defaulted. Caixin was unable to reach Qian and Wong for comment.

If all the shares pledged were sold, Lu’s voting interest in Luckin would not decrease, but Qian’s beneficial and voting interests would drop significantly, according to Goldman Sachs, without specifying the size of the reduction. Lu and Qian along with their families held 75% of Luckin’s voting power as of January.

Sources close to Luckin’s board said the company has at least 9 billion yuan of cash in its accounts that was put under protection by the special committee after the scandal was exposed. The money will be used for compensation if lawsuits are triggered, a source said.

People told Caixin they are puzzled by Luckin’s fraud as the company seemingly has ample money.

“Despite the cash-burning strategy, it will make money sooner or later,” a person close to the company said. Why should it fabricate revenues now? this person asked.

The Luckin crisis swiftly sent shockwaves through other segments of Lu’s businesses empire as investors grew concerned about the links with Luckin.

On April 17, Lu’s limousine service UCar said in a statement that it faces pressure from financial institutions and suppliers demanding payment after the Luckin scandal. The company said it is discussing solutions with different parties.

Earlier, UCar negotiated a delay in the payment of money it owes Beiqi Foton for purchasing 67% of the defunct German automotive brand Borgward. UCar agreed to the 4 billion yuan acquisition last year, with plans to build it into a manufacturing plank for its auto empire.

On April 9, UCar said it would sell part of its stake in Car Inc. to raise money for debt repayment. Then on April 16, UCar confirmed that the shares will be sold to Car Inc.’s long-time shareholder Warburg Pincus, making the private equity firm the largest shareholder with a 27.22% stake.