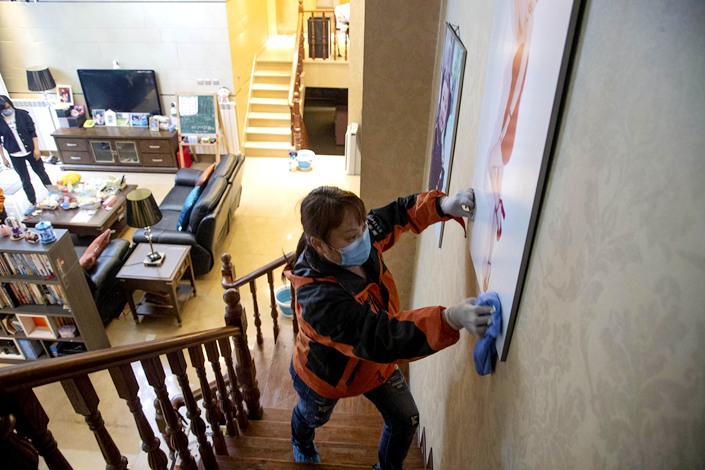 On March 25, in Chengdu, Sichuan province, a housekeeper cleans a client's home.

China’s services activity contracted for the third month in a row in April due to weakening demand both at home and overseas amid the coronavirus pandemic, a Caixin-sponsored survey showed Thursday.

The Caixin China General Services Business Activity Index, also known as the Caixin China services PMI, which gives an independent snapshot of operating conditions in the services sector, rose to 44.4 last month from 43 in March. A number above 50 indicates an expansion in activity, while a figure below that points to a contraction. In February, the reading fell to a record low of 26.5 as the Chinese economy stalled amid the Covid-19 outbreak.

Although the domestic economy started to recover in March as the virus was brought under control, the rapid spread of the disease across the globe disrupted international business and cratered global consumption, inflicting another blow to Chinese companies. As of Wednesday afternoon Beijing time, the coronavirus has infected more than 3.6 million people across the world, according to data compiled by Johns Hopkins University. The total death toll globally was higher than 257,000.

The services PMI’s April reading followed a contraction in the Caixin manufacturing PMI for the same month. The Caixin China Composite Output Index, which covers both manufacturing and service companies, came in at 47.6 in April, up from 46.7 in March, the survey showed Thursday.

“In April, the severe export shock on China’s economy had a knock-on impact on household income and consumption, as well as business investment,” said Zhong Zhengsheng, director of macroeconomic analysis at CEBM Group Ltd., a subsidiary of Caixin Insight Group.

“As the recovery of domestic consumption was limited and increased infrastructure spending was not enough to offset the plunge in external demand, the country’s economy continued to decline year-on-year,” he said.

Original data in the services PMI survey of around 400 companies in the sector were collected from April 7 to April 22. Total new orders received by service providers contracted for the third month in a row, though the rate of decline continued easing from the fastest rate on record in February. New export business also contracted for the third consecutive month in April, with the rate of contraction accelerating from March as external demand plummeted.

The sustained decline in total new work caused a further drop in employment across the services sector, setting a record for the steepest rate of job losses last month. The decline in new business also triggered a further slide in outstanding orders among service providers in April, despite the reduction in staff.

Prices charged by service companies declined for the fifth consecutive month as part of efforts to attract new orders, though input prices across the sector continued to rise in April.

However, the gauge for service companies’ business expectations, which indicates how optimistic or pessimistic they are about the business outlook for the coming 12 months, rose further to a three-month high after the reading hit a record low in February. Companies hope to see a recovery in business conditions once the pandemic situation improves, the survey said.

To cushion the impact of the pandemic, the Politburo, the Communist Party’s top decision-making body, pledged at its April 17 meeting (link in Chinese) to use stronger macroeconomic policy tools, including implementing a more proactive fiscal policy and a more flexible monetary policy.

“We expect a macroeconomic stimulus package to launch soon, providing aid for businesses, safeguarding employment and boosting investment and consumption,” Zhong said in reference to the meeting.

China’s main economic policies and plans for this year, including the GDP growth and budget deficit targets, will be approved at the annual meeting of the National People’s Congress, the country’s top legislature. The annual meeting will start May 22 in Beijing after being postponed due to the Covid-19 outbreak.