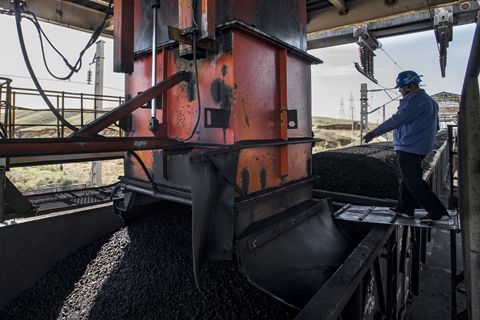 With shrinking domestic coal production capacity following supply-side restructuring, China’s Northeast is likely to experience the most severe shortfall in coal supply for the winter heating season since 2016.

Zhang Feilong, a coal analyst with YiMei Net, told Caixin that the region — comprising the provinces of Heilongjiang, Jilin and Liaoning — could face a 30 million ton shortage of the combustible black rock through next year’s spring.

If the estimate is close to reality, it would mean the biggest supply gap since the country kicked off a supply-side overhaul that called for consolidation of outdated coal production capacity in 2016.

China’s top leaders are set to meet Oct. 26–29 to draft economic and social policies for the next five years, the official Xinhua News Agency reported Monday.

The Politburo, the ruling Communist Party’s top decision-making body, Monday set the schedule for the fifth plenary session of the Communist Party’s 19th Central Committee, a key meeting to outline the country’s next-step development plans, according to Xinhua.

The meeting will map out China’s development plans for 2021–25, covering almost every aspect of the country’s economic and social issues. The meeting will also draw up a long-term blueprint running through 2035, Xinhua said.

"China’s leaders are currently putting the finishing touches on the country’s 14th Five-Year Plan, which will cover the 2021-25 period," writes Andrew Sheng, a distinguished fellow of the Asia Global Institute at the University of Hong Kong, in an article. "But one aspect of the plan — the so-called dual-circulation strategy — is already attracting the world’s attention. Many fear that China is 'turning inward' just when the global economy is staring down the barrel of a recession. These fears are misplaced."

"China’s dual-circulation strategy is a pragmatic response to the rapidly changing internal and external pressures the country faces," Sheng writes. "Policymakers’ goal is to boost supply-chain and market resiliency by leveraging China’s massive population of 1.4 billion – including 400 million middle-class consumers."

One of China’s foremost energy experts urged the country to place market forces at the center of its transition to clean power as part of efforts to slash carbon emissions to net zero by 2060.

To meet that target, the world’s largest coal consumer must wean its renewables sector off government support over the next five years, said Yuan Jiahai, a professor at North China Power University.

“Every system and every policy in our power sector … must revolve around the bigger picture of marketization,” he said Monday at the China Blue Sky Observers Forum, an annual environmental conference.

Average Chinese like Trump a bit more than Beijing elites do, which isn’t much, survey shows

U.S. President Donald Trump’s favorability ratings in China differed between Beijing-based elites and the general public, with only a single-digit share of the elites holding favorable views of the U.S. president compared with nearly one-fifth of the general public, according to a survey released Friday.

The survey on the Chinese public’s perceptions of the U.S., conducted by the Institute of International and Strategic Studies at Peking University from June to July 2019 and released Friday, found that 5% of expert respondents ― consisting of Beijing-based experts in Communist Party and governmental agencies, academies and enterprises ― held a favorable view of Trump. In contrast, 17% of more than 3,000 respondents from 40 cities across China including Beijing, Shanghai, Guangzhou and Shenzhen, approved of the American president.

After $1.7 billion fraud, Kangde Xin on cusp of delisting

“Baidu insists on zero tolerance against all violations of laws and regulations,” the company said in a statement to Caixin.

Sina Corp. agreed to go private after an entity led by its chairman, Charles Chao, boosted its offer for the Chinese social media company to $43.30 a share in cash.

The Beijing-based company said the offer implied an equity value for the company of $2.59 billion and represented a 7.7% premium over its closing price Sept. 25. It’s also an increase from an original buyout proposal New Wave Holdings Ltd. made in July at $41 a share.

Chinese companies that once pursued the recognition and liquidity of listing their shares in the U.S. have shown an increasing inclination to turn instead to their home markets. Qihoo 360 Technology Co. delisted from the New York Stock Exchange in July 2016 and then sold shares in Shanghai in 2018 as 360 Security Technology Inc.

Profits of Weibo soar even as revenue falls

A federal judge in Washington said he blocked the Trump administration’s proposed ban on the popular Chinese-owned TikTok app Sunday because the U.S. government most likely overstepped its authority.

In a brief statement on the deal, Trip.com said it hopes its acquisition of the company, which operates the occard.com.cn website, will help to stimulate demand by boosting convenience for consumers during the current dramatic travel slowdown. No terms for the purchase were disclosed.

The Shanghai-based license holder, whose Chinese name is Dongfang Huirong (东方汇融), was founded in 2011 and received its payment license a year later. At the time, China’s central bank had just begun experimenting with such licenses in a bid to liberalize the country’s financial services system.