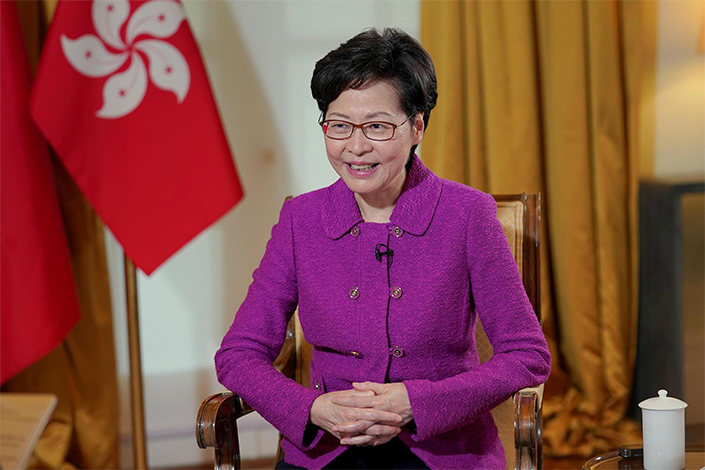 What can the world’s second-highest paid politician do if they’re locked out of the banking system?

Hong Kong Chief Executive Carrie Lam said in an interview with a local TV channel aired on Friday that she has to keep “piles of cash” at home.

“Sitting in front of you is a chief executive of the Hong Kong SAR (special administrative region) who has no banking services made available to her,” she said. “I’m using cash every day, for all the things.”

The U.S. slapped sanctions on Lam along with several other Chinese officials in August, following Beijing’s imposition of a sweeping national security law on Hong Kong. The sanctioned officials include Luo Huining, director of the Chinese central government’s liaison office in Hong Kong, and Xia Baolong, director of the State Council’s Hong Kong and Macao Office.

In October, a 60-day countdown began for U.S. officials to identify banks that do business with those on the sanction list. That means financial institutions serving the officials on the list are at risk of being sanctioned themselves. Banks, including major Chinese mainland lenders, have taken action to comply with the U.S. law, Bloomberg reported.

Although the U.S.’ unilateral sanctions bill is not directly binding for the Society for Worldwide Interbank Financial Telecommunication (SWIFT), a global financial messaging system dominated by the U.S., the cooperative may end up suspending financial services for sanctioned institutions to avoid potential severe penalties for violating U.S. law, legal specialists wrote in a Caixin commentary in July. “Thus, legally speaking, there is a real risk that some Chinese financial institutions could be excluded from SWIFT,” they wrote.

Lam said that she has piles of cash at home as “the government is paying me cash for my salary because I don’t have a bank account.”

“It’s very honorable in this set of circumstances to be so unjustifiably sanctioned by the U.S. government. It’s an honor,” Lam said.

In June, China’s top legislature passed and enacted the national security law for Hong Kong, which had been embroiled in about a year of social unrest. The legislation aims to prevent, curb and punish acts of secession, subversion of state power, terrorist activities and colluding with foreign or external forces to endanger national security.

In a video address to a U.N. Human Rights Council meeting in June, Lam continued to defend the enactment of the national security law, saying that “legislation to safeguard national security is now urgently needed” due to “escalating violence fanned by external forces.”

Han Wei and Lu Zhenhua contributed to this report.