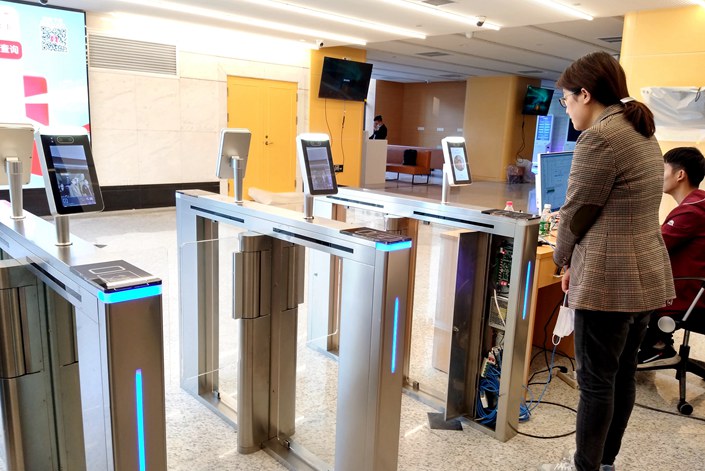 A facial recognition system is installed at the entrance of a government office in Shanghai on Nov. 12.

Beijing’s relationship with Washington looks set to worsen further, as the Trump administration sanctions more Chinese companies for their military ties. And at home, there’s even more on the government’s plate: Lawmakers are trying to balance different interest groups’ demands for the upcoming personal privacy protection law, regulators are mulling how to supervise “too big to fail” banks, and state firms are confronting increasing financing difficulties amid a new wave of debt defaults.

The outgoing Trump administration is ratcheting up its campaign to curb China’s tech aspirations by preparing a list of companies from both China and Russia that it considers military end users. This week, another U.S. company has denied selling to the Chinese military.

Washington on Thursday added four more Chinese companies, including an oil giant and a leading high-tech chipmaker, to a list of firms with military ties.

In addition, the U.S. has added a Chinese state-owned company to a growing blacklist of Chinese firms banned from buying American products, citing its ties to the Venezuelan government that has been at loggerheads with Washington for years.

China’s lax privacy rules have allowed new business models backed by emerging technologies such as facial recognition to thrive, but lack of regulation has also raised public concerns over misuse of private information, prompting lawmakers to develop a unified law in this regard. In this week’s cover story, we looked at different groups’ views on how to best strike a balance between privacy protection, business growth and the public interest.

Regulators have once again condemned internet giants for violating personal information protection rules, going so far as to name and shame Tencent and Sina for repeated breaches.

The future of money

Beijing dislikes Facebook’s Libra cryptocurrency and is making more efforts to test out its own digital currency. In the future, people could be able to send and receive the digital yuan by bumping each other’s phones together, even if they are not connected to the internet.

China is beefing up regulation for the banking sector to catch up with international standards, issuing guidelines defining systemically important banks, which will face stricter regulatory requirements.

China Defines Banks That Are ‘Too Big To Fall’

Meanwhile, China’s probe into secretive tycoon Xiao Jianhua’s Baoshang Bank is spreading to its senior management. Previously, a number of regulatory officials had been placed under investigation for wrongdoing behind the lender’s collapse.

Chinese companies, particularly state-owned ones, are finding it harder to get financing as investors worry about rising default risks. Last month, a AAA-rated state-owned coal miner’s bond default sent shockwaves through the whole bond market, resulting in cancellation or suspension of $15 billion worth of bond issuances, almost triple the October figure.