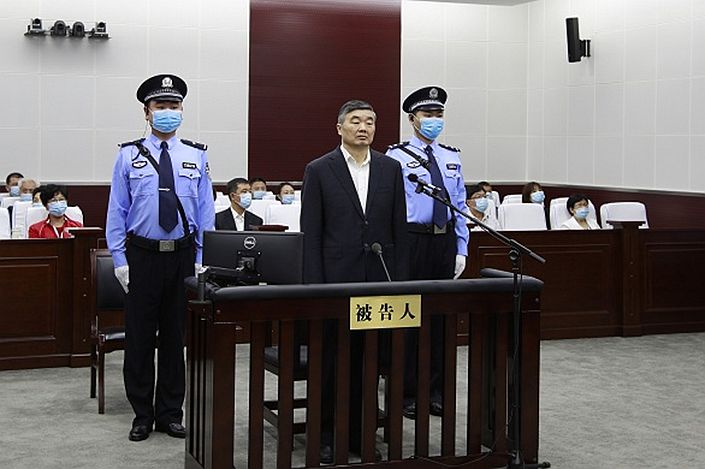 A former chairman of China’s biggest policy bank was sentenced Thursday to life in prison for taking bribes, marking the end of the trial of another financial big shot who fell to the country’s years-long anti-corruption campaign.

Hu Huaibang, a former boss of the China Development Bank (CDB), was convicted of taking 85.5 million yuan ($13.2 million) of bribes from 2009 to 2019 in exchange for using his power to facilitate financing, business operations and promotions for others, according to a court statement (link in Chinese).

The punishment also included deprivation of political rights for life and confiscation of all personal property. Hu accepted the sentence, according to the statement.

In recent years, China’s sweeping campaign to stamp out corruption in financial regulatory agencies and companies has resulted in numerous senior officials and tycoons falling from their lofty positions, including Hu. Another is Lai Xiaomin, a former chairman of one of China’s four largest state-owned bad-debt managers who was sentenced to death for bribery on Tuesday.

Hu, 65, retired from his position as CDB chair in September 2018 after working there for over five years. In July 2019, he was placed under investigation by China’s top anti-graft body. In early 2020, the country’s top prosecutor issued an arrest warrant for him.

Hu helped CEFC during the energy giant’s years-long credit-driven expansion, which saw the previously little-known firm amass a wealth of assets worldwide, including in Europe, Asia, Africa and the Middle East. CEFC founder Ye Jianming, one of China’s most mysterious tycoons, has been under investigation since early 2018.

The CDB’s loans to embattled aviation titan HNA have also raised eyebrows, as they surged during Hu’s tenure, reaching around 80 billion yuan at the end of 2018, a CDB source said.

Hu resorted to tactics that included removing, transferring or simply overruling underlings who opposed his efforts to funnel huge amounts of loans to the two companies, both of which later became targets of a regulatory crackdown on risky business.

Both CEFC and HNA are among a group of high-profile Chinese giants that accumulated billions of dollars in assets both at home and abroad in recent years. Many of them have been forced to sell off assets, as Beijing warned in mid-2017 of financial risks posed by their massive piles of debt.

The CDB is China’s largest policy lender by assets, followed by the Agricultural Development Bank of China and the Export-Import Bank of China. All the three state-owned banks were set up by China’s central government to fund projects that may not be highly profitable but are crucial to social and economic development, including infrastructure, energy and agriculture initiatives.