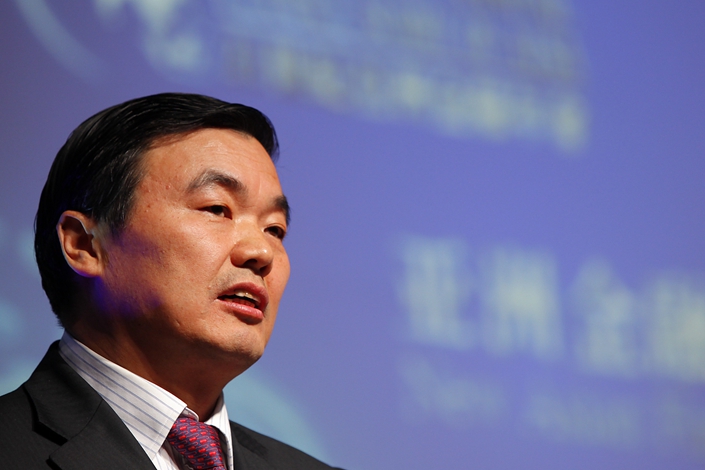 A former chairman of policy lender China Development Bank (CDB) linked to a secretive business tycoon is now under investigation, in the latest case of China’s years-long campaign against corruption in the financial sector.

Hu Huaibang, who retired as CDB chairman in September, has been placed under investigation for alleged “serious violations of (Communist Party) discipline and law” — a euphemism for corruption, the Central Commission for Discipline Inspection, the party’s top anti-graft agency, said in a statement Wednesday (link in Chinese).

China’s sweeping campaign to clean up corruption at regulatory agencies and companies has resulted in numerous senior officials and tycoons falling from their lofty positions, including Ye Jianming, founder of privately owned energy and financial conglomerate CEFC China Energy Co. Ltd. The 42-year-old tycoon was put under investigation by the authorities in early 2018.

Hu, 63, had allegedly helped Ye during CEFC’s years-long credit-driven expansion, Caixin has learned, during which the conglomerate amassed assets in Europe, the Middle East, Central Asia and Africa.

Prosecutors said that during his five years as CDB chairman, Hu helped a CEFC subsidiary obtain a $4.8 billion credit line from the policy bank at Wang’s request, according to the CCTV report. Previously chairman of Hong Kong- and Shanghai-listed Bank of Communications Co. Ltd., one of China’s “Big Five” state-owned commercial lenders, Hu allegedly provided help for CEFC Shanghai International Group Ltd., CEFC’s main business subsidiary, when it bought a stake in small lender Bank of Hainan Co. Ltd. He allegedly did so at Wang’s instruction as well.

CDB’s lending to CEFC was the result of collusion by people inside and outside the policy bank, rather than a case of unilateral fraud by the company, a source close to CDB told Caixin.

CDB was a crucial creditor to CEFC. As of September 2017, the bank had granted 42.1 billion yuan ($6.1 billion) of credit lines to CEFC Shanghai, which accounted for 68.3% of the total bank credit the company had obtained, according to a bond prospectus it released in early 2018.

In a 2017 interview with Caixin, Ye said CDB’s support distinguished CEFC from other privately owned companies, underscoring that the company’s goal was “to serve the state’s strategy.” However, CDB’s relationship with the conglomerate has exposed it to heightened risks as CEFC has been dealing with a debt crisis in the wake of Ye’s downfall.

Hu and Wang have long been acquaintances, sources with knowledge of the matter told Caixin. When Hu was at Bank of Communications, Wang Chang, Wang Sanyun’s son, worked as a secretary to Hu for more than one year; and after Hu took a position at CDB, the young Wang got a job at the policy lender’s Shanghai branch, the sources said.

Earlier this month, Zhong Xiaolong, a former deputy chief of CDB’s provincial branch in Northeast China’s Jilin province, committed suicide, Caixin previously revealed. The incident came amid an ongoing internal investigation that exposed losses of more than 3 billion yuan at the branch tied to illegal loan guarantees it had made.

“CDB has never seen such a serious illegal guarantee case, but during Hu Huaibang’s tenure, the head office didn’t have any criticism, not to mention internal notification,” a source with knowledge of the matter told Caixin. “It wasn’t until the head office changed its leader that the investigation began.”

In September, Zhao Huan, former president of Agricultural Bank of China Ltd., another of the Big Five lenders, replaced Hu as CDB chief.