In Depth: As Biden Rolls Back Trump Legacy, Chinese Firms Remain Shut Out

By He Shujing, Du Zhihang and Flynn Murphy 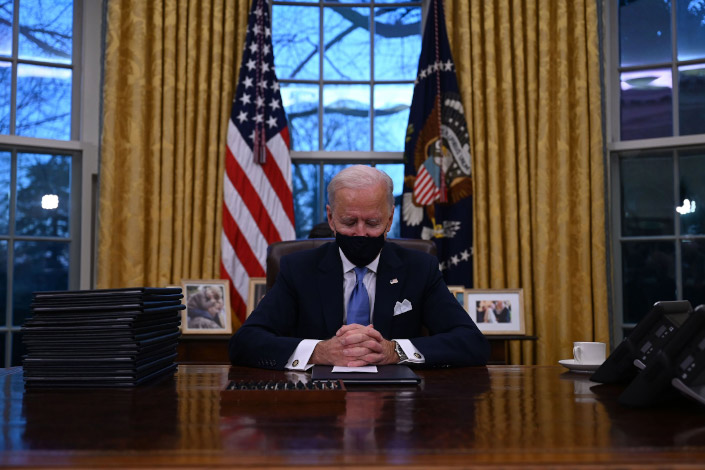 U.S. President Joe Biden has marked his first week in the White House by signing a flurry of executive orders to cement his agenda and roll back the legacy of Donald Trump.

On his first day in office, Biden signed 10 decrees about the pandemic alone — the most pressing issue facing his nation as it contends with a virus that has killed more than one in 800 Americans.

The previous administration’s “Muslim ban” which blocked inbound travel from a number of Muslim-majority countries was scotched, and the U.S. rejoined the World Health Organization after Trump sensationally quit, charging the body had been too “China-centric” in its response to the pandemic. Landmark environmental measures were also among the other orders.

But the new administration has continued to hold its cards close to its chest on the suite of restrictions Trump imposed on Chinese firms with a ferocity that only intensified after he was voted out of office in November. The outgoing leader banned Americans from investing in and trading with Chinese companies, and sought to pull their stocks from local bourses.

There were mixed signals Wednesday when the U.S. Treasury Department’s Office of Foreign Assets Control (OFAC) announced it would extend a Trump-mandated wind-down period for transactions with 44 Chinese firms on a U.S. Defense Department blacklist to May 27, from Jan. 11. But the full investment ban that former President Trump set to take effect Nov. 11 remains intact.

The announcement came after China’s three biggest telecommunications firms said they requested a review of the New York Stock Exchange’s decision to delist their shares more than a week ago, a move triggered by Trump executive order.

China Mobile, China Unicom, and China Telecom filed written requests with the exchange earlier this month, asking for trading suspensions to be stayed while the review is undertaken.

The White House and Treasury Department have so far declined to comment on the three companies’ requests, which were announced Jan. 20, the day President Joe Biden took office.

Treasury Secretary Janet Yellen has indicated a continuation of the Trump administration’s tough stance on China, but says the new team will turn to allies for help addressing problems.

The Biden administration will consult its allies before taking any steps to work toward rebalancing the U.S. relationship with China, she said.

Steven Weber, a political science professor at the University of California, Berkeley, said how Biden would proceed remained to be seen, but suggested clues about his approach could be found in the Trump administration’s missteps.

“I think they know that simply blacklisting a broad range of Chinese technology companies might feel good to some people in the short run, but isn’t a viable long-term strategy, and could come back to haunt the U.S. economy and U.S. security interests by forcing China onto a higher level of technological autonomy, different standards, and so on,” Weber said.

Weber said a “more nuanced policy” was likely from the administration, including a “managed form of interdependence,” where some companies do remain banned in both places. For instance, there’s no sign of Facebook being permitted to operate in the Chinese market anytime soon, nor Huawei in U.S. 5G networks, Weber said, but he expected “many more” companies, including chipmakers, to be allowed.

During his time in office, and increasingly in his final days and months, Trump used a patchwork of administrative measures to squeeze China’s science and technology sector — in sum, three different blacklists, two old and one new, working alongside presidential orders.

The list of companies targeted range from household names like Huawei and publicly listed Xiaomi Corp. to relatively obscure state-owned enterprises in the energy, aerospace, transport and telecom sectors, and everything in between.

The oldest blacklist is the “entity list,” first published in 1997, and maintained by the Bureau of Industry and Security (BIS) within the U.S. Department of Commerce as part of its Export Administration Regulations. The list includes not just companies but individuals, government organizations, and more, which the department considers threatening to U.S. national security or foreign policy interests.

The entity list became notorious in Chinese policy circles after the Trump administration used it to restrict trade with Huawei in May 2019, which had a disastrous impact on the company by cutting off its supply of advanced microchips.

Huawei’s decline has accelerated and new data released Thursday showed its smartphone sales tumbled by nearly half in last year’s fourth quarter, as it continued to yield market share to Apple and Xiaomi. That came despite the wider smartphone market expanding for the first time in a year.

Generally speaking, being added to the Commerce Department’s entity list bans U.S. companies from trading with the entity without first obtaining a license from the U.S. government.

The Commerce Department gained a second blacklist last year — the Military End User List (MEU) — which BIS established under the same export regulations on Dec. 23, adding 100 Chinese and Russian entities as part of the first tranche. The list can be traced back to 2007, when the U.S. Department of Commerce issued export controls specifically for China and implemented a licensing system restricting products that could “promote China’s military modernization.”

The list mainly restricts the export, re-export and transfer of American products and technologies to the listed companies. A total of 59 Chinese companies have been included in the MEU list, including aerospace firms like SAIC and XAC.

The third blacklist is the list of alleged “Communist Chinese military companies” maintained by the U.S. Department of Defense under the National Defense Authorization Act, an annual U.S. defense appropriations bill. Specifically, the 1999 version passed by the Clinton administration added a requirement that the Department of Defense maintain a list of “Communist Chinese military companies” operating in the United States.

The list was supposed to be published annually, according to a November legal note from Arent Fox LLP, but the department ignored the requirement until last year after a bipartisan push to trigger the provision.

Even so, the Defense Department list did not have teeth until it was backed by a presidential decree of Nov. 12, which banned Americans from trading shares in a company from 60 days after it was placed on the list. It also prohibits the company’s securities from being traded on U.S. bourses after 365 days.

China’s answer to Apple, the publicly listed electronics-maker Xiaomi Corp. was among nine firms added to the Defense Department list this month in a surprise decision that sent its stock in Hong Kong down 10%.

But unlike with its rival Huawei, the Trump administration held off adding Xiaomi to the Commerce Department’s entity list, which analysts said would have hit it far harder by banning Americans from trading with it and exporting it vital technologies such as high-tech microprocessors. Xiaomi denied any military connection in a statement to the Hong Kong bourse.

Perhaps demonstrating the strategic significance of China’s chip industry, or U.S. concerns about Chinese military advancement, SMIC was unfortunate enough to wind up on all three lists over the past six months. SMIC has repeatedly denied U.S. claims it has military links.

In addition to the three lists, there were outright executive orders that named specific companies — such as the twin presidential decrees effectively banning TikTok and WeChat from the U.S.