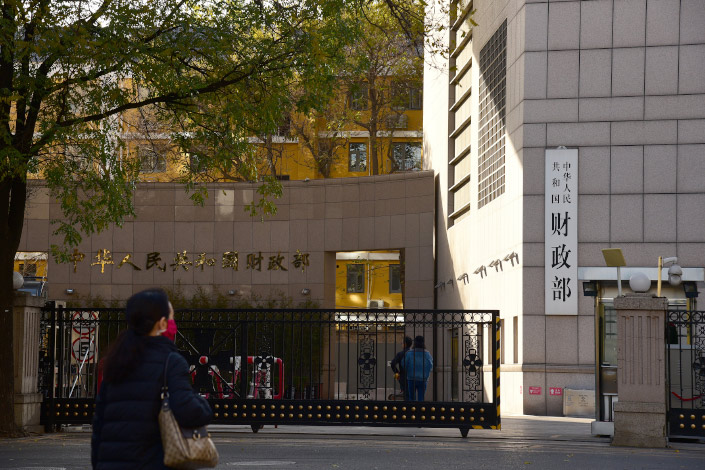 The Ministry of Finance’s headquarters in Beijing in November 2018.

China’s official government debt as a proportion of GDP surged 19% last year as the authorities authorized billions of yuan of spending to help the economy recover from the impact of the Covid-19 pandemic and extended tax and fee cuts.

Even so, the ratio is still lower than the “international warning line of 60%,” the ministry said, a reference to the limit on government debt set by the EU in its Maastricht Treaty in 1992.

China opened the debt taps last year and downgraded its campaign to rein in borrowings as the government’s priority shifted to supporting the economy and helping it recover from the battering caused by the coronavirus outbreak. “Raising government debt level is a special measure for a special time,” Cong Liang, secretary general of the National Development and Reform Commission, said at a briefing in May.

The economy’s strong rebound from an unprecedented year-on-year contraction of 6.8% in the first quarter of 2020 to a fourth-quarter expansion of 6.5% and a full-year growth rate of 2.3% is now allowing the government to refocus on controlling debt. The annual Central Economic Work Conference (CEWC) in December, where top officials and policymakers meet to draft priorities for the coming year, decided that the country’s overall debt-to-GDP ratio should be kept “largely stable” in 2021.

But the ministry warned that “some industries are still digesting the negative impact brought by the pandemic, and the foundation for a stable economic recovery is not yet solid.”

Risks from the accumulation of debt are rising as local governments face pressure on revenues and their ability to repay their debts. Central government policies to cut taxes and fees, weaker profitability of tax-paying companies, and lower growth in income from land sales are eating into the fiscal revenue of many local authorities at the same time as pressure is growing to step up infrastructure and welfare spending and help bail out local state-owned enterprises and banks.

The ministry has yet to disclose the 2020 figure for local government debt as a proportion of “comprehensive financial resources” –– which comprises mainly on-budget local fiscal revenue, tax refunds, transfer payments from the central government, land sales and some off-budget revenue. But Xue Xiaoqian, deputy director of the ministry’s China Government Debt Center, said in December that the ratio could be approaching 100%, which he described as the lower limit of a warning range. The ratio was 82.9% at the end of 2019, official data showed.

The finance ministry also disclosed that the country’s fiscal revenue fell 3.9% in 2020 from the previous year, while spending rose 2.8%. Income suffered as the government rolled out a slew of policies to cut fees and taxes, adding to the reductions introduced in 2019. Last year’s cuts were expected to reduce the burden on companies by more than 2.5 trillion yuan, it said, adding that the policies will be “further improved” this year.

The ministry reiterated the decision made at the CEWC to strike a balance between the need to support economic growth on the one hand and keep the country’s overall debt ratio stable, and said it would control risks on the other.

Local governments were allowed to sell 3.75 trillion yuan of special-purpose bonds last year, a 74% increase on the 2.15 trillion yuan allocated in 2019. The ministry didn’t provide a figure for this year, but said it will “reasonably determine the size of government bonds to maintain an appropriate magnitude of spending.”