Sinovac Applies for Conditional Approval of Covid-19 Vaccine in China 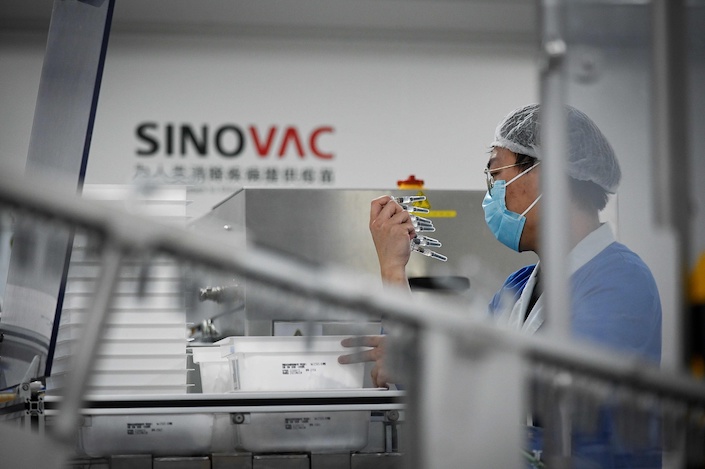 The CoronaVac inoculation developed by Sinovac Biotech Ltd. has been given to tens of thousands of people in China under an emergency use program launched in July targeting specific groups with high infection risks. Regulators are also reviewing for approval a similar vaccine created by state-owned China National Pharmaceutical Group Corp., known as Sinopharm.

The Sinovac shot has made progress in overseas phase 3 clinical trials, the company said Wednesday. The tests showed that the product provides protective efficacy and meets the technical standards of the World Health Organization and China’s State Food and Drug Administration, the company said.

CoronaVac has been ordered by places including Thailand, Singapore, Hong Kong and Brazil. The president of Indonesia received it on live television in a show of confidence designed to persuade people to take the inoculation. But the shot has also faced skepticism over a lack of transparency on safety and efficacy.

Brazilian biomedical center Butantan Institute, which partnered with Sinovac to test and produce the vaccine in Brazil, said Jan. 12 that the vaccine showed general efficacy of 50.38%, much lower than rival products developed by a Pfizer-BioNTech partnership and Moderna Inc.

Clinical trials in Indonesia showed that the vaccine is 65.3% effective, according to an analysis obtained by Caixin. A late-stage trial in Turkey showed 91.25% effectiveness, but researchers said the results were based on data from only 1,322 people.

China’s Covid-19 vaccines have won approval in a dozen countries for emergency use, but the failure to publish detailed trial data could undermine public trust, a leading Chinese researcher said in a recent interview.

Ding Sheng, dean of Tsinghua University’s School of Pharmaceutical Sciences and director of the Global Health Drug Discovery Institute (GHDDI), called for the original clinical trial data from Chinese experimental vaccines to be made public so that experts can better assess their efficacy and eliminate lingering safety concerns in China and abroad.

On Dec. 31, state-backed vaccine developer and Sinopharm subsidiary China National Biotec Group Co. (CNBG) obtained conditional approval from Chinese regulators for general domestic distribution of its Covid-19 vaccine. CNBG previously said its vaccine is 79.34% effective, but it didn’t reveal details of its Phase 3 clinical trials, such as the numbers of participants, their ages and how many confirmed infections were observed.

Both of the Chinese vaccines are based on traditional vaccine technology and use inactivated coronavirus to trigger an immune response. Vaccines developed by the Pfizer-BioNTech venture and Moderna use a new technology called synthetic messenger RNA to activate the immune system against the virus.

In December, Sinovac secured $515 million from Sino Biopharmaceutical Ltd. to boost research and production of its coronavirus vaccine. The company said it would be able to manufacture more than 300 million doses of the vaccine annually and plans to complete construction of a second production line by the end of year, which could double its Covid-19 vaccine production capacity.