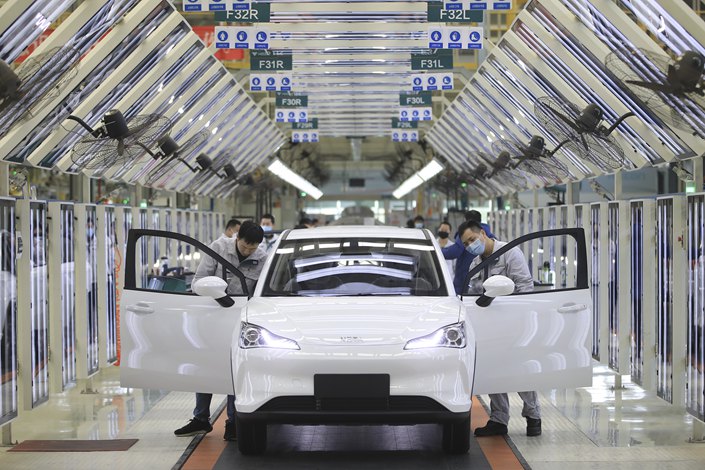 Shanghai’s 50% goal far outstrips the national target of having new-energy vehicles make up 20% of new car sales by 2025. Photo: VCG

Pure electric vehicles should make up half of the new cars sold in Shanghai by 2025, according to an aggressive plan that comes as localities are looking for ways to slash carbon emissions to meet ambitious national pledges.

The financial hub also wants all buses, government cars and trucks operating downtown, as well as postal vehicles, to be new-energy vehicles (NEVs) by the same year, according to the latest five-year plan on NEV development released Thursday.

Pure electric vehicles — which run solely on battery power — are one kind of NEV, along with other types such as hybrid cars and those powered by hydrogen fuel cells.

The city’s 50% goal far outstrips the national target of having NEVs make up 20% of new car sales by 2025. Shanghai hasn’t disclosed what proportion of current new car sales are made up of pure electric vehicles.

The city’s NEV sales jumped 92% last year to 121,000 units, helped by the city’s longstanding policy of allowing owners of such vehicles to get a free license plate immediately. Buyers of traditional gas-powered vehicles may need to wait months or even years to get the chance to purchase a license plate at a government-run auction.

Shanghai has also said it will encourage overseas enterprises with advanced technology to invest in vehicle manufacturing projects in Shanghai. Tesla chose the city for its first factory outside North America, which began operations in 2018.

It also plans to nurture multiple NEV parts manufacturers with tens of billions of yuan of revenue through measures including supporting local firms to conduct acquisitions at home and abroad.

The city has asked local auto giant SAIC Motor Corp. Ltd. to ensure that 20% of its new car sales are NEVs by 2025.

Data released by the country’s National Energy Administration suggested only around 7,200 hydrogen cars were operating across China as of last July, with around 80 charging stations nationwide.

Local and national authorities are looking for ways to fulfill a commitment by President Xi Jinping in September to make the world’s largest emitter reach peak carbon emissions before 2030 and become “carbon-neutral” by 2060. In December, Xi further committed to cutting China’s emissions per unit of GDP by 65% by 2030 from 2005 levels.