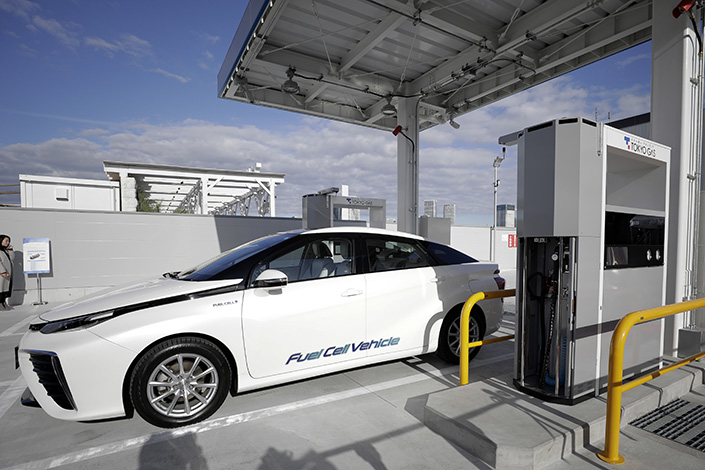 A hydrogen refueling station in Tokyo in January 2020. Photo: VCG

China has been cranking up investments in hydrogen, a renewable and potentially clean source of energy. The country’s central and local governments have inked the hydrogen industry into the 14th Five-Year Plan (2021-25) as one of China’s six industries of the future.

The China Hydrogen Alliance, a government-supported industry group, predicts that by 2025, the output value of the country’s hydrogen energy industry will reach 1 trillion yuan ($152.6 billion) and by 2030, China’s demand for hydrogen will reach 35 million tons, accounting for at least 5% of China’s energy system.

Increasing the use of hydrogen, a gaseous element in great abundance, could help support the government’s goals of dramatically reducing China’s emissions of carbon dioxide, one of the main greenhouse gases driving climate change. Hydrogen fuel cells use chemical reactions to generate zero-emissions electricity that can be used in transportation and other applications. Expanding production of hydrogen and developing refueling infrastructure may help increase the number of new-energy vehicles on the road and help China top out carbon emissions before 2030 and reach carbon neutrality by 2060.

But to achieve those goals, technological obstacles need to be overcome to lower the costs of extracting, storing, transporting and delivering the material to end users. China’s advantages lie in strong government support and a huge market. Here are four things to know about the country’s plans for hydrogen.

What are China’s policies on hydrogen development?

China’s 14th Five Year Plan labels hydrogen a “frontier” area that the country pledges to advance. Even though a national strategy for hydrogen development has yet to be developed, 16 provinces and cities have launched their own five-year plans that specifically feature hydrogen. For example, Beijing’s plan includes accelerated planning and construction of hydrogen refueling stations. Jiangsu province’s plan includes development of hydrogen fuel cell vehicles and hydrogen fueling infrastructure.

China is initiating a four-year program to support local governments in researching hydrogen technology and developing an industry chain. Five city groups, including the Beijing-Tianjin-Hebei cluster, Guangdong and Henan provinces, and Shanghai have been selected for demonstration projects, industry participants told Caixin, although the central government has not published the names of cities engaged in the program. Demonstration governments that meet certain targets will be awarded as much as 1.7 billion yuan as a fiscal bonus.

Five ministries including the Finance Ministry, the Ministry of Industry and Information and the National Energy Administration delayed releasing the final list because the review process has strict requirements and competition among provinces is fierce, industry participants said.

What are the main challenges to implementing the plans?

High production costs have kept hydrogen-powered cars from reaching a commercialized stage in China and elsewhere. The difficulties of storing and transporting the highly explosive gas add to the costs. At current market prices, hydrogen to power a fuel cell car in China costs about 70 yuan per kilogram. The figure needs to come down to less than 40 yuan per kilogram before hydrogen-powered cars can be competitive with traditional gasoline-powered vehicles, according to an estimate by Fu Guanyun, a researcher at the National Development and Reform Commission (NDRC), China’s state planner.

The most mature method for the large-scale production of hydrogen without extracting it from fossil fuels is water electrolysis, using electricity to split water molecules into oxygen and hydrogen. The key challenge of electrolytic hydrogen production is cost, including the initial capital expenditure and electricity expenses.

Moreover, China generates most of its electricity by burning coal, which spews vast amounts of carbon dioxide into the atmosphere. Based on the average carbon emissions from generating electricity, extracting 1 kilogram of hydrogen from water would produce about 35.84 kilograms of carbon dioxide. That would be three to four times the carbon emissions from producing 1 kilogram of hydrogen from fossil coal or oil.

One solution would be to use renewable energy — such as hydroelectric, wind or solar power — in the electrolysis of water. Beijing Jingneng Power Co. Ltd. (600578.SH), a state-owned coal power producer, is building a 23 billion yuan green hydrogen plant in Ordos in North China’s Inner Mongolia autonomous region to be powered by solar and wind energy. China Petroleum and Chemical Corp. plans to launch its first solar and wind-powered green hydrogen project, also in Ordos, in 2022. Since 2019, China has had more than 30 green hydrogen projects in preparation.

The mainstream view in the industry is that green hydrogen will be economical only when the cost of renewable power falls below 0.2 yuan per kilowatt-hour. The cost of wind and solar electricity now is around 0.3 yuan per kilowatt-hour. Zeng Tao, chief analyst of power equipment and new energy at the investment bank China International Capital Corp. (CICC), said he expects that green hydrogen can cost less than coal-based hydrogen by 2040.

In terms of hydrogen delivery, most of China’s hydrogen is transported by truck, which is more expensive and less efficient than transportation by pipeline. China mainly uses trailers with a capacity of 300 kilograms of hydrogen, which is less than half the capacity of trailers commonly used in Western countries.

Where does China stand in the global hydrogen race?

More than 30 countries have developed hydrogen roadmaps, and 228 large-scale hydrogen projects were announced across the value chain, according to a report published in February by the Hydrogen Council, a global CEO-led initiative of leading companies. The organization projects that hydrogen could meet 18% of total global energy demand and create a $2.5 trillion market with more than 30 million jobs by 2050.

“In terms of green hydrogen production technology, China basically stands at the same starting line with the U.S. and European countries,” Wang said.

How is the industry leader doing?

Even with its world-leading technology and sales volume, Toyota’s fuel cell vehicle portfolio is clearly at an early stage. As in China, infrastructure is a serious impediment to the adoption of fuel cell vehicles in Japan, according to a February report by Weekly Toyo Keizai. There are only 135 hydrogen fueling stations in the country, subsidized by the government, compared with 30,000 public charging stations for electric cars.

The Japanese government set up a committee to get automakers and energy companies to work together in promoting hydrogen energy. But in practice, companies are pursuing their own interests, and hydrogen projects face difficulties moving forward quickly, said Ma Tiancai, deputy director of China’s National Fuel Cell Vehicle and Power System Engineering Research Center. China has a stronger environment for nurturing the fuel cell vehicle industry, Ma said, as all parties are more willing to sacrifice short-term interests and promote the industry. In addition, China is rich in hydrogen resources and has far more production capacity than Japan, Ma said.

Toyota may play a role in a segment of China’s hydrogen fuel cell vehicle industry that’s similar to Tesla’s role in battery-powered cars, Ma suggested. As the world leader in electric vehicles, the arrival of Tesla in China’s market has encouraged smaller domestic players to innovate and compete, which in turn could promote the growth of the whole industry.