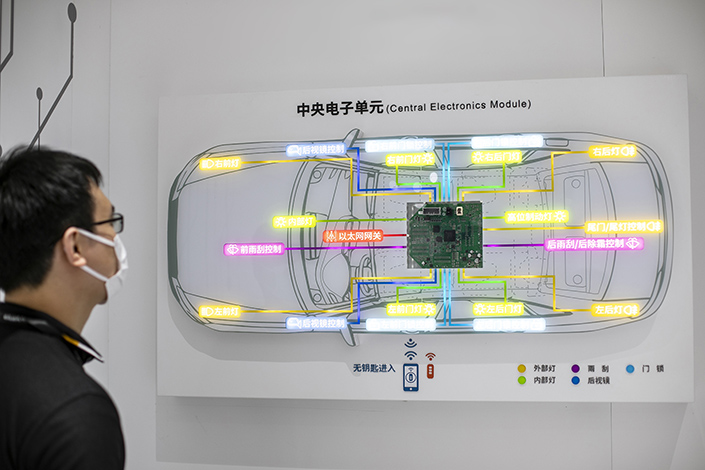 A visitor checks out a car chip at the Shanghai auto show on April 19. Photo: VCG

China vowed to penalize anyone found hoarding, profiteering, driving up or fixing the price of microchips, a vital component in auto manufacturing, according to a statement issued Tuesday by the national market regulator.

“Prominent issues such as speculation and high prices in the automotive chip market” triggered the investigation, the State Administration for Market Regulation (SAMR) posted on its website.

The probe, prompted by inside tips and market monitoring, comes in response to concerns that distributors have gained from a pandemic-induced global semiconductor shortage which has squeezed production across a wide range of sectors.

Chinese fintech giant Ant Group Co. Ltd.'s first-quarter profit droped 37.5% from the previous quarter, according to Caixin calculations, as it was required to comply with new rules on once-lucrative microlending and restructure its business.

The Jack Ma-backed conglomerate contributed 4.5 billion yuan ($696 million) to e-commerce giant Alibaba Group Holding Ltd.’s profit in the second quarter, according to a Tuesday filing with the Hong Kong bourse. Based on Alibaba’s one-third stake in Ant Group and its accounting methods, that means Ant Group raked in $2.1 billion in profit in the first quarter of this year, up 48% year-on-year.

China’s services sector expanded at a faster pace in July, boosted by the accelerating recovery in business activity and new orders as some domestic Covid-19 flare-ups came under control, a Caixin-sponsored survey showed Wednesday.

The Caixin China General Services Business Activity Index, which gives an independent snapshot of operating conditions in the sector, surged to 54.9 in July from a 14-month low of 50.3 the previous month. Readings higher than 50 signal expansion.

Overall, the Caixin China General Composite PMI, which covers both the manufacturing and services sectors, rose to 53.1 in July from 50.6 the month before, according to the survey carried out between July 12 and 22.

The platform, Micro Connect, will focus on the domestic demand sector in China, according to Zhang Gaobo, CEO of private equity firm Oriental Patron Financial Group Ltd. and Li’s partner in the project. The vast majority of investments will be related to the service and retail sector, Li said at a press conference.

Central China’s Wuhan will start testing its entire population of 12 million while tightening restrictions after Covid-19 cases reemerged in the city for the first time in more than a year.

Wuhan in Hubei province reported seven Covid-19 infections over the past two days, the first local transmissions recorded in the city since June 2020. City authorities locked down some communities linked to cases of infection and ordered the closing of schools and summer camps.

From rowing and fencing to track and field, Chinese athletes have stood tall in traditionally Western-dominated events at the 2020 Tokyo Olympics, breaking records and propelling the nation to sit atop the overall medal tally so far.

While China has long dominated sports such as diving, gymnastics and table tennis, breakthroughs in many of these new sports share a similar trait that competitors now acknowledge played a significant role in their success: foreign coaches.

Just some of the standout achievements included the Chinese men’s double sculls rowing team, who on July 28 won the bronze medal, the first time the nation had made it to the podium in that event. Meanwhile, sprinter Su Bingtian set an Asian record of 9.83 seconds in the 100-meter semifinal and although he didn’t win a medal, he became the first Chinese athlete in history to run in a final.

One of China’s top technology firms is killing off a short-video app that briefly made it big in the United States last year before becoming embroiled in a series of bitter controversies.

Kuaishou Technology, whose eponymous app is a major rival to ByteDance Inc.’s Chinese version of TikTok, said Wednesday that it will stop services for another of its offerings, Zynn.

The platform shot to the summit of download charts in the United States soon after it launched in May 2020, partly thanks to its system of paying users who signed up or referred friends.

The three-year-old startup expects to launch its first model by year-end. In 2020 the company raised $220 million in two rounds of financing.