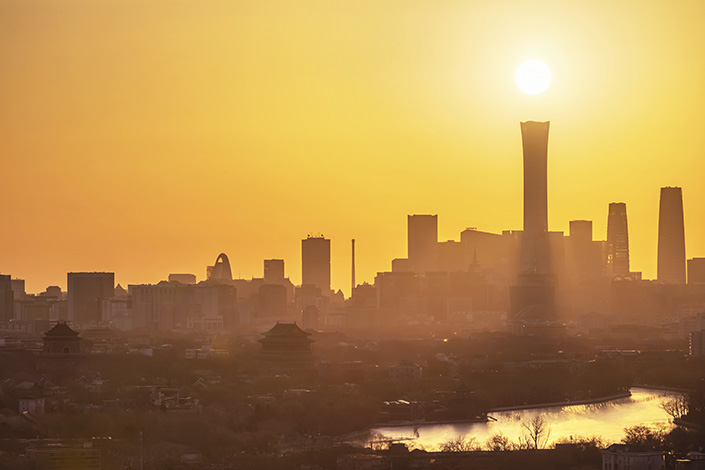 The next few weeks and months will be critical in deciding the fate of China Huarong Asset Management Co. Ltd., the state-owned financial conglomerate that’s on the verge of collapse after racking up hundreds of billions of yuan of debt.

Months of effort by the company and regulators to put together a rescue plan and secure a life-saving infusion of cash has finally borne fruit, with Huarong announcing on Aug. 18 that a consortium of financial companies led by state-owned heavyweight Citic Group Corp. have agreed in principle to recapitalize and restructure the stricken bad-debt manager.

The involvement of Citic Group, which is backed by more than $1 trillion of assets, underscores the importance the government has placed on tackling Huarong’s problems and defusing the potential risks the company’s failure could pose to the financial system. The Aug. 18 announcement came just a day after a meeting of the Central Financial and Economic Affairs Commission, the top economic and financial policymaking body that’s chaired by President Xi Jinping, a signal (link in Chinese) that the basic principles of Huarong’s restructuring and risk resolution plan have been approved by the top leadership.

Citic Group is China’s second-largest financial holding company and one of the oldest state-owned commercial financial institutions. It was set up in 1979 at the start of the reform and opening-up era by Rong Yiren, an economic adviser to Deng Xiaoping and who later became the country’s vice president. The company has dozens of subsidiaries, including several listed units, spread across sectors including financial services, mining and construction, and is wholly owned by, and answers directly to, the State Council.

Many of Citic Group’s businesses overlap with Huarong, including banking, securities, trusts, consumer finance and financial leasing, and its expertise in these areas could help in turning the debt-ridden conglomerate around and making it a viable business. On the flip side, Huarong’s experience with bad-debt resolution could help Citic Group deal with its own risky assets, notably its iron ore project in Australia and its stake in debt-ridden (link in Chinese) Citic Guoan Group Corp.

In the Aug. 18 statement, Huarong said that it had signed non-binding investment framework agreements with Citic Group and four other state-owned or state-backed companies: China Insurance Investment Co. Ltd., China Life Asset Management Co. Ltd. (China Life AMC), China Cinda Asset Management Co. Ltd. (Cinda AMC), and Sino-Ocean Capital Holding Ltd. The five companies intend to make strategic investments in Huarong by subscribing to new shares in the Hong Kong-listed company, according to the statement, which gave no information about the timing of the share issue or the amount of money involved.

Huarong may bring in even more strategic investors, according to its Chairman Wang Zhanfeng. In a conference call on Aug. 30, he said (link in Chinese) foreign and domestic institutions are interested and he wasn’t ruling out the participation of more investors.

Even with framework agreements in place, there’s still a rocky road ahead to get to a firm deal, and there will be tough negotiations and decisions to make to secure the financing Huarong needs and ensure the restructuring succeeds.

The company reported a net loss of 102.9 billion yuan in 2020 after taking an impairment loss of 107.8 billion yuan to reflect the drop in the value of investments made mostly under the five-and-a-half-year leadership of Lai Xiaomin. Lai was put under investigation for corruption in April 2018 and executed in January 2021 after being convicted of accepting 1.79 billion yuan in bribes.

Sources with knowledge of the matter told Caixin that about 380 billion yuan of assets sitting on Huarong’s balance sheet have been classified by its auditor Ernst & Young as nonperforming under China’s five-category asset classification system, which means they are either substandard, doubtful or loss assets.

The decision to call in Citic Group marks the culmination of months of effort to come up with a workable restructuring proposal after many twists and turns. Huarong submitted plans for a capital increase, liquidity support, and divestiture of nonperforming assets to shareholders and regulators, and also proposed mergers involving other asset management companies and institutions, sources with knowledge of the matter said. But it was unable to get the support of regulators, other decision-making bodies and major shareholders. They include the Ministry of Finance, which directly owned 57.02% of the company as of June 30, and a further 4.39% through an investment firm the ministry controls along with Central Huijin Investment Ltd., the domestic investment arm of the country’s sovereign wealth fund.

With no viable solution on the table, Huarong’s restructuring stalled until finally, in June, Citic Group, with its immense financial firepower and government backing, was tapped to come to the rescue. The group dispatched a due diligence team from subsidiary Citic Securities International Co. Ltd., working with Cinda AMC and intermediaries including accounting firm KPMG, to comb through Huarong’s books, interview staff and carry out spot checks and onsite inspections of the projects it’s involved in. The team is due to complete its work in October and details of the strategic investment are scheduled to be finalized by Dec. 31, sources close to regulators told Caixin.

The investigation is aiming to uncover the true scale of the risk assets Huarong has accumulated over the years, as this will affect whether the risks can be controlled after the restructuring or whether they will be a drag on Citic Group.

China Life AMC should be able to inject at least 10 billion yuan into Huarong, sources with knowledge of the matter told Caixin. Set up in 2003 as a joint venture between state-owned insurance giant China Life Insurance (Group) Co. and subsidiary China Life Insurance Co. Ltd., it manages over 4 trillion yuan of assets. The parent company holds a 4.2% stake in Huarong.

Cinda AMC, like Huarong, is one of the four state-owned national AMCs set up by the government in 1999 to take over the nonperforming loans of the country’s “Big Four” state-owned commercial banks. Also listed in Hong Kong, Cinda could provide about 5 billion yuan of capital, industry insiders estimate.

It’s unclear as yet what contribution will come from Sino-Ocean Capital, an asset manager owned by Hong Kong-listed real estate company Sino-Ocean Group Holding Ltd. which itself is 29.6% owned by China Life Insurance (Group). Sino-Ocean Group holds a 4.5% stake in Huarong and was one of the cornerstone investors in its 2015 IPO.

In addition to leading the recapitalization of Huarong, Citic Group will be tasked with continuing the process of sorting out the company’s sprawling investments at home and overseas, selling off assets to pay down debts, and negotiating extensions to loans and bond repayments.

Under the leadership of Lai, the company deviated from its original mission of buying and resolving the bad debts of state-owned banks and embarked on a domestic and international spending spree. It acquired assets and invested in projects that have since gone sour, such as Ningxia Tianyuan Manganese Industry Group, which borrowed heavily from Huarong, and a piece of land on Jeju Island (link in Chinese) in South Korea. Valuing these assets and finding buyers won’t be easy.

“The nonperforming assets sector went through several years of reckless expansion, when companies led by Huarong aggressively scooped up packages of nonperforming assets,” one industry participant told Caixin. “Because it wanted to be the biggest, Huarong often bought packages at high prices. But in the current climate, the disposal of such highly priced assets isn’t going smoothly. Not only are they locking up a large amount of funds, they are also accruing losses.”

Sources close to Citic Group told Caixin that its restructuring strategy for Huarong will basically stick to the plan the company is already implementing as required by regulators, namely to spin off the financial subsidiaries and retain the asset management business and Huarong’s industrial assets.

Even before Citic Group got involved, Huarong had been working to offload non-core businesses and return to its original mission of resolving bad debts in the banking system after regulators in 2018 ordered AMCs to return to their roots.

Huarong will sell its stakes in its financial subsidiaries which have a string of valuable licenses for conducting business in securities, trusts, banking and financial leasing, Caixin previously revealed. Huarong had wanted to retain its securities license, but Citic Group already owns Citic Securities Co. Ltd., the country’s top brokerage by assets, and doesn’t need the license.

It has put the sale sign up on stakes in several subsidiaries, including Huarong International Trust Co. Ltd. and Huarong Consumer Finance Co. Ltd. (HCF), which has a valuable consumer lending license.

The obvious buyer for HCF would be a fintech company looking to expand into consumer finance. But one industry insider told Caixin that given the ongoing regulatory crackdown on misconduct of fintech companies, a deal would be unlikely to get the go-ahead. Bank of Ningbo Co. Ltd. and Hengfeng Bank Co. Ltd. have conducted due diligence on HCF, a source told Caixin. Huarong announced on Aug. 2 that it was putting its 70% equity stake in HCF for sale on a property rights exchange.

Huarong International Trust has been difficult to sell partly because of a parallel regulatory campaign on the trust sector that has made the company and the license it holds far less attractive to a potential buyer. The unit is also mired in debt and Huarong also announced on Aug. 2 that it would attempt to restructure the company through a debt-to-equity swap and equity transfer with its main institutional creditors.

Huarong has also shifted more than 200 billion yuan of problematic assets to Huarong Overseas Chinese Asset Management Co. Ltd., a subsidiary that is 91% owned by Huarong’s other wholly owned unit, Huarong Zhiyuan Investment and Management Co. Ltd. In April 2020, Zhiyuan said it wants to sell its stake, a move seen as an attempt to ringfence the risky assets and separate them from Huarong’s main business. But no progress on that plan has been made public since then.

How quickly Citic Group will be able to execute its strategy and dig Huarong out of its financial hole remains to be seen. Regulators seized insolvent Anbang Insurance Group Co. Ltd. in 2018 and managed to offload the bulk of its assets and restructure the company within a two-year deadline. But they have struggled to sell other assets, notably New York’s iconic Waldorf Astoria hotel, and to find strategic investors for Dajia Insurance Group Co. Ltd., the company that emerged from Anbang’s ashes.

Bailing out Huarong could be an even tougher nut to crack. In the current economic and regulatory climate, its assets could be even harder to offload and Citic Group will also have to deal with the creditors who want their debts repaid.