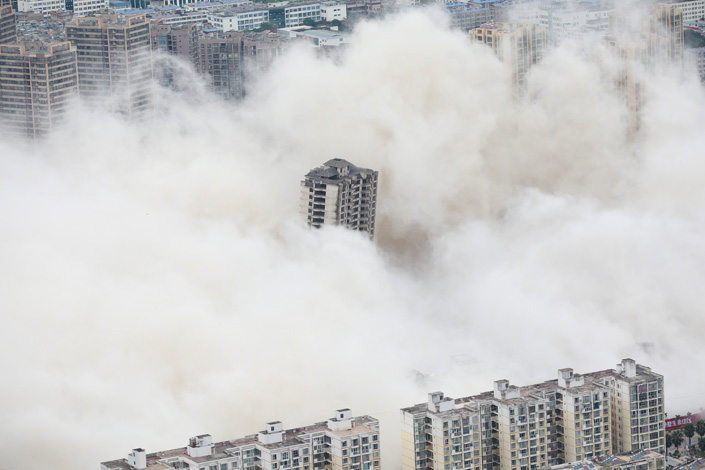 At least 10 of China’s large or midsize listed banks have reported a rise in their nonperforming loan (NPL) ratios for the real estate industry in the first half year, due in part to exposure to debt-ridden developers facing liquidity problems, according to Caixin calculations based on half-yearly earnings reports.

Hong Kong- and Shanghai-listed Industrial and Commercial Bank of China Ltd. (601398.SH), the world’s largest bank by assets, saw its ratio of NPLs from real estate corporations rise to 4.29% at the end of June from 2.32% at the end of last year, its half-year report shows. Another Hong Kong- and Shanghai-listed lender, China Merchants Bank. Co. Ltd. (600036.SH), reported a rise to (link in Chinese) 1.07% from 0.3%.

The increase in banks’ property-related NPL ratio reflects the real estate industry’s debt risks. Several once high-profile — and now indebted developers — such as China Evergrande Group and China Fortune Land Development Co. Ltd. (600340.SH), have been caught in a liquidity crisis, as financial regulators have moved to curb the sector’s leverage, severely squeezing their access to funding.

In one example, China Fortune’s total principal and interest on overdue debts had amounted to 41.5 billion yuan ($6.4 billion) as of late August following a liquidity crunch that began late last year, according to its half-year report (link in Chinese).

The North China-based developer reported a net loss attributable to shareholders of 9.5 billion yuan in the first half year, a reversal of 6.1 billion yuan in net profit during the same period last year.

Similarly, Ping An Bank Co. Ltd. (000001.SZ) Vice President Guo Shibang said at an investors’ meeting that the rise in the bank’s property NPL ratio was mainly due to one client, without identifying it.

The bank’s largest shareholder, Ping An Insurance (Group) Co. of China Ltd. (601318.SH), had reported the impact of its exposure to China Fortune. In the first half year, the insurance giant made 35.9 billion yuan worth of adjustments — including impairment provisions and valuation adjustments — to investments related to China Fortune, causing a 20.8 billion yuan reduction to its net profits, according to its latest interim report.