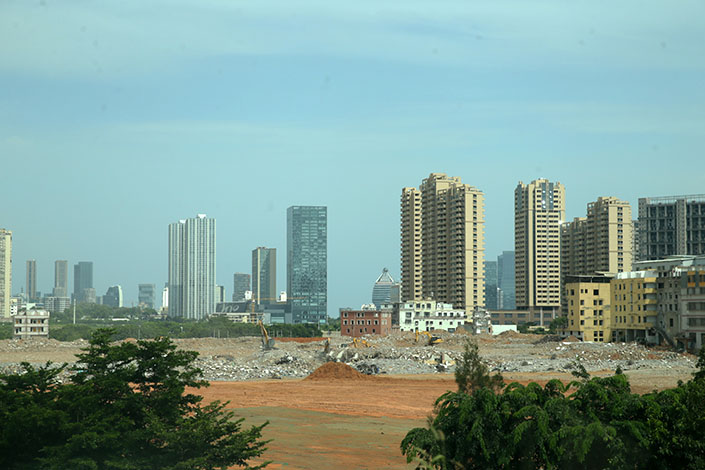 An old neighborhood is being demolished in Xiamen, East China’s Fujian province, on Sept. 9. Photo: VCG

Several key second-tier cities have seen lukewarm interest in land auctions since the middle of the year, research by China’s leading brokerage has revealed, adding to evidence that financial stress on property developers such as China Evergrande Group is growing after regulators intensified restrictions on their financing activities.

Land premiums, the additional price local governments achieve over the reserve price they set before the auction, have collapsed, data compiled by Citic Securities Co. Ltd. (600030.SH) show. The dramatic shift reflects growing reluctance by cash-strapped developers to pay top dollar for land amid a slowdown in sales of new apartments and curbs on their ability to increase their borrowings, notably the “three red lines” policy imposed by the People’s Bank of China and the housing ministry last year.

Local governments in nine cities, including Xiamen, Tianjin and Chengdu, held the second round of residential land auctions for 2021 during the period of June 10 to Sept. 17, Citic Securities said in a report issued Monday. They sold a combined 362 parcels of land at an average price that equates to 6,600 yuan ($1,021) per square meter based on the floorspace of the apartments in their building plans. That’s just 4.85% higher than the combined reserve price, the report said. Nearly 80% of the parcels were sold at the asking price. Six of the cities, which held land auctions in the second half of August or in September, achieved a premium of just 2%.

The numbers are a stark contrast to the performance in the second quarter, when 22 Chinese cities, including the nine highlighted by Citic Securities, held their first auctions of the year. The average premium achieved in those auctions was 15.1% (link in Chinese), according to a report by Guosheng Securities Co. Ltd.

The government this year began an overhaul of how local governments sell land-use rights as part of its campaign to keep residential property prices in check. It selected 22 cities to trial a change in the auction system for land for residential use, stipulating they could hold no more than three sales per year and requiring them to release a schedule of auctions in advance. Previously, most local governments put parcels up for sale on an ad-hoc basis throughout the year, usually with little advance notice. That created uncertainty for developers as they never knew when the next auction might be or which properties might come up for sale, contributing to the surging land premiums.

The lackluster bidding at auctions underscores developers’ waning appetite for adding to their landbanks as the government has restricted their access to debt, choking off the main source of funds for purchases. A source familiar with the matter told Caixin that some local governments have even aborted plans to hold auctions because of weak demand.

“There are two prerequisites for attracting property developers into buying land,” Citic Securities analysts wrote in their report. “First, the financing environment is normal, so that they do not need to use their working capital to repay large amounts of debt and shrink their balance sheets. Second, housing prices have not fallen significantly. Right now, both premises have been shaken.”

“The land market has turned cold,” they wrote.

Public information shows that in Tianjin, for example, among 61 plots of land available in the latest auction round, only 40 were sold, the sales of 19 were suspended, and two were left unsold. Of the 40 that did find buyers, 31 were transacted at the reserve price. Among the 75 land parcels listed for auction in Chengdu, 17 were suspended, six failed, and 52 were sold, with an average premium of 2.2%.

The three red lines policy has limited developers’ ability to take on more borrowing by linking increases to meeting three debt ratios. The policy has severely curtailed access to funds for many developers and fueled the liquidity crisis that’s engulfed Hong Kong-listed Evergrande. The developer has almost disappeared from the auction market because of financial problems that have shaken domestic and global markets.

Banks have also reined in their lending to property developers, partly as a result of the three red lines policy and because of other regulatory limits on lending to the real estate sector. Rising bad debts are also making them more cautious. In the first half of this year, at least 10 of China’s large and midsize listed banks reported a rise in their nonperforming loan ratios for the real estate industry, due in part to their exposure to debt-ridden developers facing liquidity problems.