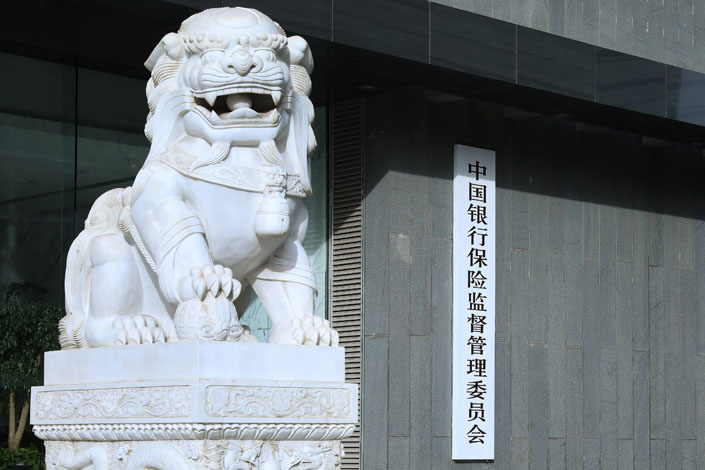 The headquarters of China Banking and Insurance Regulatory Commission in Beijing in October 2020. Photo: VCG

China has tightened control over the powers of large shareholders in banks and insurers to stop them embezzling funds, interfering in business operations and engaging in illegal conduct, following a string of corporate failures that posed risks to the stability of the financial system.

The rules are a response to the abuse of power by some shareholders and the illegal practice of tunneling, which involves directing loans or selling assets unfairly to other entities they controlled. The regulations are aimed at protecting the rights of banking and insurance institutions and their stakeholders, the China Banking and Insurance Regulatory Commission (CBIRC) said in a statement Thursday (link in Chinese).

“In recent years, major shareholders in a small number of banking and insurance institutions have abused their shareholders’ rights, inappropriately interfered in corporate operations, illicitly obtained controlling power, and used related-party transactions to transfer interests and shift assets, severely harming the lawful rights and interests of small and midsize shareholders and financial consumers,” the CBIRC said (link in Chinese). “The rules will strengthen the responsibilities and duties (of major shareholders) with regard to their conduct as shareholders, governance and transactions.”

The regulations, which went into effect on Sept. 30, follow a draft that was issued in June for public feedback. They are part of a series of new rules to improve corporate governance at financial institutions after a string of high-profile scandals that exposed the risks that improper conduct posed to the stability of the banking and insurance system. The CBIRC started a crackdown on misconduct by major shareholders of banks and insurance companies in 2019 and has doled out 140 million yuan ($23.3 million) in fines, punished 395 people and kicked out over 2,600 shareholders found to have violated rules, it said in April.

One notorious example was the failure of Baoshang Bank Co. Ltd. which was controlled by Tomorrow Holding Co. Ltd., the investment vehicle of fallen tycoon Xiao Jianhua. From 2005 to 2019, the secretive conglomerate illegally borrowed 150 billion yuan from the bank through 209 shell companies that all ended up as nonperforming loans, Caixin has previously reported. The bank, which was on the verge of collapse, was seized by the government in 2019 and was restructured in an operation that eventually led to the lender’s bankruptcy.

Heavily indebted property developer China Evergrande Group is the latest to come under the spotlight. The company, which is saddled with some $300 billion of liabilities, was the biggest shareholder in regional lender Shengjing Bank Co. Ltd. The lender holds a substantial amount of Evergrande bonds and had related-party transactions of more than 100 billion yuan with the developer. Evergrande last month agreed to sell part of its stake in Shengjing Bank to a local state-owned enterprise and to use the proceeds to pay back some of its debts owed to the lender.

They are also barred from using borrowed money to buy stakes in the institutions and must only use their own funds. They are prohibited from concealing from regulators the names of their actual controllers or their connections with other shareholders.

The definition of a “large shareholder” has been broadened to take account of the fact that many small and midsize institutions have a scattered shareholding structure with few controlling shareholders. The CBIRC now includes key minority shareholders with substantial influence as large shareholders.

The regulations lay out six criteria, including holding a stake of 15% or more in any of the “Big Six” state-owned banks, holding 10% or more in a city or rural commercial bank, and the nomination of two or more directors to a company’s board. If an investor meets one of them, it must be classified as a large shareholder.