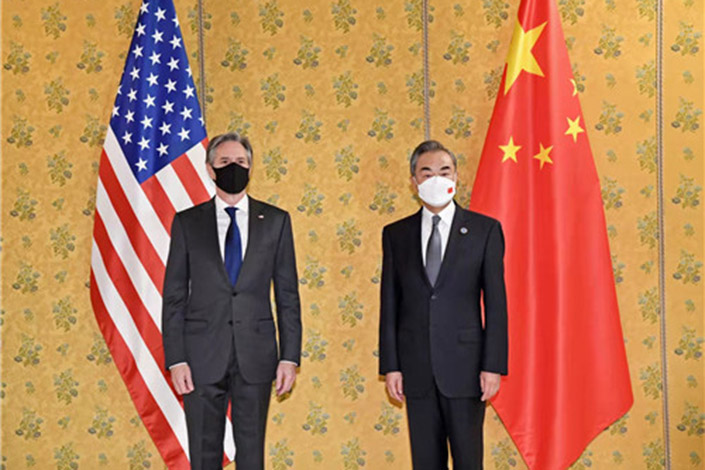 Foreign Minister Wang Yi meets with U.S. Secretary of State Antony Blinken in Rome on the sidelines of the G-20 Leaders’ Summit on Sunday. Photo: Xinhua

Chinese Foreign Minister Wang Yi has called on the United States “to pursue a real one-China policy” during his meeting with U.S. Secretary of State Antony Blinken on the sidelines of the G-20 summit on Sunday, noting that the bilateral relations would be damaged if Taiwan issues are mishandled, according to the Chinese foreign ministry.

Wang made the remarks as he met Blinken in Rome, their second in-person meeting this year after the two countries held their first high-level face-to-face meeting in March in Anchorage, Alaska, at an event that was characterized by tense exchanges.

The Chinese foreign ministry has urged the U.S. to stop playing the “Taiwan card,” following Blinken’s statement last week that called on all United Nations member states to support Taiwan’s participation in the U.N. system, including the International Civil Aviation Organization and the World Health Organization.

Chinese foreign ministry spokesperson Zhao Lijian said Taiwan’s participation in international organizations must be handled in accordance with the “One China” principle, which “does not allow unilateral challenge or distortion by the U.S.”

Prior to his meeting with Blinken, Wang on Friday warned countries including the U.S. against their claims of supporting Taiwan’s participation in the U.N. system and in the international community, saying the practice “violates their political commitments when they established diplomatic relations with China” and “damages the purposes and principles of the U.N. Charter.”

“They could not stop the one-China principle 50 years ago, and they are even less likely to succeed today in the 21st century. Should they insist on going down the wrong path, they must pay the price,” he said.

During his meeting with Blinken on Sunday, Wang said that bilateral relations “in the past few years have suffered an all-round impact due to the wrong China policy pursued by the United States” and that the U.S. “has wantonly interfered in China’s internal affairs.”

Beijing has been urging the U.S. to use caution on matters related to Taiwan, which has been included in the detailed ground rules China laid out in late July for engagement with the Biden administration on bilateral issues.

In September, the foreign ministry warned the United States against recognizing a change of the name of the Taipei Economic and Cultural Representative Office in Washington to the “Taiwan Representative Office.” Last month, a Ministry of National Defense spokesperson urged the U.S. to stop any form of official exchange or military contact with Taiwan following a U.S. statement that said the Pentagon will help Taiwan maintain its defensive capabilities.

Wang said Sunday that the U.S.’ claim that China’s change of the status quo was the cause for the tension across the Taiwan Straits was “misleading,” saying that the situation has arisen as “the Taiwan authorities have repeatedly tried to break through the one-China framework,” and criticizing the U.S. for its “connivance and support for ‘Taiwan independence’ forces.”

For his part, Blinken was quoted in the Chinese foreign ministry’s statement as reiterating that the U.S. will continue to adhere to the one-China policy and saying the country “is willing to maintain communication with China, manage differences responsibly, and avoid confrontation or crisis.”

A readout issued by the U.S. Department of State said Blinken has “underscored the importance of maintaining open lines of communication to responsibly manage the competition” between the two countries. The statement said Blinken also “raised concerns about a range of PRC actions that undermine the international rules-based order and that run counter to our values and interests and those of our allies and partners,” including issues related to Taiwan.

The two senior officials also discussed issues including climate change, energy supply, the situation on the Korean peninsula, Myanmar and Afghanistan, according to the Chinese foreign ministry.