In Depth: Combating the North American Pest That Has Reveled in Beijing’s Wet Summer 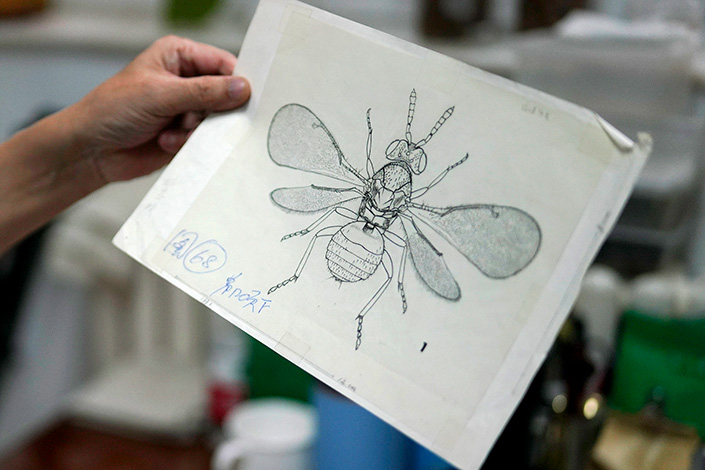 A sketch of a white moth drawn by Yang Zhongqi, the chief scientist of the Chinese Academy of Forestry.

After 18 years, residents in Beijing have become familiar with the small snow-white moth. It can grow to a centimeter long, and with two long tentacles, white wings and a fluffy back, looks something like a small hat. But this invasive pest from North America has a destructive power that has earned it the nickname, the “white robe wizard.”

In late September, a large number of dark gray caterpillars, the larvae of the moth, were seen on Beijing’s roadsides. The insect, which feeds on the leaves of trees and crops such as corn, appears to have enjoyed the city’s recent months of high temperatures and high humidity, reproducing in large numbers. This summer’s frequent rainfall also washed trees sprayed with pesticides, undermining urban pest prevention and control efforts.

The pest, responsible for damaging 179 species of plants, was first found in the northeastern Chinese province of Liaoning in 1979, before spreading to Shandong and Shaanxi provinces and causing a moth plague in the early 1980s. As of this year, the insect has been spotted in at least 607 counties in 13 provinces. In the Chinese capital, the insect was first found in Pinggu district in September 2003, before spreading across 16 districts. They have damaged 179 species of plants, feeding on leaves and crops such as corn.

As the country faces growing threats from invasive species — including both terrestrial and aquatic animals and plants that have been mostly artificially introduced — authorities have been left counting the financial damage, estimated at 200 billion yuan ($) in losses annually. The government has in recent years ramped up efforts to stop nonnative species from destroying crops, damaging farmers’ livelihood and threatening native species’ survival, under the belief that the prevention and control of alien species invasions is directly related to China’s food security, biosecurity and ecological security. Ecological experts say these efforts should be better designed and implemented, possibly in coordination between government agencies and a special department under the State Council.

There are currently more than 660 invasive species in China, according to the Ministry of Ecology and Environment, and 71 of them have caused or have the potential to threaten the country’s natural ecosystem. Among the 100 hardiest invasive species listed by the International Union for the Conservation of Nature, 51 have been found in China, with 13 of them alone causing annual economic losses of more than 57.4 billion yuan.

Globally, invasive species have become the second leading cause of global biodiversity loss, following habitat reduction, and are also listed as one of the three most difficult environmental problems to solve. The combined economic losses of the United States, the United Kingdom, Australia, South Africa, India and Brazil total more than $314 billion each year.

In early October, China vowed to strengthen control over invasive species in its first biodiversity white paper, released ahead of the United Nations Biodiversity Conference in Kunming, Southwest China’s Yunnan province. Zhao Yingmin, vice minister of the Ministry of Ecology and Environment, noted that the country will work on improving the early warning and monitoring system for invasive species, which threaten biodiversity as they destroy the structure and function of the ecosystem by suppressing or crowding out native species.

“In recent years, there has been a trend of increasing numbers of invasive species, with accelerated frequency, expanded scope of their spread and severe damages,” said Zhan Aibin, a professor at the Chinese Academy of Sciences’ Research Center for Eco-Environmental Sciences.

China has battled a number of crop-devouring pest outbreaks in recent years, including an invasion of red imported fire ants, locusts from neighboring countries and the spread of fall armyworms, a type of moth caterpillar native to Africa that feeds on crops like maize, rice and sorghum.

As for the white moth, China has been battling its invasion using a native species of bees, a known predator, discovered by Yang Zhongqi, chief scientist of the Chinese Academy of Forestry, who named the species “white moth Zhou’s gnat wasp” in a paper published in 1989. Yang’s findings prove that native species can also be used in biological pest control, counter to an earlier belief that predators must be introduced from the invasive species’ place of origin.

Yang’s contribution won him the Scientific Achievement Award from the International Union of Forestry Research Organizations (IUFRO) in 1995, making him the first Chinese scientist to win the award since the IUFRO was established 130 years ago.

In recent years, Beijing has released 1 billion “white moth Zhou’s gnat wasps” each year to help control the white moth. In late July, the forestry and parks bureau in Daxing district released 200 million of the insects to prevent a third generation of the white moth from appearing.

Compared with pesticides, which need to be applied every year, biological pest control is an intervention based on the ecological environment, said Zhao Jiali, senior engineer with the Beijing forestry and parks resources protection center.

“The continuous release of predators could help reach a state of dynamic balance with pests, and then we only need appropriate intervention or even no intervention,” she said, noting this could be the ideal situation, while other supplementary artificial and physical pest control measures are also needed.

Apart from the white moth, the pinewood nematode, a species that infects pines and other trees, is also having a concerning impact since it was first found in 1982 in Nanjing, East China’s Jiangsu province. According to the National Forestry and Grass Administration, by the end of last year, the pest had spread to 718 counties and 5,479 townships in 17 Chinese provinces, leaving some 19.47 million pine trees dead.

Beijing, which is home to some 1.59 million mu (261,900 acres) of pine forests and many trees that are more than 300 years old, faces a “serious threat” posed by the pinewood nematode, Zhao said. The city monitors pine forests with drones and also uses biological methods to reduce the pest’s numbers.

The invasive plant species, ragweed, has been in the Chinese capital for more than two decades. It devastates farmland with drought, and directly harms human health with its pollen, a significant allergen and asthma trigger. Liu Quanru, a professor at Beijing Normal University’s School of Life Sciences, noted that though harm brought on by invasive plant species is slow to be seen compared with pests, there should also be early prevention and control efforts.

Invasive alien species in aquatic ecosystems have severely damaged the local ecosystem and have caused huge economic losses. Each year, China spends more than 500 million yuan on dealing with water hyacinth, a rapidly growing floating plant. Shanghai alone removes 800,000 tons of the invasive species from its waters every year.

A 2001 survey showed that among the 283 invasive species identified in China, only 3.1% were brought into the country naturally by wind or birds and 43.9% were brought into China by trade and tourists, while 39.6% were intentionally introduced.

The smooth cordgrass, which was introduced from the United States in 1979 for greening and to help control coastal erosion, showed its usefulness when a typhoon landed in Wenzhou, East China’s Zhejiang province, in 1994, destroying 70% of the seawall. However, the storm left those parts planted with the grass unaffected. Nonetheless, the grass kept growing to the point where it not only hindered the growth of other plants around it, but also affected seafloor creatures and birds.

As of this year, Chinese scholars found that 48.3% of China’s coastal salt marshes are taken over by smooth cordgrass, covering an area of about 600 square kilometers, becoming one of the greatest threats to the country’s coastal ecology.

Mosquitofish, a species of freshwater fish once believed to be able to prevent malaria by eating mosquito larvae, was introduced to Shanghai from the Philippines in the last century and has now widely spread in lakes and ponds south of the Yangtze River. It can reproduce in both saltwater and freshwater, and has become a dominant species in the lowland waters in southern China, threatening the survival of native fish, and even frogs, snails and other amphibians.

How to build a line of defense?

China’s laws and regulations require preliminary risk assessments to be conducted before foreign species are imported. Zhang noted that the supervision and management of the use of foreign species should be strengthened, and relevant entities should take safe and reliable emergency response measures to prevent the introduced species from escaping and spreading.

With the acceleration of globalization, cross-border trading and people exchanges have exacerbated the possibility of the introduction of invasive species. According to customs statistics, in the first eight months of this year, China’s total trade grew 23.7% year-on-year, while customs seized 288 species of pests across the country.

Some imported plants, such as the Buddhist pine, an evergreen tree, may carry alien invasive species. These kinds of products have to be carefully screened to see if they meet requirements prior to being imported, according to Zhang Yongjiang, the deputy director of Chinese Academy of Inspection and Quarantine’s Institute of Plant Quarantine.

Zhang noted that technology can already detect micro viruses in seeds, and the time needed to detect viruses in plants has shortened from up to a week to an hour or even a few minutes, meeting the demands of customs inspections. The institution has also developed monitoring technologies for 18 pests including fall armyworms, the invasive agricultural pest.

Zhan suggested that a thorough survey of invasive species be carried out to establish a database, and a comprehensive early warning system should be developed and established.

Liu, the professor, suggested that a special department should be established under the State Council to design the entire prevention, control and early warning mechanism of invasive species in order to break the barriers between various departments and unify prevention and control approaches.

He also pitched the idea of creating a designated expert committee to strengthen the connection between the academic community and practitioners, considering that invasive alien species involve multiple ecosystems and academic disciplines.

"At present, both the Ministry of Ecology and Environment and the Ministry of Agriculture and Rural Affairs oversee the prevention and control efforts, but it is not clear who will organize the work or how it will be organized,” he said. “There can be better scientific prevention and control if problems can be reported in a timely manner and expert opinions can be gathered.”

“The national boundaries have pulled up defense lines for prevention and control of invasive alien species, but this does not mean that there are high walls for international exchanges,” he said.