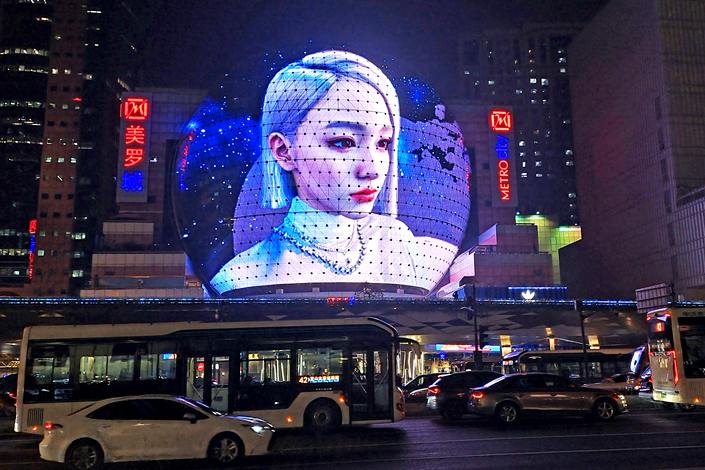 During the 2022 Winter Olympics, you didn’t have to look too far in China to catch a glimpse of one of the stars of Team China, Chinese-American skier Eileen Gu, whether it was on billboards, bus station ads or TV screens.

One admittedly small contributor to the ubiquity of Gu’s image was Meet Gu, an autonomous digital likeness created by Migu Video, a video site backed by state-owned wireless carrier China Mobile Ltd. In industry speak, Meet Gu is a “simulated human (虚拟人) product” that looks and sounds a lot like the star skier herself. During the games, she could be seen chatting with television hosts and members of the audience.

The digital human concept is being driven by the rise of the tech buzzword “metaverse” in which they are expected to play a key role in live, high-fidelity interactions between real people in the digital world.

The move is Beijing’s latest attempt to bolster financial stability as risks continue to arise from areas including rural banks, a debt crisis in the slumping property market and volatility stemming from geopolitical tensions.

Here are the key things to know about the proposed legislation and how it will work.

13 officials punished after investigation into case of ‘caged woman’

Authorities in Northwest China’s Shaanxi province have detained at least two people for suspected human trafficking after an investigation into a high-profile case of a woman discovered in an “iron cage” found she had been abducted in 2010 and was later bought by her husband.

A statement issued Wednesday said 13 officials involved in the case were punished, but the criminal statute of limitations on the husband for buying the woman expired.

Recent volatility in overseas investment in China’s capital market is “normal and controllable,” an official with the foreign-exchange regulator told Caixin, after foreign investors offloaded securities in the first quarter amid a surge in Covid-19 outbreaks and the Russia-Ukraine war.

In Depth: Uncertainty and anxiety in Chinese private equity

Chinese technology stocks kick-started April with strong rebounds after a month of rollercoaster rides, fueling expectations that a brutal sell-off spanning more than a year may be approaching an end. But analysts cautioned that key uncertainties remain.

Chinese stocks trading in Hong Kong and elsewhere abroad performed abysmally over the past year, losing more than $1 trillion of their valuations. The rout reflects investors’ fears over uncertainties stemming from China’s growth momentum, industrial policies, geopolitical tensions and the pandemic. The chill has spread beyond the public market to the private equity investment circle.

China vows to use monetary policy tools at ‘appropriate time’

Officials will use monetary policy tools at an “appropriate time” and consider other measures to boost consumption, according to the readout from a meeting of the State Council chaired by Premier Li Keqiang Wednesday. Separately, the central bank published a draft outline for a stability fund to provide support to troubled financial firms.

Liu ― who also goes by Liu Qiangdong — will stay on as board chairman and “continue to focus on guiding the company’s long-term strategies, mentoring younger management and contributing to the revitalization of rural areas,” the Beijing-based JD.com said Thursday in an exchange filing.

SoftBank-owned Arm Ltd.’s transfer of its stake in its wayward China joint venture may expose the British semiconductor design giant to the risk of losing some of its licensing income from the unit, analysts warned.

Arm shifted its 47.3% holding in Arm China to a special purpose vehicle that it jointly owns with SoftBank Group Corp., the company’s spokesperson told Caixin April 1. Arm will continue to own the stake indirectly, and its licensing agreement with the Chinese firm will remain intact, the company said.