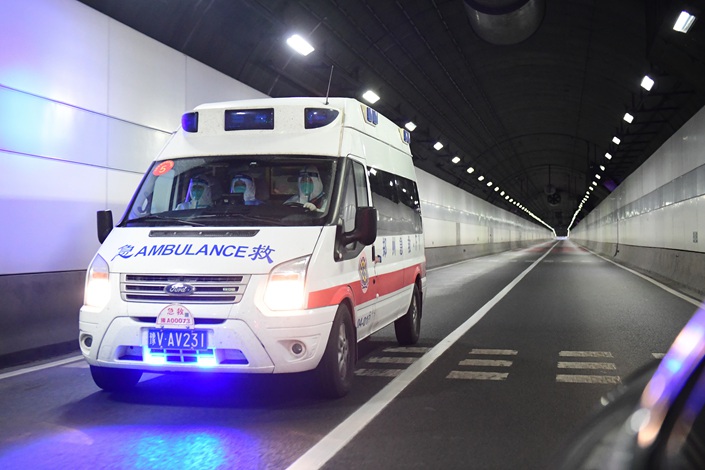 An ambulance from Henan province transports patients in Shanghai on May 8. Photo: VCG

The patient was delirious and vomiting, but Lin Mao and her fellow emergency room doctors were terrified of treating him.

The 67-year-old had tested positive for Covid-19 and was waiting for another test to determine whether it was a false positive, clearing him for admission to their hospital in Shanghai.

Lin feared the repercussions of overriding Covid rules to treat the man, even though his “situation was critical,” she told Caixin.

Southeast Asian exporters step up as China locks down

China’s strict “zero-Covid” strategy to contain the worst outbreak of the virus since early 2020 has caused logistics and supply-chain snarls that are hurting output and exports.

But it’s likely contributing to a boom in overseas shipments from rival Asian economies that have already lifted pandemic controls and restarted production, allowing their companies to pick up the slack. Vietnam — one of China’s main competitors in goods manufacturing — reported a 25.2% year-on-year jump in exports in dollar terms in April, accelerating from a 16.7% pace in March, figures compiled by economic data provider CEIC show.

Chinese President Xi Jinping and French President Emmanuel Macron agreed on the urgent need to restore peace in Ukraine through negotiations in a phone conversation Tuesday, according to China’s official Xinhua News Agency.

The two leaders held the phone call to discuss bilateral relations and exchanged opinions on the war between Russia and Ukraine, Xinhua said.

Su Shude, a former president and Communist Party chief of Everbright Bank’s Nanning branch in southern China’s Guangxi province, has been placed under investigation on suspicion of “serious violations of party discipline and law,” China’s top corruption watchdog said Tuesday. The allegation is a common euphemism for graft.

Goldman to relocate Morse as co-head for China business

A major auto parts supplier in Shanghai suspended production over the weekend after finding Covid-19 infections among workers. The shutdown of wire harness maker Aptiv’s factory may affect automakers including Tesla Inc. and General Motors Co.

One of Dublin-based Aptiv’s plants in Shanghai temporarily halted production Sunday in compliance with government guidance, the company confirmed with Caixin. The plant mainly supplies Tesla and GM factories in Shanghai, according to people familiar with the matter.

Charts of the Day: State-owned banks top list of China’s most profitable companies

China’s “Big Four” state-owned banks were the most profitable companies listed on the Chinese mainland last year, data from an industry association showed.

Industrial and Commercial Bank of China Ltd., the world’s largest bank by assets, reported a net profit of 350.2 billion yuan ($50.1 billion) in 2021, according to a statement released Monday by the China Association for Public Companies.

The transport of goods on China’s roads continues to face massive disruption due to virus control measures, one month after Beijing ordered local governments to ensure highway traffic could move smoothly.

China’s road freight volume index was down 18% year-on-year in the week ending May 8, the most recent data from information provider G7 show. The index measures truck traffic volume and the throughput of logistics hubs. That week was the first since late March to show a less than 20% drop.