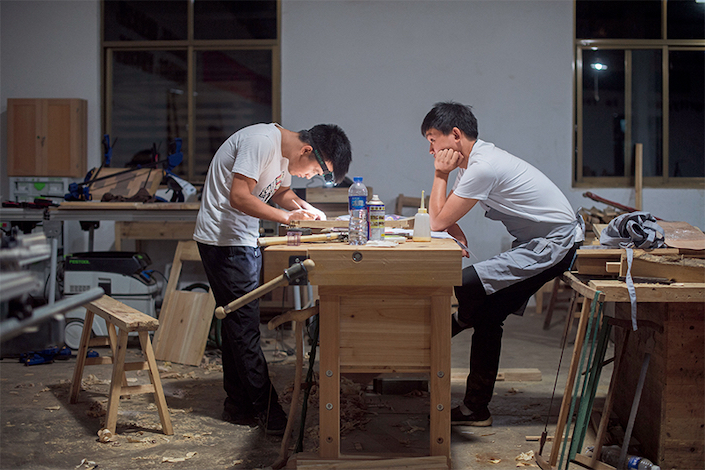 China will soon need millions of the kinds of skilled workers who keep an economy functioning, such as auto mechanics, heating and air conditioner repair people, electricians, plumbers and computer technicians.

Yet the vocational education system has fallen into a shambles, leaving the world’s second-largest economy ill equipped to replace millions of the highly skilled who are retiring as the population ages and the workforce shrinks. In 2021, 57.8% of Chinese between 18 and 22 years old were enrolled in higher education, according to the Ministry of Education. Meanwhile, the proportion enrolled in vocational high schools dropped to 35% in 2020 from 60% in 1998.

China’s Defense Minister Wei Fenghe explicitly warned the United States Sunday that it will go to war to defend its sovereignty over Taiwan if “anyone dares” to try to split the island from the Chinese mainland.

Addressing the Shangri-La security dialogue in Singapore, Wei said, “If anyone dares help Taiwan to secede from China, we will not hesitate to fight; we will fight at all costs; and we will fight to the very end.”

A northern Chinese city launched a targeted campaign against organized crime after a brutal assault on four women at a local restaurant sparked nationwide outrage and renewed discussion of sexual harassment and gang violence.

Opinion: Why no bystanders came to the rescue of women being assaulted in Tangshan

Feng Henian, a former official of China’s securities watchdog and current chairman of a major Chinese securities brokerage, was placed under investigation by the country’s graft busters for “serious disciplinary violation,” the agency said.

Feng, 60, was detained Tuesday by authorities, several people familiar with the matter confirmed with Caixin. Half a dozen people were also taken away for questioning, including his family members, they said. Feng’s residence in Beijing was raided, they said.

Chinese households saved more in the first five months as harsh Covid-19 restrictions and a continued slowdown in growth of family assets caused by the pandemic curbed spending.

In the January-to-May period, household savings increased by 7.86 trillion yuan ($1.17 trillion), about 50.6% more than the increase in the same period last year, according to data released Friday by the People’s Bank of China, the country’s central bank.

May lending in China accelerates faster than expected

Lending in China accelerated more than expected in May, boosted by a gradual resumption of production that was disrupted by Covid lockdowns in some parts of the country. Loan growth in April was the lowest in almost five years.

Banks extended 1.89 trillion yuan ($281.7 billion) of new yuan loans in May, an increase of 392 billion yuan from the same period last year and nearly triple the April low, according to data released Friday by the People’s Bank of China. Bank lending beat the 1.36 trillion yuan projected by economists in a Caixin survey.

A central Chinese province and some cities in the east of the country halved the amount of time visitors must spend in centralized quarantine as they relax Covid-19 restrictions.

Hubei province and some cities in Jiangsu province, including Nanjing and Xuzhou, have already begun implementing the new pandemic control policies, according to a WeChat-embedded mini program owned by the State Council, the country’s cabinet.

Editorial: China should deepen reforms and opening up to keep economy stable

Intensified regulation has left China’s once-hot medical beauty industry primed for a shake-up that looks likely to favor companies whose core technologies and products comply with the new rules.

An era of “strong regulation” began for China’s medical beauty companies in 2021, a year when watchdogs issued more than 20 new regulations designed to stamp out violations in the industry, Liu Wenzheng, an analyst at Minsheng Securities Co. Ltd., said in a March research report.

Property developers in South China’s Guangdong province asked the local government to relax restrictions that bar them from cutting prices as many struggle to shore up sales to keep much-needed cash coming in.

The developers’ request in Guangdong illustrates the Catch-22 that the country’s property market regulators have found themselves in. Allowing developers to lower prices could cause a market-roiling drop in housing values, while maintaining current restrictions risks further squeezing an industry that is already rife with companies teetering on collapse.

Didi Global Inc. delisted from the New York Stock Exchange (NYSE), less than a year after its blockbuster debut on the bourse.

On Friday, the ride-hailing giant’s last NYSE trading day, its American depositary shares closed at $2.29 apiece, down 84% from its IPO price of $14.