CX Daily: How China Is Trying To Get Debt Dodgers To Pay Up 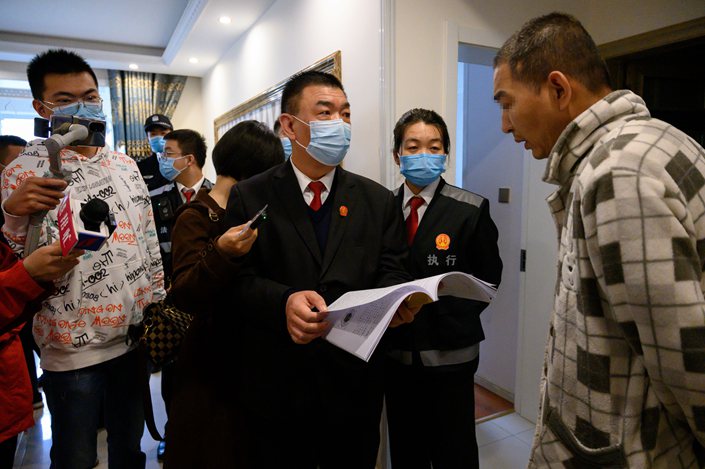 In Depth: How China is trying to get debt dodgers to pay up

China is pushing ahead with long-awaited legislation designed to crack down on the dishonest tactics that debtors — including government agencies — use to dodge court orders demanding they repay their debts.

In June, the first draft of the civil compulsory enforcement law was submitted to the National People’s Congress (NPC) Standing Committee for a first reading. Although drafts usually go through three readings before being passed by the top legislature, the submission brings China closer to its first law specifically on the enforcement of civil judgments — something many of the country’s legal experts and judicial officials have been calling for more than two decades.

China registered more than 11 million applications for the National Teacher Certification Examination this year, the highest since the country started requiring anyone who wants to be a public school teacher to take the exam in 2013, according to official data.

The figure was revealed as 10.76 million college students entered China’s already bleak job market this summer, competing fiercely for work as authorities struggled with record youth unemployment. More people are flocking to state jobs, including those at schools, in search of stability.

An accident involving an overturned ambulance in Qingdao Tuesday spurred a handful of good Samaritans to come to the rescue of the victims stuck inside. But instead of a message of thanks, the local pandemic control office issued a notice asking the rescuers to self-isolate, sparking criticism from social media users for the perceived lack of humanity.

The threatened delisting of Chinese companies from American exchanges is an opportunity for Hong Kong, and the Hong Kong Stock Exchange will consider speeding up reviews for their listing on the city’s bourse, the exchange’s chairwoman said.

Debt-ridden China Evergrande Group sold its remaining stake in Shengjing Bank for $1.05 billion to repay a debt, bringing down the curtain on a controversial investment in a regional lender in northeastern China.

An Evergrande unit in Nanchang divested its remaining 1.28 billion shares or 14.57% of Shengjing Bank through a public auction on a platform operated by Alibaba Group, sales records for the site showed. The stake, with an estimated market value of 7.56 billion yuan, went for the asking price of 7.3 billion yuan ($1.05 billion).

A city in China that witnessed wide-ranging mortgage boycotts by would-be homeowners is forcing property developers to resume stalled housing projects, including by threatening to investigate noncompliers for potential tax evasion.

Zhengzhou, capital of Central China’s Henan province, issued a notice to local officials and developers that construction on all stalled projects should be restarted by Oct. 6, Dahe Daily, a state-owned provincial newspaper, reported Wednesday.

Honda sets up new venture to procure batteries from CATL

The joint venture will be 50% owned by Honda Motor (China) Investment Co. Ltd. and 25% each by Dongfeng Motor Corp. Ltd. and Guangzhou Automobile Group Co. Ltd. (GAC). It is to be established by the end of this month.

Pan Shiyi, founder of Soho China, resigned as company chairman, and his wife, Zhang Xin, stepped down as CEO, the leading office builder said Wednesday in a filing.

The couple will remain as executive directors of the company and focus on their arts and philanthropic pursuits, Soho China said.