CX Daily: The Shadowy Businessman Behind a Multibillion-Dollar Bank Swindle 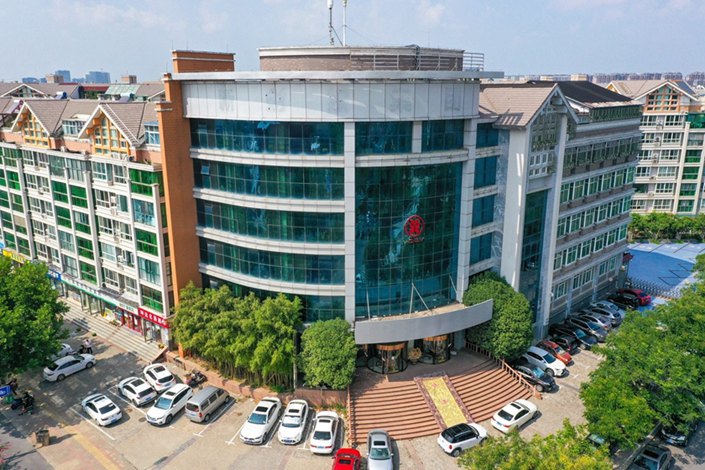 Lü was the controlling shareholder of Xincaifu Group Investment, a private company linked to several of the troubled village lenders involved in the Henan banking scandal. The company’s headquarters is located in Henan’s capital of Zhengzhou. Photo: VCG

In Depth: The shadowy businessman behind a multibillion-dollar bank swindle

Behind the multibillion-dollar swindle of hundreds of thousands of bank depositors across China that sent shockwaves through the nation’s banking system and resulted in the arrest of 234 people is a single shadowy businessman known as Lü Yi.

Police allege that Lü led a “criminal gang.” Although local authorities in central China’s Henan province briefly had him under house arrest early this year, the 48-year-old Lü has since eluded capture in the massive dragnet police deployed since the scam came to light in April. He spent years planning escape routes and went to the trouble of obtaining citizenship in Cyprus, people familiar with him told Caixin.

The Chinese Center for Disease Control and Prevention (CDC) disclosed details of the mainland’s first monkeypox case, saying the patient was a 29-year-old salesman who had recently visited Germany, where he had sex with men.

The man said he had sexual contact with men in Berlin Sept. 2, according to a weekly report published by the China CDC Monday. He subsequently traveled to Spain and developed symptoms including an itchy throat, fever and rashes. On Sept. 14, he returned to the southwestern Chinese municipality of Chongqing and was isolated in a local Covid quarantine facility, according to the report.

Another round of Covid boosters needed to help end pandemic in China, CDC says

Shanghai’s former top cop was sentenced to life in prison for corruption Wednesday, the same day the ex-police chief of Chongqing was sent away for 15 years, state media reported.

Gong Daoan, 58, who was also an ex-vice mayor of the city, accepted more than 73.43 million yuan ($10.4 million) in bribes between 1999 and 2020, according to Tangshan Intermediate People’s Court in North China’s Hebei province. He was accused of taking advantage of his position to help others get promoted and for other favors while working in a variety of government posts in Shanghai and Central China’s Hubei province.

Deng Huilin, 57, a former public security chief and vice mayor of the southwestern municipality of Chongqing, was sentenced to 15 years of prison and fined 4 million yuan by a court in Baoding, Hebei.

Zhang Long, former head of the investment and wealth management department of China Construction Bank (CCB), is being investigated on suspicion of severe disciplinary and legal violations, China’s anti-corruption body said Friday. The crackdown at CCB started early this year.

Hong Kong to start trial of e-HKD in fourth quarter

Hong Kong laid out an ambitious plan to develop its own retail central bank digital currency, the e-HKD, and will start a pilot program in the fourth quarter, joining the Chinese mainland in the pursuit of a digital fiat money for everyday use by the population.

The development of the e-HKD will follow what the Hong Kong Monetary Authority, the city’s de facto central bank, calls a “three-rail approach,” according to an announcement Tuesday.

Chinese LED-chip manufacturer Sanan Optoelectronics Co. Ltd. denied reports that another of its executives was detained, days after the nation’s top graft watchdog announced a probe into one of its directors.

In an exchange filing Tuesday, Sanan acknowledged that Ren Kai was under investigation but said online reports that a different executive had been detained at their office earlier that day were false.

China’s major courier service providers posted growth in revenue per order in August, which an analyst attributed to the scaling back of a sectorwide price war and improvement in the order fulfillment process.

The containerships cost $170 million to $230 million each and are expected to be delivered starting in 2025. Some of them will be methanol dual-fuel vessels, according to Norwegian shipping news media TradeWinds.