CX Daily: Illuminating The Silver Screen For The Visually Impaired 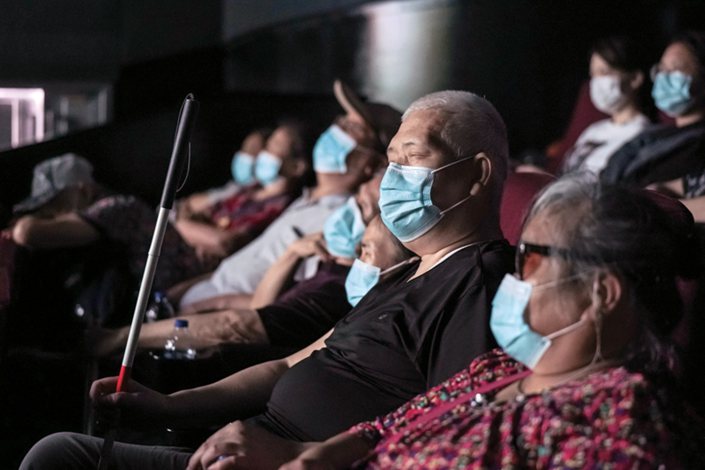 In Depth: Illuminating the silver screen for the visually impaired

Zhang Su’e lost her eyesight more than six decades ago after a bout of measles at the age of 2. However, the 64-year-old Beijinger is still a big fan of the movies.

On a recent August morning, Zhang and her husband went to a screening of a film that had been made accessible for visually impaired people. Throughout the film a timely and detailed audio description provided all kinds of visual information: every character’s appearance, scene transitions and changes in weather. Such audio services are like her white cane, Zhang said.

There are more than 17 million people with visual impairments in China, according to the World Health Organization. Public welfare advocates want to help them to engage in cultural activities such as watching movies without barriers.

Chen’s appointment was announced at a meeting of leading cadres in Shanghai Friday, the state-run Xinhua News Agency reported.

Beijing’s deputy party boss and deputy mayor, Yin Yong, was named to the additional post of acting mayor of the capital after the Beijing municipal legislature accepted Chen’s resignation as mayor, according to the official newspaper Beijing Daily.

The anti-corruption storm sweeping China’s largest policy lender snared yet another executive who is believed to have links with the bank’s convicted former chairman.

Liang Liang, deputy head of the market and investment department of China Development Bank (CDB), was placed under investigation “on suspicion of serious violation in law and discipline,” the Communist Party’s graft buster said late Thursday in a statement. The phrase often refers to corruption.

After detailed investigation with the external vendor, the cause of the software issue that led to the suspension was identified, the exchange said.

Nearly one-fifth of 300 companies surveyed by the American Chamber of Commerce in Shanghai said they are cutting investment in China due to recurring Covid-19 control measures, though more than half said they remained optimistic about the five-year business outlook.

ChemChina bought a 12% stake in Mercuria in 2016 for an undisclosed sum and two years later said it planned to increase its holding with Mercuria considering an investment in ChemChina at the same time. The two companies never disclosed the progress of those deals. ChemChina last year became part of Sinochem Holdings.

China exported 490 times as much synthetic ammonia in September as it did one year earlier after disruptions to Europe’s gas supply forced businesses there to reduce energy-intensive production of the chemical fertilizer component.

Chinese exports were up two-fold to 58,000 tons last month compared with August. That brought the total for the first three quarters to 105,000 tons, 48 times the amount shipped in the same period of 2021, according to the General Administration of Customs.