CX Daily: China’s ‘Zero-Covid’ Looks Done. So, What To Expect Next? 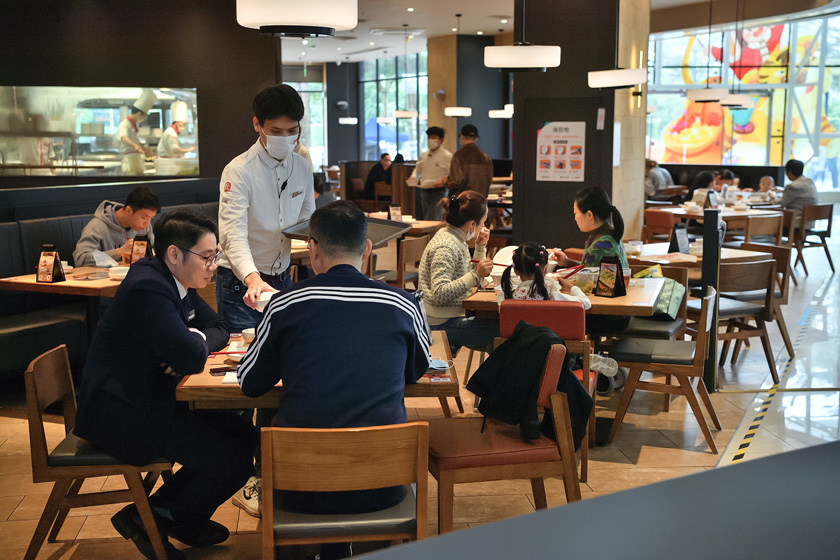 Diners wait their food at the restaurant area in a shopping mall in Tianhe district on Thursday. Photo: VCG

Cover Story: China’s ‘zero-Covid’ looks done. So, what to expect next?

It was the 25th day that Guangzhou resident Fang Yuan had been confined to her home under lockdown when she was disturbed by a loud noise. A cacophony of machinery and clearance work erupted to break the silence that had settled over the neighborhood after isolation barricades had gone up weeks earlier as Covid raged across the city and much of China.

Surprised by the commotion, Fang looked out her window and was astonished at what she saw: The red barricades were being torn down.

It was Wednesday, Nov. 30, which will likely go down as the day that China’s central government finally relented and began shifting away from its almost three-year-long hyper-restrictive “zero-Covid” policy that at times saw hundreds of millions under some form of lockdown.

The Caixin China General Services Business Activity Index, which gives an independent snapshot of operating conditions in services industries such as retail and travel, dropped to 46.7 from 48.4 in October. Readings of less than 50 indicate contraction.

The sustained contraction in services activity mirrored that in China’s vast industrial sector — the Caixin China manufacturing PMI for November, released Thursday, stood at 49.4, the fourth consecutive month of a below-50 reading. The Caixin China General Composite PMI, which covers both the manufacturing and services sectors, fell to 47 from 48.3 in October.

As the government tries to bring China’s economy back on track by gradually moving away from its “zero-Covid” policy, economists remain divided over the country’s growth projections for next year, with forecasts split between 4%-5% and 5%-6%.

Editorial: Reform and opening-up is needed to get China’s economy back on track

Reports of the death of billionaire Evergrande founder and Chairman Hui Ka Yan may have been greatly exaggerated.

Chinese stainless steel and nickel giant Tsingshan Holding Group Co. agreed with the government of Zimbabwe to expand its investment in steel and coke capacity and start cement and lithium mining and processing in the southern African country, Tsingshan said Friday.

Zimbabwe President Emmerson Mnangagwa and Tsingshan’s founder and Chairman Xiang Guangda oversaw the signing of the agreement Tuesday in Harare.