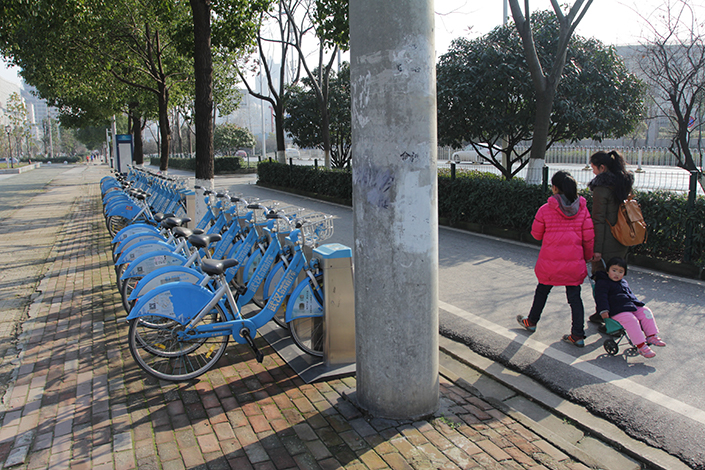 The local government-backed bike-rental service in the capital of Hubei province has announced it will shut down in the face of pressure from the shared bikes that have flooded into cities across China.

Wuhan Huantou, the operator of Wuhan’s bike-rental service, announced in a statement that its bicycle business will cease operation on Sunday. This will mean its 40,000 public bikes will be removed from the city’s streets.

Huantou said it will “transform and upgrade to continue providing intelligent management and smart transportation for the city,” but did not explain what specific services it will offer.

Launched in 2009, the bike-rental system in Wuhan had been touted as an example for other Chinese cities to follow, with its praised mix of public and private investment in which a private company builds the infrastructure and provides the bikes, while the government offers subsidies.

Huantou expanded rapidly since it replaced another company as the city’s main operator in 2014. Since the company took over, it has installed more than 2,000 parking racks and rolled out 40,000 bikes, providing 60 million rides, according to Huantou.

However, since early 2016, Wuhan, like many other Chinese cities, has seen its streets gradually invaded by private shared bikes that allow users to unlock bikes via a smartphone app and park them essentially anywhere.

Although shared bikes have proven popular, with 700,000 littering the streets of Wuhan alone, some have expressed regret about the path the bike rental sector has taken.

“Compared with the current shared bikes that have caused so many problems for the city, I prefer the ‘cleaner’ and ‘more orderly’ Huantou bikes … it is heartbreaking to learn the news,” Sina Weibo microblog user “Xingmaoqiu” wrote.

Huantou’s announcement comes at a time of uncertainty in China’s bike-sharing boom, with one of the country’s largest bike-sharing start-ups Bluegogo running into serious financial problems.