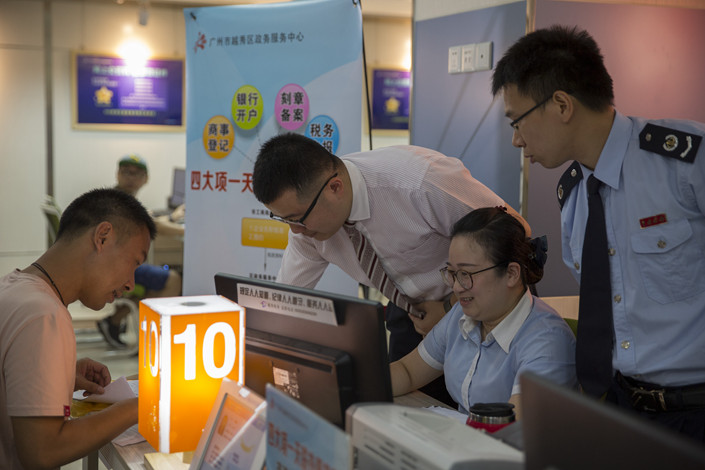 * The announcement came as China’s private sector continues to struggle with the combined impact of the trade war, a stock market rout and a credit crunch

(Beijing) — The State Council has endorsed the principle of “competitive neutrality,” which has been seen as a tool to create a fair business environment for private firms and shake up the stodgy state-run sector.

The State Council said at a weekly executive meeting led by Premier Li Keqiang on Monday that enterprises under all forms of ownership and sizes should be treated equally in accordance with the competitive neutrality principle, according to a post (link in Chinese) on the website of China’s cabinet.

Competitive neutrality means that state-owned and private businesses compete on a level playing field, according to a definition given by the Organisation for Economic Co-operation and Development, a club of mostly rich countries. The concept was initially conceived in Australia during the 1990s to ensure that private companies receive equal treatment with state entities when bidding on contracts.

The State Council’s move came after Yi Gang, governor of the central bank, said in October on the sidelines of the International Monetary Fund and World Bank’s meetings in Bali that China was considering adopting the principle as part of reforms of the state-run sector.

This announcement also comes as the private sector continues to struggle with the combined impact of the trade war, a stock market rout and a credit crunch. State-owned enterprises (SOEs) are weathering this year’s harsh economy far better than the private sector. A flurry of policies have emerged in the last two months to address this imbalance, including bailout funds, lower lending rates, tax breaks, expanded market access and promises of better legal protection.

The endorsement of the competitive neutrality principle continues a trend in recent years in which dozens of SOEs have unveiled plans to invite private sector investors to become shareholders under the “mixed-ownership reform” initiative. Even though Beijing has made attempts to strike a policy balance between state-owned and private companies, it has been widely criticized by the international community for continuing to grant privileged access and subsidies to SOEs.

SOEs, for instance, have advantages in the property industry, said Xiong Yan, chairman of asset management firm Beijing Wealth Capital Co. Ltd., at a forum (link in Chinese) this month. He said that SOEs whose major business is not centered on property should withdraw from the real estate industry to implement competitive neutrality.

The State Council, however, did not specify that the concept should be implemented in areas such as financing and administrative approval. Zhang Chunlin, a lead private sector development specialist at the World Bank, said that SOEs have privileges in terms of financing from other state-controlled entities, subsidies and low-interest loans from commercial banks.

Some analysts pointed out that the U.S. has in past used the competitive neutrality principle to impose pressure on its trade rivals. Despite such concerns, the principle can ensure efficient resource allocation and the healthy operation of the market, said Haitong Securities’ analysts in a research report. “The problems of some SOEs putting higher priority for political tasks over the profit of business operations still persist,” said the Haitong analysts, adding that this leads to the unbalanced allocation of resources.

“Beijing has spent considerable time trying to balance the interests of SOEs and private firms in this new normal (of slowing growth),” said Jeremy Stevens, a Beijing-based economist for South Africa’s Standard Bank, in October. “How to aid SOEs during a time when the old growth model — to which most of them are attached — is slowing and traditional policy levers are having less marginal impact is one of its main challenges.”

Ke Dawei contributed to this report.