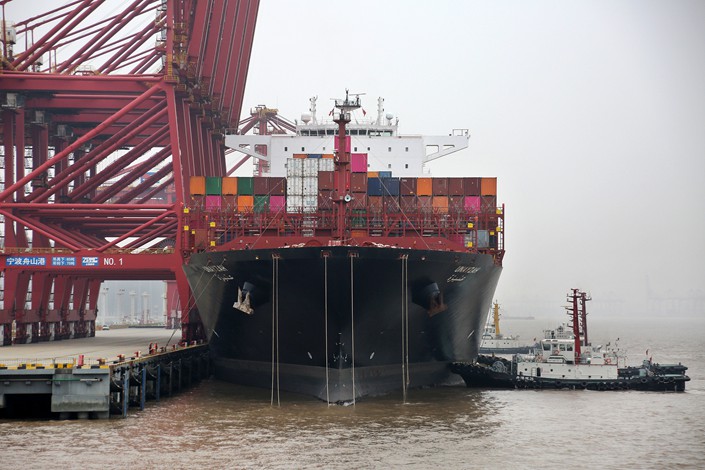 Our base case scenario for the U.S.-China trade war is that bilateral negotiations make enough progress for the two sides to continue to talk beyond March 1, tariffs do not go higher to 25% on March 1, but the threat of higher tariffs from the U.S. remains.

While there have been positive signs of progress in bilateral talks in recent weeks, we still think the chance of a “Grand Deal” is small given the big gaps between U.S. and Chinese positions on some core issues. We think the risk of further escalation is not negligible.

Although tariffs do not increase in our base case, we believe existing higher tariffs and remaining trade war uncertainties will likely dampen investment and confidence. As we believe yuan stability will be part of the bilateral discussions, we forecast the exchange rate for U.S. dollars to yuan will hover around 7 in 2019 — and possibly breach 7 at some point.

Our base case for the property sector is a moderate slowdown in 2019. We expect the fading of shantytown subsidies and weaker market sentiment to lead to a 5% decline in housing sales volume in 2019, though the relatively low inventory levels should cushion the drop in housing starts to 1-2%.

We expect property investment to remain in low-mid single digit growth, partly as credit access improves slightly for property developers amid general liquidity and credit easing. We think the central government will be unlikely to ease nationwide property policies significantly — of example, lower the down payment requirement — for fear of a property bubble. But some local governments may somewhat relax existing restrictions, such as the home purchase restriction, and banks may lower their mortgage rate premium and increase the mortgage quota. Such modest policy easing can help support sentiment and cushion the downturn.

While the market remains skeptical about the size and effectiveness of China's policy stimulus, our base case is that the government has the willingness and space to ease policies further to boost credit growth and infrastructure investment, which should help stabilize GDP growth at 6.1% in 2019.

We see monetary policy to rely more on quantitative tools and expect at least another 200 basis points cut from the reserve requirement ratio (RRR) and no benchmark rate move — though repo and MLF rates may be lowered to keep pace with the market. We believe easing liquidity, together with the expansion of government bond issuance and relaxation of some shadow credit channels, should help to boost overall credit growth from an estimated 9.5% in 2018 to 11% in 2019 despite banks' lingering reluctance to increase lending to the private sector or small and midsize companies.

Although additional tax cuts in 2019 will likely exceed 1% of GDP, we see the bulk of the near-term growth impact of fiscal stimulus coming from a greater than 10% increase in infrastructure investment.

Policy easing signals have become increasingly clear and loud since the Economic Work Conference in December, followed by strong pressure to increase lending to the private sector, a 100 basis point RRR cut and early allocation of local government bond quota. We expect these policy easing measures to lead to a rebound in credit growth starting in the first quarter of 2019, and increased infrastructure investment stabilizing growth starting in March or April. We expect growth for the first quarter to soften further from last quarter as headwinds from weak exports hit hard and domestic policy easing fails to bear much fruit. As the effect of policy easing becomes more apparent and infrastructure investment picks up in the spring construction season, we expect a notable rebound in in quarter-to-quarter sequential growth momentum.

Especially important for equity investors, although we forecast only a 0.4 percentage point year-on-year drop in real GDP growth in 2019, nominal growth is likely to drop by more than 2 percentage points as producer prices decelerate notably. We now expect producer price index inflation averaging only 0.2% and turning negative in some months during 2019. That said, we think continued supply side measures can help limit a decline in producer prices, and lower upstream costs may also be positive for some downstream producers if final demand holds up.

External uncertainty remains a key source of potential surprises, whether it is trade tension or global demand. In addition, the size and effectiveness of domestic policy support and the development of the property market and property policies are also where surprises may arise.

U.S.-China trade negotiations may proceed better than expected, in which case trade tensions may de-escalate, and existing higher tariffs may be rolled off. In such a case, we think both exports and confidence may be boosted, while domestic policy support may be smaller compared to our baseline forecasts. GDP growth will likely be higher at 6.2% while the yuan may appreciate somewhat against the U.S. dollar.

An equally likely surprise could be an escalation of the trade war and/or a sharp slowdown in China's external demand due to weakness in European or U.S. economies. In the worst case scenario where 25% tariffs are imposed on all Chinese exports to the U.S., we expect a 1.6-2 percentage point negative impact on China's GDP growth, but with a bigger policy stimulus, we expect growth to stabilize at about 5.5%. In the case of a full-on trade war, we see the U.S. dollar trading at 7.5 yuan.

Concerns about rising leverage and financial risk may lead to a smaller-than-expected policy stimulus in 2019. Moreover, policy easing may not be as effective as expected for a few reasons.

Third, the government may decide to rely more on tax cuts and private sector lending to stimulate growth, but if private investment intension and credit demand stay weak due to poor confidence and outlook, the government may belatedly ease more aggressively. In this scenario the growth rebound would come later than the second quarter of 2019, and full year growth may be slightly lower than our baseline forecast.

Our base case is for a modest property slowdown and some piecemeal easing of property policies. Property market sentiment may deteriorate sharply and activity may slow drastically, perhaps triggered by trade war escalation or tight controls on credit to the property sector. Such a scenario would lead to weaker commodity and appliance demand, and heavy industrial activities in China.

Conversely, if overall growth or property sales slow more sharply in early 2019, the government may relax property policies more significantly, including by lowering mortgage down payments substantially. Indeed such an expectation was widely shared among participants at the UBS Greater China Conference last week, so much so that very few investors seem to be concerned about a sharp property downturn this year. A major easing in property policy will likely boost GDP growth, and benefit commodities and other related sectors, but may make investors more worried about future sustainability of growth and financial system risk.

The market was disappointed by the slow progress in market opening and SOE reform in 2018. This year, the Chinese government may accelerate both opening and reform in accordance with its long-term plan and as part of the trade negotiation. Setting up state capital management companies, high-profile SOE mixed ownership reform cases, opening more sectors for private and foreign participation, and larger-than-expected corporate tax cuts together could help boost business and market sentiment. In the case of major reform measures and a de-escalation of the trade war, the yuan could appreciate against the U.S. dollar in 2019 rather than our base case of stability. Of course, the yuan may appreciate in the case of broad U.S. dollar weakness.