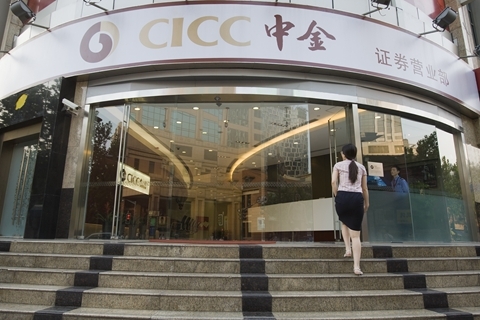 CICC is the largest underwriter and sponsor of Chinese IPOs. Photo: VCG

CICC: Rule on sponsors holding IPO stakes should be ‘temporary’

A rule that requires sponsors of IPOs on China’s new Nasdaq-style high-tech board to invest their own money in the IPOs should be only a "temporary” arrangement and can’t be a long-term mechanism, the country’s largest investment bank said.

The requirement is understandable because most of China’s investment banks and institutional investors have not established checks and balances, and the interests of investment banks in the primary market can’t be restrained in the secondary market, said Bi Mingjian, chief executive officer of China International Capital Corporation (CICC). The rule can be beneficial only if handled in the proper manner, Bi said.

Sponsors of an IPO on the new board are required to buy 2%-5% of the new shares they help to sell and hold the stocks for two years, according to the rules governing the new board released in early March. The aim is to ensure that sponsors conduct proper due diligence and select the best companies for the high-tech board to be launched on the Shanghai Stock Exchange.

Peng Chun, veteran banker and former chairman of the Bank of Communications Co. Ltd. — one of the country’s “Big Five” state-owned commercial lenders — has been appointed chair of China Investment Corp. (CIC), which manages the nearly $1 trillion sovereign wealth fund, we've learned. The post had been unoccupied for more than two years.

Despite being the largest of China’s four large asset managers, Huarong reported a dismal performance which it attributed to the corruption scandal of Lai Xiaomin, the company’s former chairman and Communist Party chief, who is awaiting trial.

The contribution of high-value-added industries to China’s overall economic inputs rebounded in March from a three-year low the month before, due to an increase of capital inputs in new economy industries, according to a private index released Tuesday.

The Mastercard Caixin BBD New Economy Index (NEI) rose to 28.3, indicating that new economy industries accounted for 28.3% of overall economic input. The reading was just off February’s 27.4, the lowest of available data dating back to March 2016, when the index launched. The NEI measures labor, capital and technology inputs in 10 emerging industries relative to those used by all industries.

Editorial: Lessons the new high-tech board can learn from the past

Chinese company Kunlun Tech has confirmed it's talking with the U.S. agency that reviews cross-border M&A for national security concerns over its ownership of Grindr, a popular U.S.-based gay dating app.

That confirmation comes about a week after foreign media first reported that the Committee for Foreign Investment in the United States (CFIUS) was pressuring Kunlun to sell Grindr over national security concerns. In its filing to the Shenzhen stock exchange, Kunlun confirmed its discussions with CFIUS but didn't elaborate.

Foxconn Industrial Internet, a unit of the world's largest contract electronics manufacturer, said Monday that it received orders for 5G gear from at least two “world-class customers.” The equipment is for delivery this year.

Gree Electric Appliances Inc. of Zhuhai, run by the outspoken Chinese businesswoman Dong Mingzhu, is facing an ownership shakeup as a state-owned shareholder is looking to sell its controlling stake in the home appliance giant.

Controlling shareholder state-owned Zhuhai Gree Group Co. Ltd., which holds 18.22% of the Shenzhen-listed company, is looking to divest part of its stake in a deal that could "lead to a change of Gree Electric’s ownership structure,” the appliance maker said in a stock exchange filing.

Shanghai-listed Dr. Peng Group is considering pulling away from competition with the country's state-owned carriers in consumer broadband markets, an internal source has confirmed.

Dr. Peng, one of China’s largest consumer broadband providers, currently competes with China's three biggest carriers — China Mobile, China Unicom and China Telecom — which are all state-owned. Dr. Peng will switch to providing broadband services to these carriers as a partner.

The amount of coal power capacity under construction globally increased 12% in 2018 from the year before, a trend researchers said was due primarily to China, based on satellite photos that revealed the nation had “quietly resumed” construction of a number of sites previously reported to have been suspended by central government rules.

This is despite a 20% global drop in newly completed coal-fired plants last year and a 53% drop over three years, as well as a 39% decrease in construction starts on such projects, according to the report by environmental nongovernmental organizations Global Energy Monitor, the Sierra Club and Greenpeace.