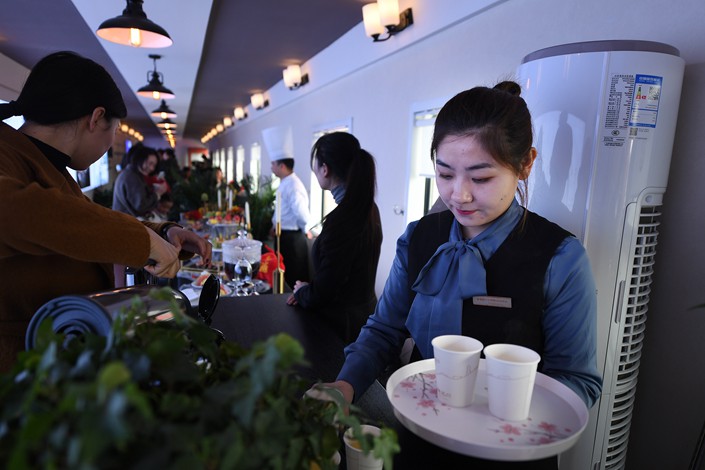 China’s services activity expanded at the fastest pace in 15 months in April on solid growth in both domestic and foreign demand, a Caixin survey showed Monday.

The Caixin China General Services Business Activity Index, which provides a snapshot of operating conditions in the country’s services sector, edged up to 54.5 in April from 54.4 in the previous month. The reading marks its highest point since January 2018 and the second highest since May 2012. A reading above 50 indicates expansion, while anything below signals contraction.

Despite stronger expansion in the services sector, weaker growth in the manufacturing sector dragged down the Caixin China Composite Output Index, which covers both manufacturers and services providers, to 52.7 in April from 52.9 in the previous month.

Services companies continued to signal solid growth in the amount of total new business they received in April, although the rate of growth slowed marginally from March’s 14-month high, the survey showed. New export business posted a “sharp and accelerated increase,” supported by stronger demand across key overseas markets and companies’ greater efforts to expand their client bases, the survey said.

The gauge tracking employment in the services sector stayed in expansionary territory and increased to a 10-month high, with some companies linking growth to increasing new business, according to the survey.

Input prices increased at the fastest pace in seven months in April, signaling higher cost burdens on services companies, according to the survey. The rate at which companies raised the prices they charged customers was at a level not seen since June. “Pressure on costs across the services sector remained relatively high, limiting companies’ profit growth potential,” Zhong said.

The gauge measuring business expectations among services providers fell in April from the month earlier despite remaining in positive territory. “Although firms were, on average, optimistic that business activity would increase over the next year, the level of positive sentiment remained subdued overall,” according to the survey.

The services sector, also known as the tertiary sector, includes finance, real estate services, marketing, transportation and retailing. In the first quarter of this year, the sector accounted for more than 57% (link in Chinese) of China’s gross domestic product and contributed to more than 60% (link in Chinese) of economic growth. Policymakers count on the services sector to create jobs as it’s more labor-intensive than manufacturing.