By Zhou Chen and Jason Tan 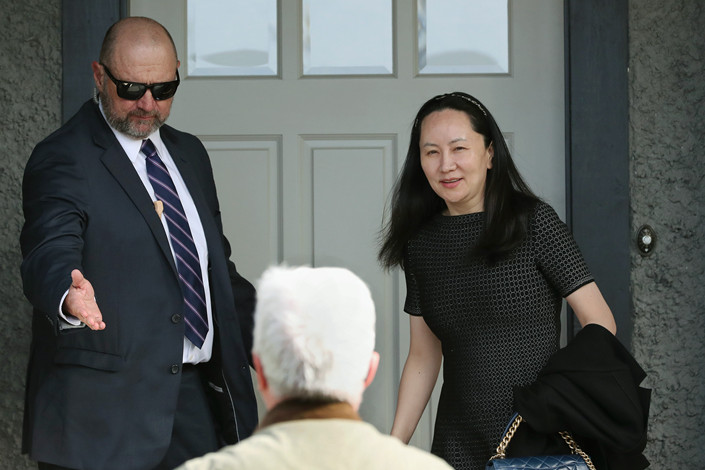 The legal team of the Huawei Technologies financial chief has argued for a stay to extradition proceedings, in part due to statements made by President Donald Trump which they say imply her arrest was “politically motivated.”

The argument was made by Meng Wanzhou’s defense lawyers at the British Columbia Supreme Court on Wednesday, a hearing at which Meng was present.

The Canadian court granted Meng’s request to move from her current residency to a newly renovated $10 million mansion for “greater privacy,” as she sits under house arrest pending resolution of her extradition case.

In December, Meng, 47, was arrested in Vancouver by the Canadian authorities at the request of the U.S., which is seeking her extradition on fraud charges over the dealings of Huawei Technologies Co. Ltd., the world’s largest telecom-equipment maker, with a company in Iran.

After the arrest, Trump told Reuters he would intervene in the U.S. case against Meng if it would help close a trade deal with China. Tensions between Beijing and Washington heightened this week amid further uncertainties brought forward by a trade war.

Huawei reiterated in a statement on Wednesday that Meng’s arrest “was an unlawful abuse of process,” and that it was guided by “political considerations and tactics, not by the rule of law.”

Beijing in March vowed to continue its support for Huawei and Meng in “seeking legal redress to protect their own interests and refusing to be victimized like silent lambs.”

“China has and will continue to take all necessary measures to resolutely protect the legitimate and lawful interests of Chinese businesses and citizens,” Minister of Foreign Affairs Wang Yi said in March. He added that it is a country’s fundamental right to develop its technology.

Along with rallying allies including Britain and Australia, Washington has recently banned government agencies from buying Huawei’s 5G gear over concerns of Chinese surveillance.

Meng’s lawyers on Wednesday did not say when they would apply for the stay of the extradition hearing, whose date has not been set. But Meng is set to next appear in court on Sept. 23, when her defense team will make more applications for further disclosure surrounding her arrest at the airport. The extradition process could take years.

The defense team also said Wednesday that the arrest violated a core principle of the Canada-U.S. Extradition Treaty and Canadian extradition law, because Canada does not impose sanctions on financial services in relation to Iran. Therefore, they argue, the extradition request does not satisfy the “double criminality” requirement, because she has not broken Canadian law.

The Supreme Court approved Meng’s petition to modify her bail terms, which included a request to move from her current C$5 million ($3.71 million), six-bedroom residence near a park to an estate more than triple the size in one of Vancouver’s fanciest neighborhoods. She’ll be just two doors down from the U.S. consul general’s residence, where the star-spangled banner flaps on the front lawn.

“The existing home is a corner lot, exposed on three sides, there isn’t clarity between public and private portions,” one of Meng’s defense lawyers, David Martin, told the court. “Currently, large numbers of people go there, sometimes approach the house.”

Such nuisances would be minimized with the move. The new home in the Shaughnessy neighborhood is larger and enclosed, allowing her paid bail monitors “to carry out their duties more effectively and fully within the gated property,” Martin said. Meng plans to relocate on Saturday, according to an affidavit filed by her bail monitor.

Meng’s bail conditions allow her to freely roam a 100-square-mile (62-square kilometer) patch of Vancouver as long as she’s accompanied by her monitors.