By Liu Shuangshuang and Han Wei 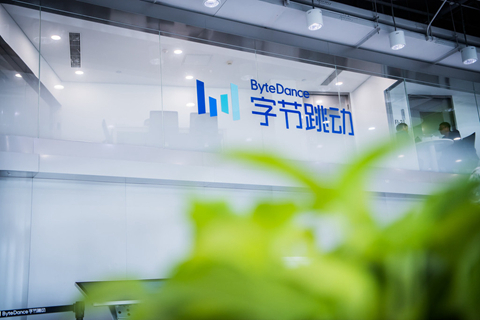 Aggregation specialist ByteDance Ltd. has launched an offensive against some of the world’s biggest internet names, rolling out a challenger to Tencent's WeChat as it also sets its sights on global music giants Spotify and Apple Music.

This week TikTok owner ByteDance added a new app to its large portfolio to challenge Tencent’s stranglehold on the social networking market in the world’s most populous country.

Launching Flipchat on Monday, ByteDance described its new instant messaging application as “an open social product.” The app is known as Feiliao in Chinese and is seen as a direct challenger to Tencent Holdings’ WeChat, which boasts 1.1 billion users worldwide.

Combining instant messaging, mobile payment systems and other functions, WeChat has brought revolutionary changes to daily life in China. In 2018, users sent 45 billion messages and made 410 million calls through the app each day. But after years of rapid expansion, some analysts say WeChat has peaked and is starved for new ideas.

ByteDance also plans to introduce a new music app as early as this fall in a handful of markets, mostly in less developed countries where paid music services have yet to garner a large user-base, according to people familiar with the matter, who asked not to be identified because the plans haven’t been announced.

The company has already secured rights from T-Series and Times Music, two of India’s largest labels, according to executives with those companies.

The competition is heating up just as the explosive growth of China’s mobile internet market is slowing. In March, monthly active users on mobile internet grew at a record low 4% to 1.1 billion, according to market information provider QuestMobile.

ByteDance, the world’s most valuable startup and the parent of popular mobile apps such as TikTok and Toutiao, said its new app Flipchat is available for iOS and Android systems and includes functions such as instant messaging, group chat, video calling and personal updates.

Apart from the messaging function, ByteDance emphasized Flipchat’s interest-based forums feature, which allows users to create open or private groups of as many as 3,500 people.

“We hope Flipchat will connect people with the same interests and make people’s lives more diverse and interesting,” ByteDance said in a statement.

Links to download Flipchat are not accessible on WeChat.

ByteDance came to prominence through its news-aggregator platform Toutiao and grew into the world’s most valuable tech startup over six years. The company reportedly secured $3 billion in its latest funding round in January, giving it a valuation of $75 billion.

One of its most popular offerings, Douyin, a short video-sharing app known internationally as TikTok, had a daily active user base of 250 million by January, surging from just 1 million a year ago.

ByteDance has shown its ambition in the social networking market. Chen Lin, chief executive officer of Toutiao, said in January that social networking is a major field that ByteDance wants to tap and the company is mulling more new products in the sector.

But ByteDance and sponsors of other new WeChat rivals have faced lukewarm market reception after high-profile debuts. A person close to Duoshan said the service’s number of daily active users has remained between 5 million and 6 million and occasionally dropped as low as 1 million after a surge during the Chinese New Year holiday in early February.