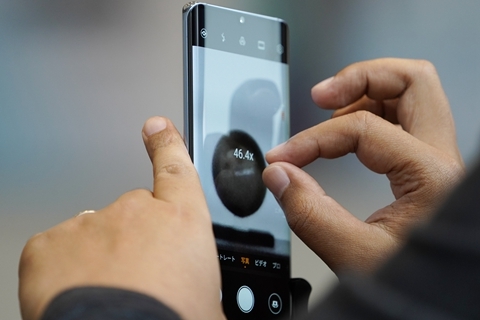 Huawei debuted its new P30 models in Japan on May 21. Photo: VCG

Japan’s largest telecom operators NTT Docomo, SoftBank Corp., KDDI Corp. and UQ Mobile said Wednesday they will put off sales of Huawei’s newest P30 handsets without providing an explanation or a timeframe for resumption. The companies were scheduled to release the new products in late May, according to their websites.

The Chinese company has been hit by increasing headwinds since the U.S. Department of Commerce put the company on its “Entity List,” a move that would effectively ban it from buying crucial components from U.S. suppliers.

Several U.S. companies including semiconductor giant Qualcomm Inc., chip designer ARM and Alphabet Inc.’s Google have said that they would comply with the order to cut off business with Huawei.

These moves are expected to deal a severe blow to Huawei, which currently relies heavily on outside suppliers in key areas from chip-making to base stations. Huawei said it imports about 30% of its components, or about $11 billion annually, from American companies.

Read More
What Did Huawei Founder Say About U.S. Blacklisting?

Fu Liang, an independent telecom analyst, said the Japanese carriers’ move is another big setback for Huawei as sales through mobile service providers are a major part of Huawei’s presence in Japan’s smartphone market. “It is a hard time for Huawei,” Fu said.

A greater challenge facing Huawei’s smartphone business stems from the loss of access to Google services such as Google Maps and cloud service, although Huawei would still use the open-source version of Google’s Android system on its devices, Fu said.

A Google spokesman Monday told Caixin that the company is “complying with the order and reviewing the implications,” adding that its proprietary apps and services will continue to function on existing Huawei devices.

The frozen business ties would cast a shadow on Huawei’s ambition in consumer business while its corporate business is facing greater security scrutiny abroad. The business segment, including sales of smartphones, tablets and other devices, reported 45% growth in 2018 revenue to 348.9 billion yuan ($50 billion). In the first quarter, Huawei overtook stumbling global tech giant Apple Inc. to become the world’s second-largest smartphone-maker behind Samsung.

Huawei’s consumer business head Yu Chengdong in November said he expected the company’s smartphone sales to surpass those of Samsung by 2020.