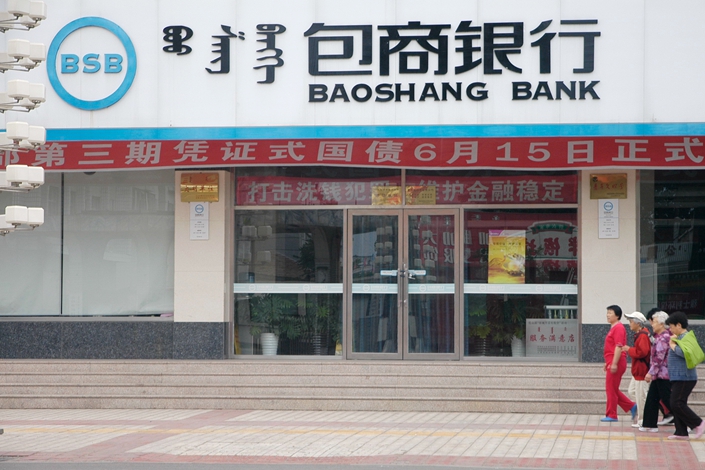 Regulators assumed control of Baoshang Bank, a small lender based in Baotou in the Inner Mongolia autonomous region, on May 24. Photo IC Photo

China’s central bank has sought to ease concerns about growing risks in the financial sector in the wake of the recent government takeover of private regional lender Baoshang Bank Co. Ltd., saying the move was a one-off and there are no plans for similar action in the near future.

Baoshang Bank is an isolated case and its seizure by the authorities is linked to the embezzlement of funds by its controlling shareholder, financial conglomerate Tomorrow Holding, which created significant credit risks for the bank, the People’s Bank of China (PBOC) said in a statement (link in Chinese) on Sunday aimed at preventing further unnecessary panic in the markets.

“Recently, some market participants have become worried that there will be more takeovers of other institutions,” the PBOC said. “Please rest assured that there’s no such plan as yet. If an institution requires liquidity support or needs to raise capital, it can do so in market-oriented ways.”

The central bank also tried to calm jitters about the impact on domestic financial markets after it injected a net 430 billion yuan ($62.3 billion) into the money markets last week, the most since January, saying that current liquidity levels are ample and that financial risks are under control. Many small and midsized banks rely heavily on the interbank market, which oils the wheels of the financial system, to borrow short-term money. Disruption to the market or loss of confidence can trigger instability.

“We are confident in our ability to resolutely maintain the stability of the financial system,” the statement said. A cut to the reserve requirement ratio of small and midsized commercial lenders announced in May will take effect on June 17, which is expected to release 100 billion yuan in long-term funds into the market.

Regulators assumed control of Baoshang Bank, a small lender based in Baotou in the Inner Mongolia autonomous region, on May 24, the first direct takeover of a commercial lender in more than 20 years, triggering fears that its problems could spread through the financial system and that other small Chinese banks faced similar risks. Speculation grew that the move was connected to Tomorrow Holding, the vehicle of finance tycoon Xiao Jianhua, a link confirmed by the PBOC statement that also said the company held 89% of the bank’s shares. Xiao has not been seen in public since January 2017 and is believed to be under investigation by China’s anti-corruption authorities.

A source familiar with the bank previously told Caixin that Xiao used the lender as his ATM.

In an effort to calm the concerns of Baoshang Bank’s depositors, the PBOC issued a statement on Friday saying that all of the bank’s retail depositors and individuals who bought its wealth-management products have had their investments fully protected by the authorities. Corporate and interbank creditors will also have claims of up to 50 million yuan per entity guaranteed, it said. Those with claims of more than 50 million yuan, will have at least 80% of their investments guaranteed.

The last commercial financial institution to be taken over by the government was the Hainan Development Bank, which was shut down and liquidated in 1998.

Despite the regulatory takeover and efforts to stabilize sentiment, the Baoshang Bank case has added to concerns that the financial health of small and midsized commercial banks is deteriorating amid an economic slowdown and tighter supervision that’s forcing them to step up recognition of nonperforming loans.

Institutional investors have been dumping short-term debt securities of Bank of Jinzhou, a Hong Kong-listed lender based in the northeastern rustbelt province of Liaoning, amid growing concerns about its financial stability. The bank, whose shares have been suspended since April 1, issued a statement that day and again on May 14 postponing the release of its 2018 annual report.

Its auditors Ernst & Young Hua Ming LLP and Ernst & Young, which were appointed last year, resigned on May 31, noting its inability to obtain additional information from the bank about loans made to some institutional customers that were not consistent with the purpose stated in their loan documents.

As of May 27, more than 20 banks had announced delays in releasing their annual reports, according to research by Huatai Securities Co. Ltd. They are mostly city commercial banks and rural commercial banks that attributed the delays to unfinished auditing of their accounts by external auditors, it said.

The takeover of Baoshang Bank has allowed regulators to ensure the bank operates as normal as much as possible and to avoid a domino effect, a person close to the PBOC told Caixin. Losses faced by the lender’s creditors have been limited and are under control, the person said.

Regulators are now so busy working on Baoshang Bank and managing the fallout that markets won’t have to worry about any follow-up regulatory campaign for at least a year, he said.

In an indication of the stabilizing impact of the takeover and a recovery in sentiment, Baoshang Bank on Monday issued a 1 billion yuan negotiable certificate of deposit (NCD), a fundraising tool used by banks in the interbank market. The certificate, which will mature in December and pay an expected interest rate of 3.25% on maturity, was fully subscribed. On May 23, the day before regulators stepped in, the bank only managed to get subscriptions for 550 million yuan of a 1.5 billion yuan NCD.