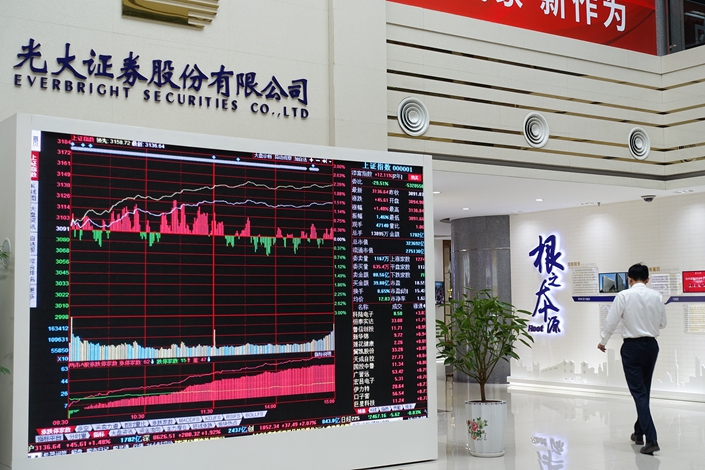 A subsidiary of brokerage Everbright Securities Co. Ltd. has been sued for 3.5 billion yuan ($506.75 million) for failing to live up to an agreement related to the bungled acquisition of a now-bankrupt British media company.

In its lawsuit, China Merchants Bank Co. Ltd. demanded that Everbright Capital Corp., wholly-owned subsidiary of Hong Kong- and Shanghai-listed Everbright Securities, keep its promise to compensate the bank if its investment in the British sports media company, MP & Silva Holding SA, failed to pay off, according to a filing to the Shanghai Stock Exchange on Saturday.

China Merchants Bank was a senior tranche partner in an investment vehicle that Everbright Capital helped set up to acquire 65% of MP & Silva. The bank invested 3.2 billion yuan in the deal, but with an agreement from Everbright Capital that the latter would pay it 3.5 billion yuan in compensation if the senior partners were unable to “exit the investment,” according to the annual report that Everbright Securities filed to the Hong Kong Stock Exchange.

Everbright Capital never got the chance to get out of its investment because MP & Silva ran into problems soon after the acquisition was completed in May 2016. According to insider sources cited by Bloomberg, the British company failed to retain its most experienced dealmakers and lost its most important sports broadcasting contracts, while several contracts went unpaid. In October 2018, the U.K.’s High Court declared the company bankrupt, and ruled that its remaining assets would be liquidated.

It was Baofeng Group that was supposed to provide the other investor with their exit. It had promised to purchase all of MP & Silva’s shares from the investment vehicle within 18 months after the deal was completed, but never followed through.

Due to the bankruptcy, Everbright Securities wrote off 1.52 billion yuan in impairment losses for 2018, which caused its year-on-year profit to plummet 96.57%, according to its annual report.

The MP & Silva bankruptcy has already resulted in several other lawsuits among the various partners in the deal. Everbright Capital has filed its own lawsuit against Baofeng Group in a Beijing court, demanding 751.19 million yuan in compensation.