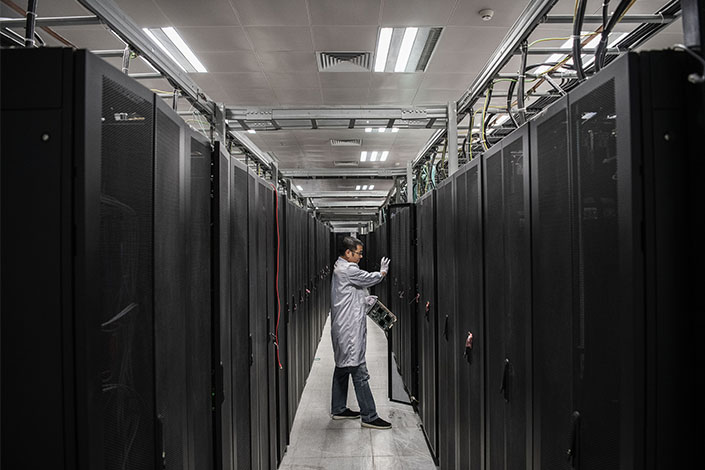 A Huawei engineer opens the door of a server unit at the Cyber Security Lab in Dongguan, Guangdong province, on April 25, 2019. Photo: VCG

Major mobile network operators in the U.K. have argued that the Chinese telecom giant Huawei Technologies Co. Ltd. should not be excluded from the country’s rollout of the next-generation 5G network.

The risks of using Huawei technology are manageable, as long as the Chinese company’s products are not deployed in the core of the 5G network, executives from four U.K. mobile carriers — EE Ltd., O2, Three UK, and Vodafone — told members of parliament at a hearing in the House of Commons on Monday.

“As we are deploying 5G in non-standalone mode, any site that we want to deploy 5G in, about one third of our network, requires Huawei 5G equipment. We do not use Huawei in the core network,” said Scott Petty, chief technology officer (CTO) at Vodafone, told the Science and Technology Select Committee of the House of Commons, the lower house of parliament.

The position was echoed by Alex Towers, director of policy and public affairs at BT Group, the owner of EE, and O2’s CTO Brendan O'Reilly, as well as Patrick Binchy, CTO of Three, according to a transcript of the hearing.

The U.K. has defied a U.S. government call for its allies to completely exclude Huawei from the rollout of their 5G networks, due to the security risks they say the Chinese tech group poses. The U.S. argues that Chinese law obliges Huawei to cooperate with the Chinese government, making it a national security threat. Huawei has denied those claims.

The U.S. last month put Huawei on an export blacklist, cutting its access to critical technologies and services from U.S. companies from chipmaker Qualcomm Inc. to Alphabet Inc.’s Google.

EE, O2, Three, and Vodafone — own nearly 90% of the U.K. market. They all currently use Huawei products in their 4G networks, the representatives told the committee. That made it hard for the mobile carriers to completely shun Huawei in building their 5G networks, as removing Huawei products from their existing 4G networks would incur enormous costs, Vodafone’s Scott Petty said.

Questioned at the hearing, John Suffolk, Huawei’s global cybersecurity and privacy officer, told lawmakers that the national champion was independent of the Chinese government.

“Why don’t you just admit the fact that Huawei is obligated to cooperate with the Chinese intelligence services in China?” Lewis asked.

“There are no laws in China that obligate us to work with the Chinese government on anything whatsoever,” Suffolk responded, adding that the company had consulted Chinese law professors on the subject.

“I am saying that what that means, according to our legal advice, is that it does not require Huawei to undertake anything that weakens Huawei’s position in terms of security,” Suffolk said.