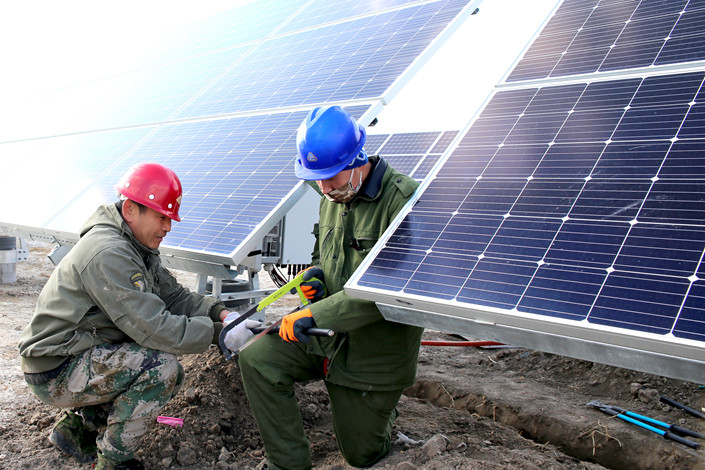 They tried to make hay while the sun shone, but were left with mountains of debt.

Now, after driving the rapid development of China’s solar power capacity, debt-saddled private energy companies are being picked apart by the state sector that has swooped in to purchase their assets.

Ironically, the private sector’s retreat appears to be largely due to the phasing out of overly generous state subsidies, with the state’s rise coinciding with the greater marketization of electricity pricing.

The most recent sign of this trend occurred earlier this month when a subsidiary of state-owned China Huaneng Group Co. Ltd. signed a “cooperation intent agreement” to buy a 51% stake in solar power producer GCL New Energy Holdings Ltd. (GNE), according to a filing posted by its parent, GCL-Poly Energy Holdings Ltd., on the Hong Kong Stock Exchange.

It follows a spate of similar sales in recent months, with Jiangsu Akcome Science and Technology Co. Ltd. selling 28 projects in September and with Zhejiang Chint Electrics Co. Ltd. and Kong Sun Holdings Ltd. all offloading projects. More sales and transfers of solar plants took place in the second half of 2018 than in the three preceding years, according to an industry white paper (link in Chinese) from consultancy PriceWaterhouseCoopers and other partners.

The rise of subsidies

The recent sell-off marks a major reversal of fortune for private companies that were initially at the forefront of developing China’s solar industry. The country’s solar capacity grew more than tenfold from 16.23 gigawatts (GW) to 174 GW at the end of last year as private companies looked to vacuum up generous government subsidies, largely in the form of high guaranteed prices for electricity.

Such subsidies delivered returns to investors in solar projects of around 15% to 20% a year in 2015, much higher than the average annual yield of 8% seen in domestic manufacturing, for example. Private companies rushed into the industry, often with generous financial support from lenders that helped to them overcome the limitations of their often relatively small upfront capital — and they rapidly accrued debt.

GCL New Energy was typical of this debt-fueled expansion. The company more than doubled its installed capacity to 7.3 GW between its listing in Hong Kong at the end of 2014 and the start of 2018. Its liability-to-asset ratio remained relatively stable around the 84% it recorded at the end of last year, according to its 2018 annual report. Yet financing costs ballooned by almost two-thirds between 2017 and 2018, when they reached 2.3 billion yuan.

The plug gets pulled

The industry appeared willing to countenance high level of debts while the subsidies remained. But the government took many by surprise in May 2018 when it announced that it would move to phase out subsidies, in what became known as the “531” policy. This caused general uncertainty across the industry, prompting panel orders to be slashed for producers and shares to slide at several major industry leaders where layoffs loomed.

Shi Jingli, a researcher at the Energy Research Institute under state planner the National Development and Reform Commission, explained the government was purchasing electricity at a relatively high price in 2016 and 2017, but this price did not keep track with producers’ falling production as solar technology became much more cost effective. These high returns encouraged an even more irrational investment boom, with solar power producers borrowing heavily to try to cash in, Shi said.

Subsidies were also rapidly spiraling out of control, with Wang Bohua, the secretary general of the China Photovoltaic Industry Association, estimating in January that the government still owed 60 billion yuan ($8.7 billion) in subsidy payments for 2018, with costs growing. Such delays contributed to the decision to sell the 51% stake in GCL New Energy, which received 1.47 billion yuan in subsidy payments in 2018. That was 60% less than a year earlier, according to the company’s 2018 financial report.

Industry insiders say delayed government subsidy payments, in tandem with the prospect of lower returns, have led to sell-offs as private companies grapple with major debts accrued in the heyday of subsidies. The income from the sales “is a lifeline,” the head of a business department of a private solar company told Caixin. Yet at the moment the industry is in a buyer’s market, and prices are much lower than might have been expected a year or so ago, he added.

Many of the buyers in the recent wave of solar sales have come from the state sector, which has traditionally been more heavily involved in thermal power generation but which is making inroads into renewables as part of a government drive to cut pollution. Earlier this year Huaneng Energy boss Shu Yinbiao told Caixin his company is looking to expand its renewables capacity as it becomes more difficult to gain approval for coal-fired power plants. Currently renewables constitute 40% of the company’s total 176GW of capacity.

While large state-owned enterprises (SOEs) might be able to better manage debts received as part of acquiring solar projects, central enterprises are still being circumspect when assessing risks, said Sun Peng, a senior figure in the risk department of a subsidiary of China Huadian Corp. SOEs still face strict rules regarding the ease of a potential acquisition’s access to the grid, and project investments should still make a return of 10%, he added.

Similarly, a senior figure at a renewable energy unit of China Three Gorges Corp., told Caixin that risks are the main consideration for the state sector. “We’re not going to buy private solar companies just because they’re facing cash flow problems,” he said.